Stripe rust continues to be the top disease story for Kansas wheat in 2020, as the growth stage of the crop across the state ranges from heading (Feekes 10.1) to ripening (Feekes 11). In several counties in southwest Kansas (including Pratt, Kiowa, Clark, Meade, Hodgeman, and Pawnee), stripe rust has been reported for the first time, or has moved from the lower to the upper canopy (Figure 1). 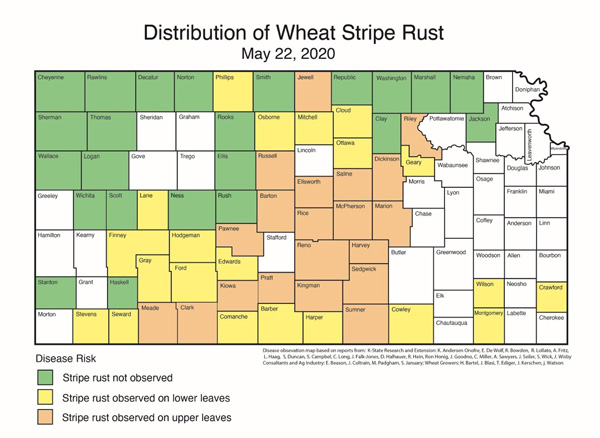 In addition to stripe rust, leaf rust has also been reported in Saline and Rice counties and may become a problem in surrounding areas. Leaf rust can be differentiated from stripe rust by visibly darker spores that are scattered, not striped, across leaves (Figure 2). Leaf rust typically does not infect heads or stems. Leaf and stripe rust can both result in yield loss, particularly if the flag leaf is showing symptoms on many plants within a field.

Along with foliar diseases, Fusarium head blight continues to be a concern for southern and central Kansas. Fusarium head blight development is favored by rainy weather in the week prior to flowering and during the flowering period, which we have seen in several parts of Kansas. A convenient risk tool is available (http://www.wheatscab.psu.edu/) which provides current risk for head blight across the United States. Eastern and central Kansas have been at high risk for several days, according to this tool. Fungicide applications for Fusarium head blight control should be made at the start of flowering for optimal control, but research has found that applying a few days before or after early flowering can still provide adequate control when there is high disease pressure. Fungicide is most effective when applied to varieties that are known to be susceptible. Currently Caramba 0.75 SL, Proline 480 SC, Prosaro 421 SC, and Miravis Ace SE are labeled for control of Fusarium head blight and have performed well in independent tests conducted by Kansas State University and collaborating institutions. More information about these and other products can be found here: https://bookstore.ksre.ksu.edu/pubs/EP130.pdf

Although some producers have already made their fungicide decisions, many may still be considering an application. It is important to review not only how well a fungicide works against a disease of concern, but also label restrictions. Many fungicides have harvest restrictions and cannot be applied past a certain growth stage (for example, Feekes 10.5.4) or a certain number of days prior to harvest (pre-harvest interval). Please review all label recommendations before application to ensure compliance.