Southern rust has been detected in southeast Kansas (Figure 1). Unlike some other corn diseases, such as gray leaf spot, southern rust does not survive in Kansas during winter months and blows in annually from more tropical regions. The earlier it arrives, the higher the risk to the Kansas corn crop. 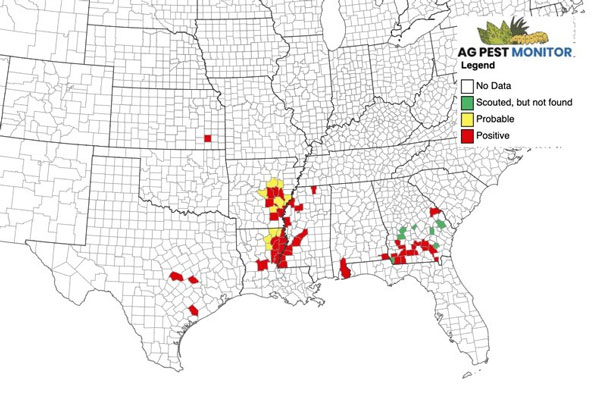 It is not recommended to apply a fungicide to control southern rust unless the disease has been observed in the canopy. Now that southern rust has been reported in southeast Kansas, it is time to be actively scouting. Once pustules are observed, the pathogen can reproduce rapidly if temperatures and humidity are high.

When deciding to spray for southern rust is important to consider hybrid susceptibility, disease incidence (how many plants are affected), and the growth stage of the crop. Infection early in the season on a susceptible hybrid, coupled with conducive weather conditions, pose the highest risk for yield loss.

Research has suggested that applications between VT to R3 have great potential for protecting corn yield, however if fungicide is applied between VT and R1 a second spray may be required to protect end of season yields. Most fungicides that are labeled for southern rust are also effective for gray leaf spot and will have residual activity for approximately three weeks after application, depending on the product. Application at dent (R5) are unlikely to provide yield benefit and the pre-harvest interval should be carefully observed. Fields that have not yet been sprayed should be monitored for disease development.

Efficacy ratings for corn fungicide management of southern rust have been compiled by a working group of corn researchers and can be found here: https://cropprotectionnetwork.org/resources/publications/fungicide-efficacy-for-control-of-corn-diseases

Southern rust produces characteristic orange pustules filed with spores, primarily on the upper side of the leaf (Figure 2). If you run your finger across the pustules, the orange spores will be visible on your hand. The Kansas State Plant Diagnostic Lab (clinic@ksu.edu) can also confirm southern rust by observing spores under the microscope. Additional information about sending in a sample can be found here: https://www.plantpath.k-state.edu/extension/diagnostic-lab/. 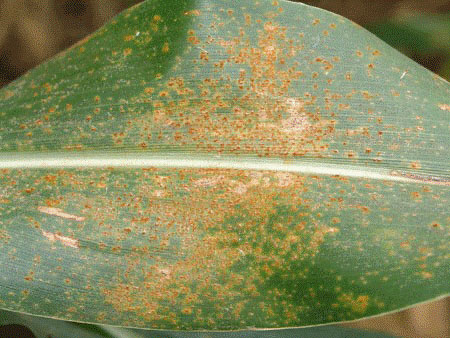