There are several leaf diseases that can infect corn in Kansas in any given year. They can all be controlled with some combination of hybrid selection, tillage management, crop rotation, planting dates, or foliar fungicides.

Recently there have been reports in eastern Kansas and Nebraska of Anthracnose leaf blight. This disease has been favored by rainfall and warm temperatures over the past few weeks. It is most likely to be a problem in fields where corn is planted into corn residue, as the fungus that causes this disease survives on residue and can be rain-splashed onto lower leaves.

Symptoms of Anthracnose leaf blight are tan, irregular-shaped lesions on the lower leaves as early as V3 to V4 (Figure 1). Lesions may reach a half-inch in length, with a red, reddish-brown, or yellow-orange border. A fungicide spray at this time would not be profitable as the lower leaves have a low contribution to yield. There is no strong connection between early-season Anthracnose leaf blight and late-season Anthracnose stalk rot. Additionally, hybrids that are susceptible to one may not be susceptible to the other. Other than the selection of hybrids with resistance, producers can also help reduce this disease by using rotation or tillage to eliminate crop debris. 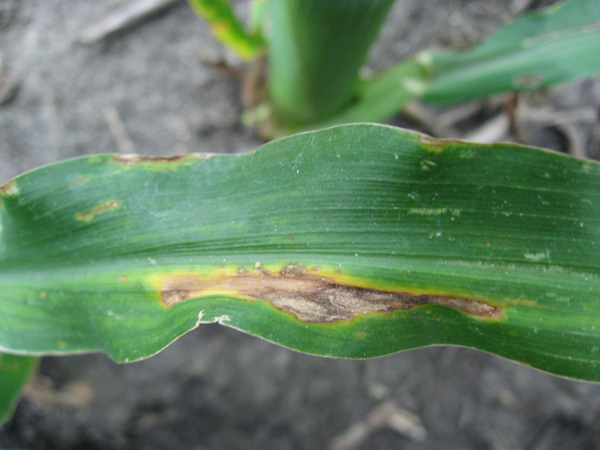 We have received some reports of common rust this season. This disease is typically less serious in Kansas than the other leaf diseases. Symptoms are small, round to elongated pustules that start out golden brown then turn darker later in the season (Figure 2). Common rust pustules commonly form on both sides of the leaf and are sparser than those of southern rust.

This disease can occur wherever corn is grown. Infection is favored by moderate temperatures (60 to 77 degrees) and high relative humidity (greater than 95 percent for at least six hours).

Common rust is easily controlled by using resistant hybrids. Fungicides are not recommended for this disease alone since common rust causes only minimal yield loss. 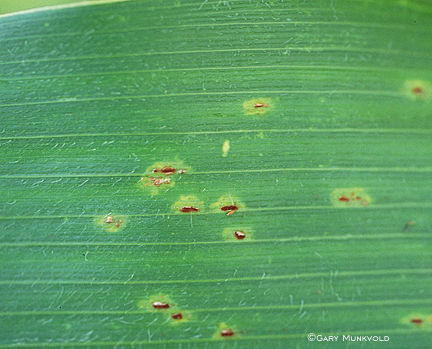 Southern rust has been reported in south eastern United States in 2020, but not yet in Kansas. Stormy weather may move southern rust into Kansas within the next few weeks. Make sure to be out scouting for southern rust and if suspected, please send images to K-State extension professionals.

Southern rust pustules look similar to common rust, but there are usually a lot more of them and they occur only on the upper leaf surfaces (Figure 3). This often gives the upper leaves a dusty appearance.

Southern rust does not overwinter in Kansas. Spores blow up from southern production areas in mid- to late-July. Warm, humid weather favors infection.

Resistant hybrids are the best choice for management. If susceptible hybrids are planted late, and disease conditions are favorable, applications of a systemic foliar fungicide may be warranted. 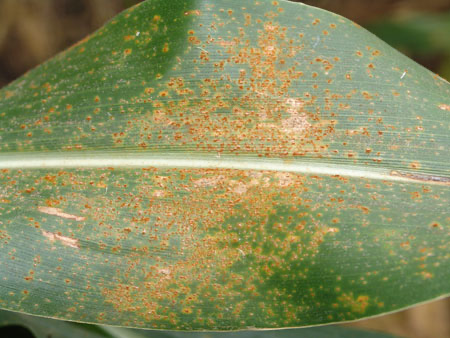 This disease is caused by a bacterial, not a fungal, infection. Symptoms are gray to light yellow stripes with wavy margins that follow the leaf veins (Figure 4). Within these lesions, dark green to black, water-soaked spots that take on the appearance of freckles usually appear and are an excellent diagnostic symptom.

This disease occurs primarily in northwest Kansas, northeast Colorado, and southwest Nebraska. It can be controlled with resistant hybrids and crop rotation. 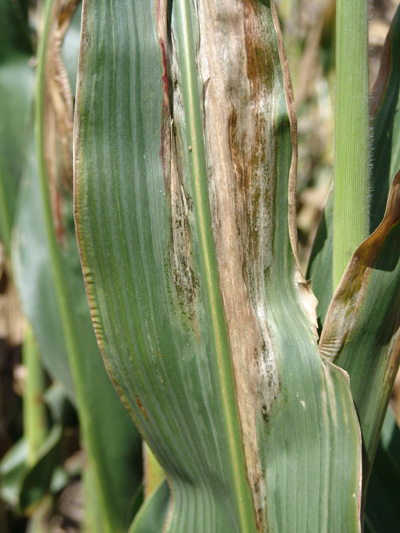 Symptoms develop on the lowest leaves first and progress upward. The first symptoms are tiny lesions surrounded by a yellow halo. These eventually elongate into pale brown or gray rectangular lesions ranging from less than an inch to two inches in size (Figure 5). The entire leaves may become blighted.

Application of a fungicide prior to full tasseling is not recommended as crop damage can occur prior to this stage of development. 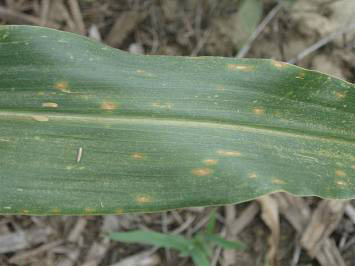 Symptoms are gray, elongated lesions 1 to 6 inches long (Figure 6). The lesions appear on the oldest leaves first, and progress upward. Lesions may become tan as they mature.

Northern corn leaf blight is most common in continuous corn where crop debris remains on the surface. Conditions that favor infection are temperatures of 65 to 80 degrees with extended periods of dew.

There are several hybrids with resistance to northern corn leaf blight. Producers can also help reduce this disease by using rotation or tillage to eliminate crop debris. 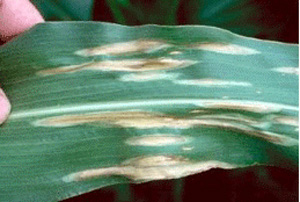 The following are leaf diseases that can occur in certain situations:

The following is a list of leaf diseases according to the time of year they typically occur in Kansas (from earliest to latest):

Next is a list of leaf diseases according to how commonly they occur in Kansas (from most common to least common):

Last is a list of corn leaf diseases in order of the potential yield loss they typically cause under moderate to severe infections (in order of most severe to least severe):