Noticeable numbers of army cutworm moths, also called Miller moths, have been observed in a couple locations in western Kansas this year. Army cutworms are late fall and early spring pests of several Kansas crops, especially wheat. These moths begin migrating into Kansas and neighboring states in the fall from their over-summering locations in the Rocky Mountains. This year, moths began showing up in western Kansas during the first week of September. In the last seven weeks, over 2000 moths have been collected in pheromone traps at a location in Finney county (Figure 1). Peak flight in the area occurred during the second week of October and has since been declining. 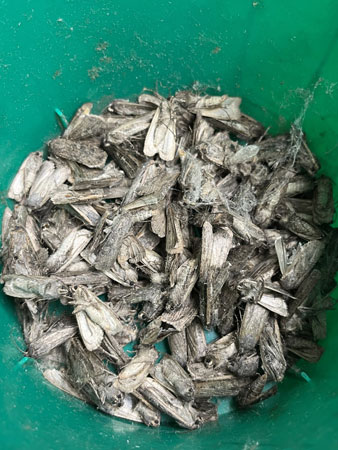 Trap counts of 800 or more moths in an area through October may indicate significant caterpillar activity the following spring. Any females still active will be laying eggs on the soil surface of freshly cultivated, weedy, or newly seeded winter wheat fields. Each female can lay up to 1000 eggs or more. After hatching, caterpillars will begin feeding and do so until cold weather forces them below ground. However, it is possible for them to resume feeding on warmer winter days. Caterpillars will complete their growth next spring and then burrow into the soil to pupate. Sexually immature adults emerge in late spring and migrate back to the mountains for summer.

Wheat fields already up and growing should be scouted for window pane damage caused by very small caterpillars. Fields should also be scouted during warm periods between February and April. Fields under stressful conditions, such as the current drought, may suffer economic damage with only 1-2 caterpillars per square foot. Typically, treatment will not be necessary until populations average 4-5 per square foot and well-tillered fields under good growing conditions can tolerate up to 10 per square foot without measurable yield loss.

In addition to wheat, alfalfa is at risk from army cutworm feeding. Damage can occur between the end of January into April. Foliar damage can impact the yield of the first cutting on established stands, but seedling alfalfa faces a higher risk; two caterpillars per square foot may warrant treatment. Treatment of older fields is warranted when four or more caterpillars are found per square foot. More information regarding control options for this pest in wheat and alfalfa can be found in the following K-State Research and Extension Insect Management Guides.