With the onset of warmer temperatures, winter canola is breaking dormancy and army cutworms are now present in fields across Kansas. Significant army cutworm pressure has been observed in fields northwest of Caldwell in Sumner County.

The economic threshold for chemical control is 1 to 2 cutworms per foot of row. Army cutworms behave nocturnally and typically spend the daylight hours belowground. When scouting, it is critical to dig in the soil around individual canola plants to find the larvae. However, it is not unusual to find army cutworm above ground when populations are high (Figure 1). The larvae are greenish-gray and often curl up into a C-shape. 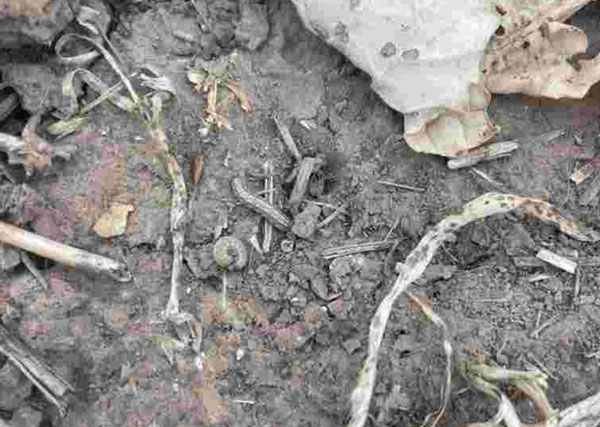 Army cutworms feed aggressively and significant damage can occur in a short period of time. Smaller plants are most susceptible. The larvae feed on the leaf tissue, leaving the plants with a fed-on appearance (Figure 2). When minor feeding is observed, you may find leaves severed from the plant and laying on the soil surface. Where infestations are high, army cutworms will remove all leaf tissue, leaving only the base of the stem (Figure 3).

Use insecticides labeled for army cutworm control (Table 1). Carefully read the label for proper application and any restrictions.