As we approach the Christmas holiday, the evergreen Eastern redcedar seemed an appropriate species to highlight in this month’s World of Weeds article.

Despite being native to the Great Plains, eastern redcedar (Juniperus virginiana) escapes from shelterbelt and ornamental plantings have resulted in widespread infestation of range and pasture that often require management (Figure 1). It is thought that the tree was originally confined to ridges and bluffs, but is now found in diverse sites, ranging from rocky uplands to swampy bottomlands. Eastern redcedars do provide food and shelter for many wild animals, but consuming leaves may be harmful to pregnant cows. 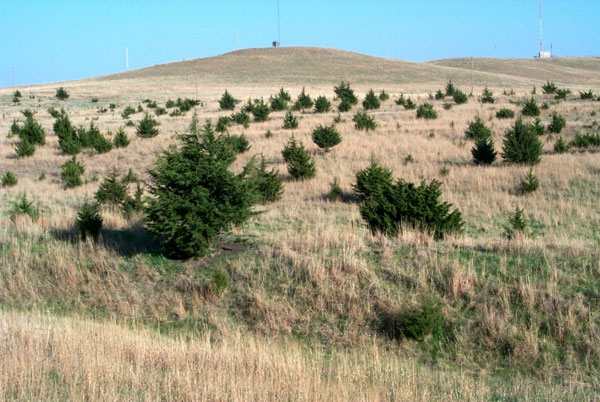 Eastern redcedar can be recognized by its opposite, evergreen leaves. Each leaf is actually a small (0.05-inch-long) triangle that pressed tightly over the margins of neighboring leaves. Younger leaves are not pressed together and are actually longer than more mature leaves. The canopy is pyramid-shaped, comprised of slender gray branches. It is a relatively slow-growing species with mature trees reaching heights of up to 65 feet. Bark is reddish brown and shreds into long, narrow strips.

Eastern redcedar is a dioecious species, meaning some plants only produce male reproductive structures while others only female structures (Figure 2). Eastern redcedar ‘berries’ are actually female cones. Cones are small (1/10 to 1/3-inch diameter), blue to purple colored spheres covered with a white wax. Each cone contains one to three small, egg-shaped seeds. Pollen cones are found at the end of branches.

Eastern redcedar can be managed with prescribed fire, especially trees that are less than 3 feet tall. For larger trees, cutting below the lowest branches is effective because eastern redcedar does not resprout. Grazon P+D, Surmount, and Tordon 22K are among the more effective herbicides; however, control by broadcast applications decreases rapidly as trees height increases. Soil-applied herbicides that can control eastern redcedar include Velpar L and Prononone Power Pellets.  In addition, grazing management that promotes a health grass sward is important to preventing the spread of eastern redcedar.