The official start of winter is still over a month away, but Kansas has already experienced winter-like weather this fall. This article discusses some of the factors to consider when evaluating the outlook for winter survival of wheat.

Cold acclimation of the crop and maintenance of winter hardiness

During the fall, winter wheat seedlings spend approximately the first month developing their first leaves, the crown, and a secondary root system. All the while, the seedlings are building and storing the energy needed to go through the cold acclimation process and survive the winter. Normally, seedlings will need a minimum of 4-5 leaves and one or two tillers to build up enough stored energy reserves to survive the winter. Ideally, the wheat plant would have 3 to 5 tillers prior to the onset of the winter. This might be a challenge this year in fields that, although planted on time, did not receive enough precipitation to emerge until recently and thus will have less time to produce leaves and tillers. Seedlings will have a better chance of winter survival if their crowns are well developed, in firm soil, about one inch below the soil surface.

Winter hardiness or cold tolerance is a physiological process triggered by gradually cooling temperatures in the fall. During the process of cold acclimation, certain genes within winter wheat begin to initiate the production of “anti-freeze” type substances to protect the cell membranes. The process of cold acclimation within a sufficiently developed wheat seedling begins when soil temperatures at crown depth fall below about 50 oF (Figure 1). 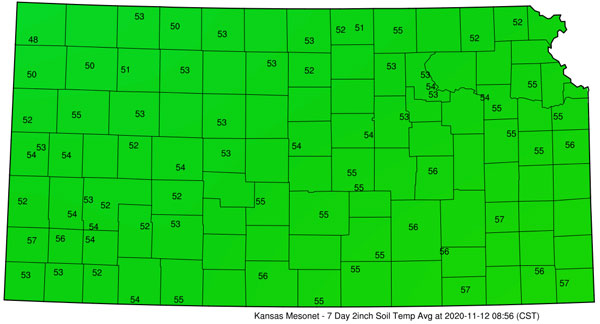 Figure 1. Average 2-inch soil temperature during the week of November 6 – 12, 2020. Temperatures for the majority of the state were above the 50 °F threshold needed to initiate the process of cold acclimation in winter wheat. Data and map by Kansas Mesonet.

Below 50 oF, there is an inverse relationship between crown temperatures and cold acclimation, meaning that plants will acclimate twice as fast when crown temperatures are 32 oF as compared to 40 oF. Photoperiod also plays a role in the process of cold hardening, with shorter days and longer nights helping initiate the process. Winter survival depends on the crown remaining alive and the substances that produce cold acclimation are most needed within the crown.

Even during the depths of winter, winter wheat is still respiring and roots may be growing – as long as the ground is not frozen. It is not unusual to find a much more developed crown root system in early February than existed in early December. It is also not unusual to see some green leaves intermingled with straw-colored or pale leaves in the winter (Figure 2). The fact that some of the leaves have some green color does not mean the wheat is not cold tolerant. 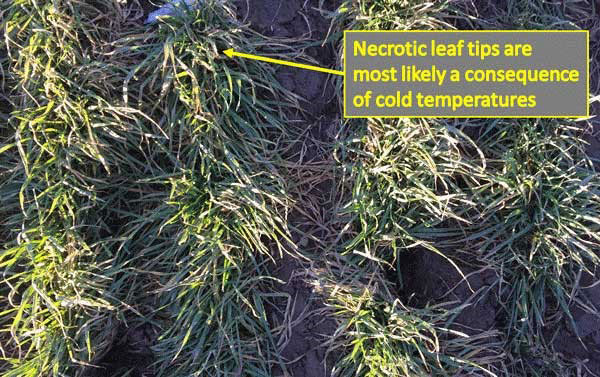 Figure 2. Wheat plants starting to show straw-colored or pale leaf tips as a consequence of cold temperatures near Healy. Brown, dried leaves do not necessarily indicate winter injury. The only way to assess the plant’s condition following winter is to examine the crown for winterkill. Photo by Romulo Lollato, K-State Research and Extension.

Once winter wheat has reached the level of full cold hardiness, it will remain cold hardy as long as crown temperatures remain below about 32 oF – assuming the plants had a good supply of energy going into the winter.

If soil temperatures at the crown depth rise to 50 oF or more for a prolonged period, there will be a gradual loss of cold hardiness, even in the middle of winter. The warmer the crown temperature during the winter, the faster the plants will start losing their maximum level of cold hardiness. Winter wheat can re-harden during the winter if it loses its full level of winter hardiness, but will not regain its maximum level of winter hardiness.

Good top growth of wheat doesn’t necessarily indicate good root development. Poor root development is a concern where conditions have been dry. Where wheat plants have a good crown root system and two or more tillers, they will tolerate the cold better. If plants are poorly developed going into winter, with very few secondary roots and no tillers, they will be more susceptible to winterkill or desiccation, especially when soils remain dry. Poor development of secondary roots may not be readily apparent unless the plants are pulled up and examined (Figure 3). If secondary roots are poorly developed, it may be due to dry soils, poor seed-to-soil contact, very low pH, insect damage, or other causes. 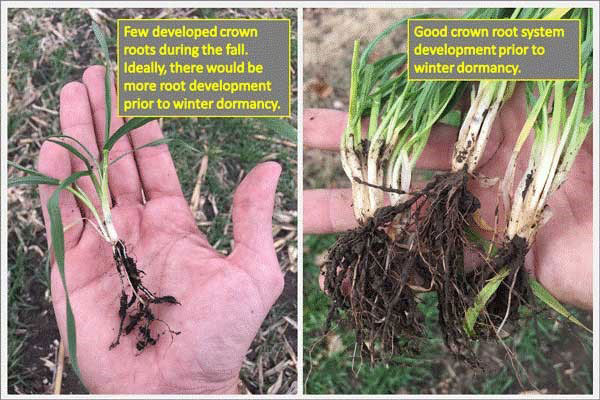 Figure 3. Differences in wheat development prior to winter dormancy. Both examples shown above should be able to make it through the winter, although the more-developed root system in the photo to the right will be able to provide water and nutrients with less limitations to the plant during the winter. Photos by Romulo Lollato, K-State Research and Extension.

Soil temperatures at the crown level

Soil temperatures at crown level depend on snow cover, moisture levels in the soil, and seedbed conditions. Winterkill is possible if soil temperatures at the crown level (about one-inch-deep if the wheat was planted at the correct depth) fall into the single digits. If there is at least an inch of snow on the ground, the wheat will be insulated and protected, and soil temperatures will usually remain above the critical level. In addition, if the soil has good moisture, it is possible that soil temperatures at the crown level will not reach the critical level even in the absence of snow cover. However, if the soil is dry –as it is this year in a large portion of north central and northwest Kansas (Figure 4, upper panel) and there is no snow cover, there may be the potential for winterkill, especially on exposed slopes or terrace tops, depending on the condition of the plants. Most of the wheat growing region in the state has not received substantial precipitation for over 30 days, and the topsoil is possibly dry through central and western Kansas (Figure 4, lower panel). Dry soils and loose seedbeds warm up and cool down much faster than moist or firm soils, contributing to winter injury. 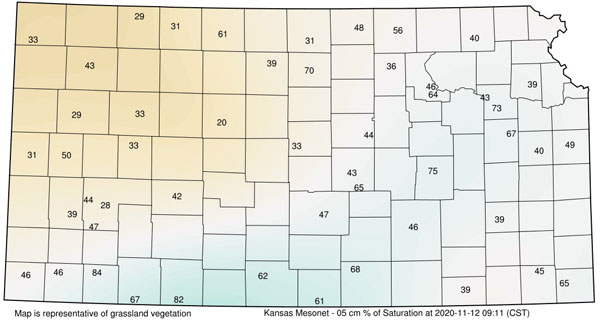 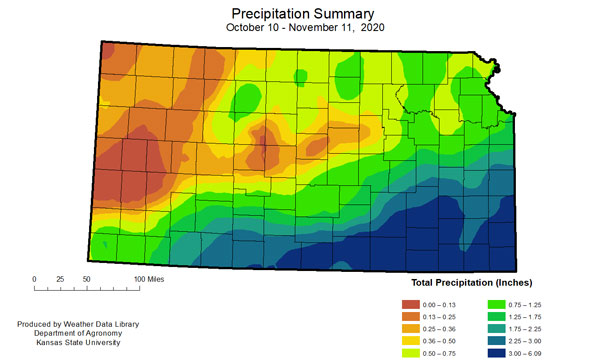 Figure 4. Percent soil moisture in the surface 2” as of Nov. 12, 2020 (upper panel), and cumulative precipitation from October 10 – November 11, 2020 (lower panel). While southeastern Kansas received as much as 6.09 inches, the majority of central and western Kansas, where wheat is mostly grown, received less than 0.50 inches. Dry topsoil might result in greater exposure to winterkill, especially if the canopy is not well developed. Map and data from Kansas Weather Data Library.

Is the crown well protected by soil?

If wheat is planted at the correct depth, about 1.5 to 2 inches deep, and is in good contact with the soil, the crown should be about one inch below the soil surface and well protected from the effects of cold temperatures. If the wheat seed was planted too shallow, then the crown will have developed too close to the soil surface and will be more susceptible to winterkill. Also, if the seed was planted into loose soil or into heavy surface residue, the crown could be more exposed and susceptible to cold temperatures and desiccation.

Is there any insect or disease damage to the plants?

Plants may die during the winter, not from winterkill, but from the direct effects of a fall infestation of Hessian fly. Many people are familiar with the lodging that Hessian fly can cause to wheat in the spring, but fewer recognize the damage that can be caused by fall infestations of Hessian fly. Wheat infested in the fall often remains green until the winter when the infested tillers gradually die. Depending on the stage of wheat when the larvae begin their feeding, individual tillers or whole plants can die. If the infestation occurs before multiple tillers are well established, then whole plants can die. If the plants have multiple tillers before the plants are infested, then often only individual tillers that are infested by the fly larvae will die.

If you have bare patches now, it is a good idea to keep an eye on them and if they slowly expand over the winter, get out and check in the soil around the base of the plants to see if there are small worms curled up about an inch or two below the surface, especially in loose soils. A spot application of a registered insecticide on a warm (above 55 oF) winter afternoon will do a pretty good job of controlling the worms and allow the plants to come back in the spring as these worms only feed on the above-ground leaf tissue, and not on the roots or crown.

Symptoms of winterkill will be more apparent when the weather warms up and plants start to green up early spring. If plants are killed outright by cold temperatures, they will not green up next spring. But if they are only damaged, it might take them a while to die. In some cases, damaged plants will green up and then slowly go “backwards” and eventually die. This happens because although there may be enough nutrients in the crown to allow the plants to green up, the winter injury causes vascular damage so that remaining nutrients cannot move, or root rot diseases move in and kill the plants. This slow death is probably the most common result of winter injury on wheat.

Direct cold injury is not the only source of winter injury. Under dry soil conditions, wheat plants may suffer from desiccation. This can kill or weaken plants, and is actually a more common problem than direct cold injury.

Ideally wheat plants should have at least 1-2 tillers and 3-5 leaves, as well as a good crown root system development, when going into the winter. However, many Kansas wheat fields emerged relatively late during the 2020-21 growing season due to dry soil conditions, and has faced below-average temperatures, which slowed down crop development. A fall with open field conditions, gradually falling soil temperatures, and little snow cover until freeze-up, will contribute to winter hardiness development by the wheat crop. During the winter, moist and firm soil, as well as at least an inch snow cover, will help buffer and insulate crown temperatures and increase the chances of winter survival.