The latest USDA-National Agricultural Statistics Service Crop Progress and Condition report for Kansas classified near 56% of the corn crop as ‘good’ or ‘excellent’ condition. Overall, 28% of Kansas’ corn is mature with 4% harvested.

The weather conditions experienced from late July to end of August are critical for corn as related to the grain-filling rate and determining final grain weight. Temperature and precipitation have split across the state, with cooler-than-normal conditions in the south central and southeast, while warmer conditions have dominated in the west (Figure 1a). Most of the state had below-normal precipitation, despite isolated pockets of heaver precipitation (Figure 1b).

In recent years, a common question from producers relates to the dry down rate for corn when approaching the end of the season. Based on previous information, the average dry down rate depends on the weather, primarily temperature and moisture conditions – but it might range from 1% in late August to less than 0.5% per day in October.

The weather outlook for September calls for an increased chance of cooler-than-normal temperatures with chances for below-normal precipitation for all but the southeastern corner of the state.

Grain water loss occurs at different rates but with two distinct phases: 1) before “black layer” or maturity (Figure 2), and 2) after black layer. For the first phase, Table 1 contains information on changes in grain moisture from dent until maturity of the corn. 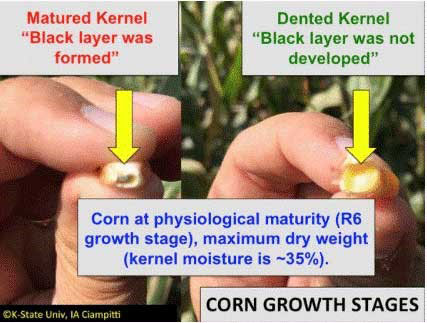 To properly address questions from many producers on the rate of dry down, a study is underway to investigate the grain dry down rate from the moment of “black layer” until commercial harvest grain moisture was reached. For the conditions experienced in 2017 and 2018 seasons (from late August until mid-September), the overall dry down rate was around 1% per day (from 36-35% to 15-17% grain moisture) – taking an overall period between 18-to-21 days (Figure 3). 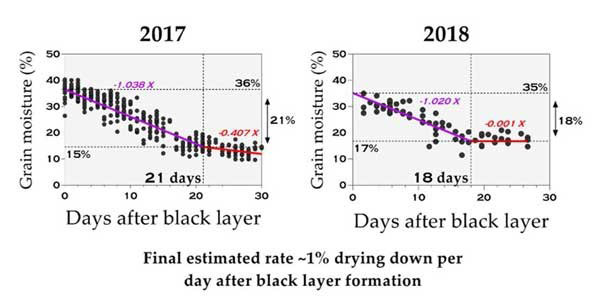 Figure 3. Grain moisture dry down (purple line) across three hybrids and N rates near Manhattan, KS during 2017 and 2018. Horizontal dashed lines marked the grain moisture at black layer formation and grain moisture around harvest time for each year*. Graph prepared by Ignacio Ciampitti and Javier Fernandez, K-State Research and Extension.

The dry down process can be delayed by:

It is expected that the dry down rate will decrease to <0.5% per day for late-planted corn entering reproductive stages later in the growing season. Expect a similar decrease for corn that was exposed to late-season stress conditions (e.g., drought, heat). Under these conditions, maturity may be reached with high grain water content and the last stages after black layer formation could face lower temperatures and higher humidity. These main factors should be considered when the time comes to schedule corn harvest. You can track temperature and humidity levels on the Kansas Mesonet web site at http://mesonet.k-state.edu/weather/historical/ by selecting the station and time period of interest.