Every year is different, but 2019 is turning out to be more different than most. Stages of corn development around the state range from tasseling along the Oklahoma border to very recently emerged near the Nebraska border. There are reports of gray leaf spot lesions on corn as early as the V3-V4 stages. Additionally, bacterial leaf streak, a somewhat “look alike” disease is becoming active. Scouting is highly encouraged as the corn begins to approach the VT stage.

Years of fungicide application research clearly demonstrates that the single best time to apply a fungicide to corn for gray leaf spot control is from VT to R1. A single application at V7 – V8 will not hold up against late-season pressure. Those who choose to put a fungicide down with their last herbicide treatment will most likely have to apply second cover at VT – R1 if there is any gray leaf spot pressure at all. A VT – R1 application may also provide some suppression of southern rust, should it arrive early enough to cause yield loss.

University fungicide trials also reveal that final disease severity plays a critical role in the magnitude and consistency of yield response to a foliar fungicide application. The tricky part is being able to predict before the VT to R1 stages what the disease pressure will be several weeks later. To make such a prediction, you need to consider “disease risk factors” and to scout for disease.

Susceptibility level of corn hybrid. Seed companies typically provide information on the susceptibility of their hybrids to gray leaf spot in their catalogs. In general, hybrids that are more susceptible to fungal foliar diseases will have a greater response to a foliar fungicide (if disease pressure is high enough).

Previous crop. Because gray leaf spot survives in corn residue, the risk of disease increases when corn is planted back into a field that was in corn the previous year.

Weather. Rainy and/or humid weather generally is most favorable to gray leaf spot. In growing seasons when these conditions prevail, the risk for disease development increases.

Field history. Some field locations may have a history of high foliar disease severity. Fields in river bottoms or low areas or surrounded by trees may be more prone to having gray leaf spot.

Begin scouting for gray leaf spot in corn about two weeks before expected tassel emergence. Gray leaf spot is characterized by rectangular lesions that are 1-2 inches in length and cover the entire area between the leaf veins. Early lesions are small, necrotic spots with yellow halos that gradually expand to full-sized lesions. Lesions are usually tan in color but may turn gray during foggy or rainy conditions. The key diagnostic feature is that the lesions are usually very rectangular in shape. 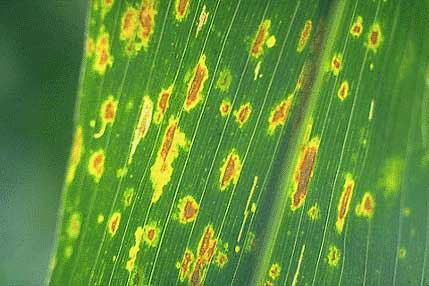 According to the data from Illinois corn fungicide trials, if at least 5 percent of the ear leaf area is affected by disease at the end of the season, a foliar fungicide applied between VT and R1 would likely have been beneficial. Using the disease risk factors and scouting observations collected just before tassel emergence will help you predict how severe disease may be several weeks after the VT to R1 stages, and help you decide whether to apply a foliar fungicide.

If no disease is present or pressure is low, I recommend holding off on the R1 application since efficacy will begin to wane in three to four weeks, just as late season pressure may begin to develop. Data exists that would suggest that if pressure begins to develop later, an R2 application can be economical and will provide protection later into the grain fill period. This later application could also protect against any late-season southern rust pressure.

Bacterial streak, identified as a new corn disease in the U.S. in 2016, is now active in most of western Kansas. While yield loss potential for this disease remains unknown, we do know that it can be misidentified as gray leaf spot, resulting in unwarranted fungicide applications. Keep in mind that gray leaf spot typically has very sharp edges defined by the leaf veins, whereas bacterial streak will have a wavy edge that can cross the leaf vein (Figure 2). Also, when backlit with light, gray leaf spot lesions will have an opaque appearance while bacterial streak lesions are more translucent (Figure 3). 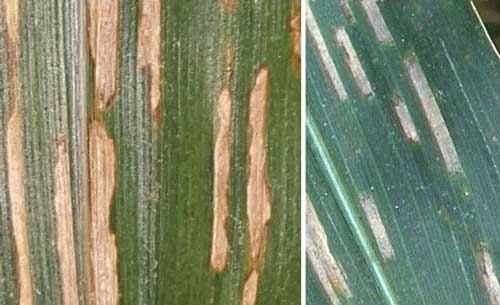 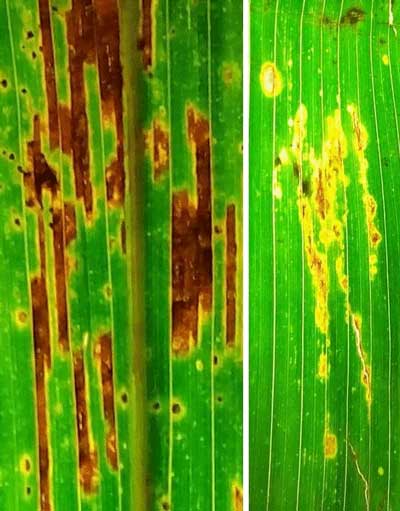