Symptoms of a troublesome disease known as Fusarium head blight are appearing in some wheat fields in central and eastern Kansas this year. The wheat crop in many parts of the central and eastern regions has already been hit hard by excessive rain and leaf diseases that hastened the maturity and cut valuable time from the grain-filling period of the crop. As the crop matures, many growers are reporting symptoms of Fusarium head blight.

Fusarium head blight (head scab) causes large tan lesions that encompass large portions of the wheat head (Figure 1). The symptoms of the disease are most evident during the late milk and early dough stages of kernel development. The symptoms are quickly masked by the maturation of the wheat crop and many growers may not realize the full extent of the damage until harvest and the Fusarium damaged kernels are visible in the grain. At this stage, the disease kernels will have a white, chalky appearance (Figure 1). Some kernels may also have a pink discoloration. The diseased grain may also contain mycotoxins that can negatively impact the health of animals and humans. Deoxynivalenol (DON) is the most common mycotoxin associated with Fusarium damaged wheat. This mycotoxin is also called “vomitoxin” by some segments of the wheat industry. 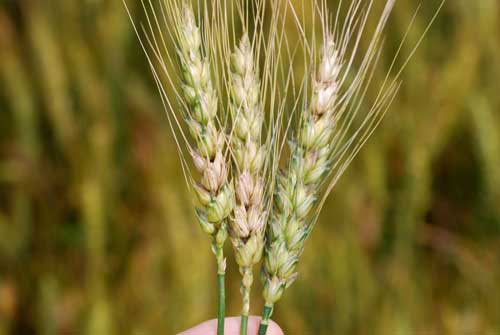 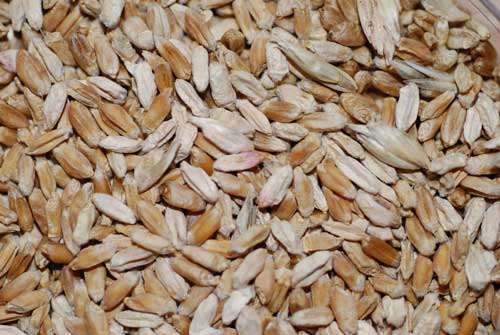 Figure 1. Wheat with symptoms of Fusarium head blight. Symptoms of the disease are most evident at the milk or dough stages of kernel development (upper photo) and are quickly masked by natural maturation of the crop. Gain damaged by the disease often contains white, chalky kernels (lower photo). Photo by Erick DeWolf, K-State Research and Extension.

The full extent of distribution and severity of Fusarium head blight is not clear, but it is very likely that many growers will experience elevated levels of the disease this year. Unfortunately, there is nothing that can be done to suppress development of the disease at this time. There are no fungicides labeled for application this close to harvest, and such treatments would have no effect on the disease. At this point, we are trying to make the best out a potentially difficult and frustrating situation.

Growers can begin preparing by setting harvest priorities on fields with lowest levels of Fusarium head blight. Where the crop is still at milk or dough stages, it may be possible to note disease levels before maturity. After maturity, we can use information about genetic resistance to help guide harvest priorities. Although all wheat varieties are vulnerable to the disease, varieties with moderate levels of genetic resistance (Everest, WB4269 and Zenda) are likely to have lower levels of disease than those with susceptible reactions to the disease. Varieties with intermediate reactions to Fusarium head blight (Bob Dole or SY Benefit) may also have less disease. Harvesting fields with the lowest disease levels can help prevent additional weathering of the crop and further degradation of grain test weight and quality.

Adjust harvest equipment to remove Fusarium damaged kernels. The kernels damaged by Fusarium head blight are often smaller and less dense than healthy kernels making mechanical separation of the affected grain possible. In many cases, it is possible to improve test weight and grain quality by adjusting the air flow on the combine to remove the most damaged kernels during harvest.

Plan to separate loads of grain that are damaged by the disease. Grain elevators and growers with on-farm storage can help prepare for harvest by planning to segregate loads of grain with differing disease levels. Where possible, avoid mixing healthy grain with loads of grain with higher disease levels. Historically, the largest price discounts for Fusarium damaged grain occur during harvest, placing grain into storage temporarily can provide time for growers to document disease levels and the grain marketing infrastructure to adjust to accommodate the less desirable grain. In extreme cases, it may be possible to use seed cleaning equipment to remove the diseased kernels and improve the marketability of the crop.