Prickly lettuce (Lactuca serriola), also called wild lettuce, can be found in some wheat fields across Kansas. Similar to horseweed and mustard species, fall and early spring are good times to look for prickly lettuce, as it will be best controlled at those times.

Prickly lettuce is winter annual or biennial plant that is a member of the Asteraceae (sunflower) family. Prickly lettuce originated in the Mediterranean region. It is thought to have been introduced to the United States in the late 1800s as a seed containment and has become wide-spread throughout North America. It is commonly found in many sites across the Great Plains, including roadsides, pastures, and cultivated fields. The adoption of no-till and reduced tillage farming practices increased the occurrence of prickly lettuce in crops.

Prickly lettuce seedlings have oblong cotyledons with a base that tapers into a short stalk and slightly intended tips. Seedlings can emerge when the temperature is as low as 40 F and as high as 95˚ F. The plant initially forms a basal rosette. True leaves are two to ten inches long, egg- to club-shaped with toothed, wavy, lobed, or spiny edges. The upper leaf surface is smooth, but stiff bristles are found on the midvein the lower leaf surface (Figure 1). These bristles are a key feature that distinguish a prickly lettuce rosette from dandelion. Another difference is that the lobes on dandelion leaves point inwards toward the center of the rosette, unlike the lobes on prickly lettuce leaves. 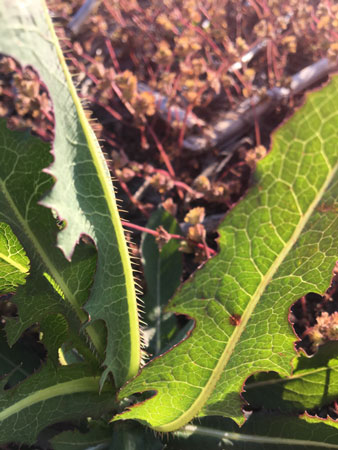 Figure 1. Example of spines on underside of prickly lettuce leaf on the lower midvein. Photo by Anita Dille, K-State Department of Agronomy.

Prickly lettuce will bolt prior to flowering (Figure 2), producing an upright stem that can reach up to 6-1/2 feet in height. Leaves on the stem are alternate, clasping, and usually lobed. They also have the characteristic bristles along the midvein on the lower leaf surface. The lower portion of the stem may be smooth or have bristly hairs. Prickly lettuce stems are hollow and contain a milky sap. 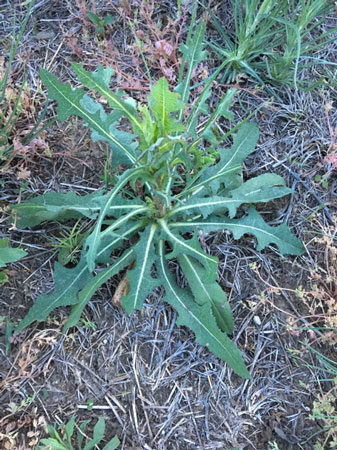 Prickly lettuce seeds are approximately 1/10 of an inch in length with barbed ribs and are attached to a stalk with a tuft of fine hairs that facilitate wind dispersal. Prickly lettuce can produce up to 46,000 seeds per plant. Seeds can germinate immediately or survive up to three years in soil.

Prickly lettuce is drought tolerant and competes with crops for water. Recent research from Ontario suggests that densities up to about 200 plants per square foot did not reduce wheat yield, but did reduce soybean yields up to 80%. In the same experiment, prickly lettuce produced 2,200 to 67,000 seeds per plant in soybeans but up to 200,000 seeds in field borders.

Prickly lettuce populations resistant to chlorosulfuron, mestsulfuron, triasulfuron, 2,4-D, dicamaba, and MCPA have been identified in the Pacific Northwest region of the United States.

For more information, see the “2022 Chemical Weed Control for Field Crops, Pastures, and Noncropland” guide available online at https://bookstore.ksre.ksu.edu/pubs/SRP1169.pdf or check with your local K-State Research and Extension office for a paper copy.