Wheat planting is just a month or so away in parts of Kansas, so now is the time to get your soil sampling done to have good information on which to base your fertilizer inputs. This is particularly important with higher fertilizer prices contributing to very tight margins for wheat.

Which nutrients should be tested?

The most important tests and nutrients to focus on this year depends in part on where you are located, the choices you make when applying N, and your tillage system. The nutrients for which wheat is most likely to show responses statewide are nitrogen (N) and phosphorus (P). Wheat is the most P-responsive crop we grow in Kansas, and while P removal with wheat may be less than with corn or soybeans, the relative yield response is often the highest. Therefore, knowledge of P soil test levels and fertilizer needs will be valuable. In addition, low soil pH is becoming a problem, especially fields with a history of high rates of N application and relatively low cation exchange capacity. 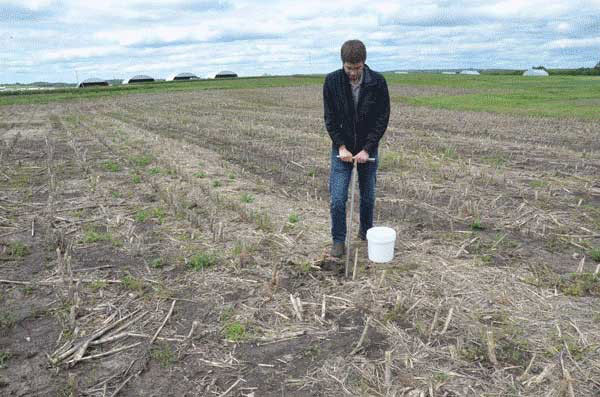 In addition to the “Big 3” (pH, N, and P), potassium (K) deficiency in wheat can also be found in some areas of southeast and south central Kansas. Wheat is generally less prone to K deficiency than many of the rotation crops commonly grown, such as corn, soybeans or grain sorghum. Generally, the focus of a K fertilization program is with the rotation crops, and meeting the higher K needs of corn and soybeans minimizes the chance of a K deficiency in wheat.

A standard 0-6 inch surface sample is normally used to test for pH and the non-mobile nutrients such as P and K. Phosphorus and K are buffered processes in our Kansas soils. This simply means that the soil contains significant quantities of these nutrients, and the soil tests we commonly use provide an index value of the amounts available to the plant, not a true quantitative measure of the amounts present. In the case of P, most Kansas soils require about 18 pounds of P2O5 to increase 1 ppm in soil test P; for K is around 8 pounds K2O to increase 1 ppm K soil test.

In addition to requesting the standard soil tests of pH, P, and K from the 0-6 inch surface sample, producers might also want to monitor soil organic matter levels and micronutrients such as zinc (Zn). Zinc is not a nutrient commonly found deficient in wheat production. However, it is important for corn and grain sorghum. Thus including it in your sample package would be helpful for planning for these rotation crops.

Soil organic matter (SOM) is an important source of nutrients such as N and sulfur (S). When calculating the fertilizer needs for both these nutrients, SOM is taken into consideration. For wheat production, 10 pounds of available N and 2.5 pounds of S is credited for every 1% SOM in the soil.

In addition to pH, SOM, P, K, and Zn -- all of which are non-mobile in soils and accumulate in the surface – the mobile nutrients N, S, and chloride can provide significant yield responses when deficient in soils. Since all three of these nutrients are mobile in soils and tend to accumulate in the subsoil, we strongly recommend the use of a 24-inch profile soil sample prior to growing wheat, corn, or grain sorghum.

Nitrogen is a nutrient likely to provide yield response statewide. One common misconception is that the accumulation of N in the soil profile only occurs in the drier, western half of the state. However, with our dry winters, N can accumulate in the soil statewide. Rainfall tends to peak in Kansas in June and July, with a rapid decrease in monthly precipitation in the fall. Rainfall totals are generally lowest in December and January. Wheat takes up the majority of its N prior to flowering. In southeast Kansas that is in April, and in north central Kansas it is in early May most years.

In many years, especially following dry summers like this year, significant amounts of N can be present in soils at wheat planting. On the other hand, after good yields, the residual N levels may be lower than the commonly used “default” value, and N fertilizer rates would need to be adjusted accordingly. Don’t miss the companion article in this issue on the correlation of the amount of nitrate in the soil profile and wheat yield.

Sulfur deficiency is increasing across the state in wheat production also. There are two primary causes: the reduction in sulfur deposition from the atmosphere seen over the past 2-3 decades, and the reduction in S content in many P fertilizers. While not as soluble as nitrate, S is also a relatively mobile nutrient which accumulates in the subsoil. The S profile soil test is a good way to determine S needs.

Chloride (Cl) is the third essential mobile element to be considered for wheat production with profile soil testing. Chloride deficiency is normally found in the eastern half of the state on soils that do not have a history of potash (KCl) application. In general, this includes many areas in eastern Kansas, north of the Kansas River, and the central corridor of wheat production. Chloride deficiency is associated with grass crops, wheat, corn, and grain sorghum, and is correlated with the plants ability to resist plant disease. Again, the profile soil test for chloride is well calibrated in Kansas and should be considered.

In summary, wheat producers in Kansas should consider soil testing to help in making accurate fertilizer decisions. Accurate decisions are especially important during years with low grain prices and tight budgets. Furthermore, after variable conditions and yield levels across the state, fertilizer needs may require adjustments based on soil test. Wheat producers specifically, should use surface 0-6 inch samples to determine the need for lime on low pH soils, P, K, Zn, and soil organic matter. They also should be using 24-inch profile soil tests for N, S, and Cl. Now is the time to get those samples taken, to ensure there will be enough time to consider those test results when planning your fall fertilizer programs.

For more information on soil sampling and submitting samples to the K-State Soil Testing Laboratory, visit their website at http://www.agronomy.k-state.edu/services/soiltesting/.