Alfalfa weevil and certain aphid populations are now active in Kansas. The following is an update as of April 21.

Alfalfa weevil larvae continue to be very active. Larvae started hatching about 3 weeks ago, and are still doing so (Figure 1), thus the disparity in size in this picture. Many alfalfa fields have been treated in the last 2 weeks but larvae continue to emerge from eggs. Thus monitoring should continue, but only after the reentry interval (REI) for the insecticide used on that field. Most insecticides used for alfalfa weevil control will also kill any aphids present, along with the beneficials. So, monitoring for aphids should continue also. 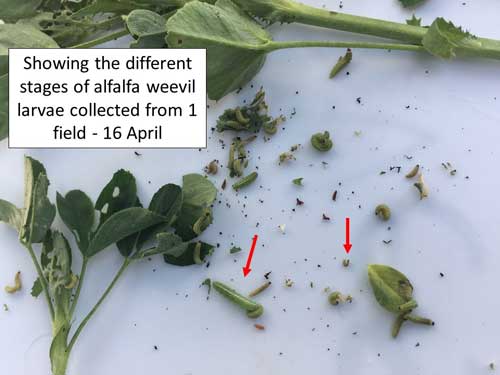 To sample using the “shake bucket” method, randomly select individual alfalfa stems and quickly and vigorously shake them into a small white bucket. Then, count the number of dislodged larvae in the bucket and divide by the number of stems to get the infestation level. For example, 15 larvae from 10 stems = an average of 1.5 larvae/stem. Do this in several areas throughout each field to get a good indication of the alfalfa weevil infestation level and the stage of development of the weevil. One of the problems with the shake bucket method is that some stems have several larvae/stem while others have none (yet). Thus, the infestation level may appear to be higher than the actual infestation.

However, in north central Kansas, with as many larvae as there are already (with more to come probably) and as much damage as we are starting to see in spots (Figure 2), it may be prudent to treat fields as soon as possible.

Producers should treat for alfalfa weevils once the weevils are found on at least 50% of the alfalfa plants. 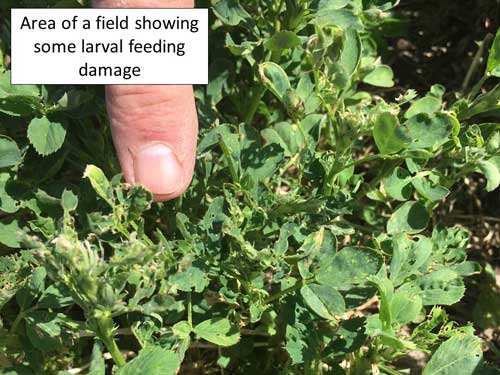 For information on insecticides registered for use for alfalfa weevil control, please see the K-State Alfalfa Insect Management Guide: https://www.bookstore.ksre.ksu.edu/pubs/mf809.pdf

Cowpea and pea aphids have also been found in some alfalfa fields. These aphids are not normally found at current levels until June or July, usually with the second or third alfalfa cutting.

Alfalfa is a good host for beneficial insects, such as lady beetles. They will feed on cowpea aphids and pea aphids. Because of that, I have a hard time recommending treating for cowpea aphids or pea aphids.

Many producers worry about the honeydew on alfalfa plants that cowpea aphids produce. There is no specific percentage that creates the need for the aphids to be treated, however.

If a producer decides to treat for aphids, they may want to consider one of the new insecticides that are labeled for alfalfa aphids. If producers leave them untreated, beneficial insects will find them and start helping to control them to some extent.

Spraying for alfalfa weevils will also kill the aphid populations.