Producers are likely familiar with timing of limited irrigation to maximize yield in grain crops, e.g. immediately prior to tassel/silk in corn and boot stage in grain sorghum. These strategies work toward maximizing the most variable yield component and the one typically most sensitive to stress, kernels/ear row in corn and kernels/head in grain sorghum. For cotton, while lint quality and lint/boll can vary due to management, bolls/acre is the most important yield component in cotton production (Figure 1). 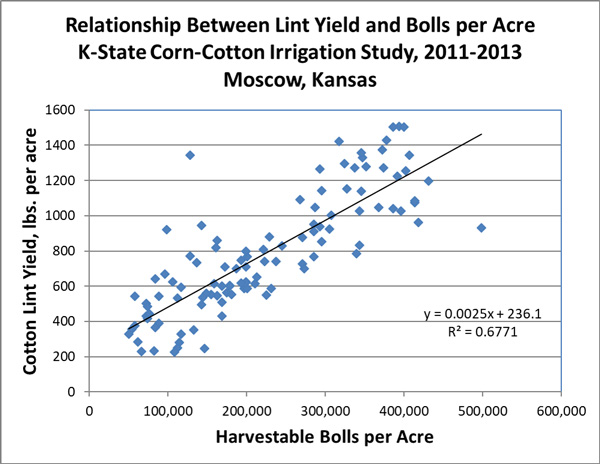 Assuming good stands are established, early season conditions in Kansas typically are conducive to initiating a large number of squares. However, as the season progresses and stress becomes more prevalent, the plant response is to abort squares, thus reducing the plant’s maximum yield potential.

K-State research was conducted in Stevens County in southwest Kansas from 2011 through 2015 to investigate the effects of irrigation timing on cotton lint yield and also corn yield when the two crops are grown with a shared water supply. Cotton irrigation treatments include a range of full-season irrigation scenarios where an inch of water was applied every 5, 7, or 10 days throughout the growing season. This simulates full-season irrigation with a standard quarter-section pivot under the constraint of varying well capacities of 500, 350, and 250 GPM. Additional treatments included a dryland treatment (one irrigation to ensure a good stand) and the application of water at selected time periods to maintain the key yield component of bolls per acre.

When looking at results across the entire 5 years (Figure 2), under full season irrigation there was no significant yield advantage to irrigating every 5 days as compared to every 7 days, although both of these strategies modestly increased yields compared to irrigation every 10 days. The largest gain in yield per unit of irrigation applied occurred with the targeted timings. When averaged across years, lint yields increased an average of 252 lbs per acre, or 82% over dryland yields with the application of 1” of water at match-head square (MHS). An additional application of one inch at bloom did not further increase yields.  The response to this targeted application of water at MHS varied in magnitude, an increase of 443 lbs per acre compared to dryland was observed in 2013, but an increase of only 34 lbs per acre was seen in 2015, a relatively wet year in which response to all irrigation treatments was reduced. 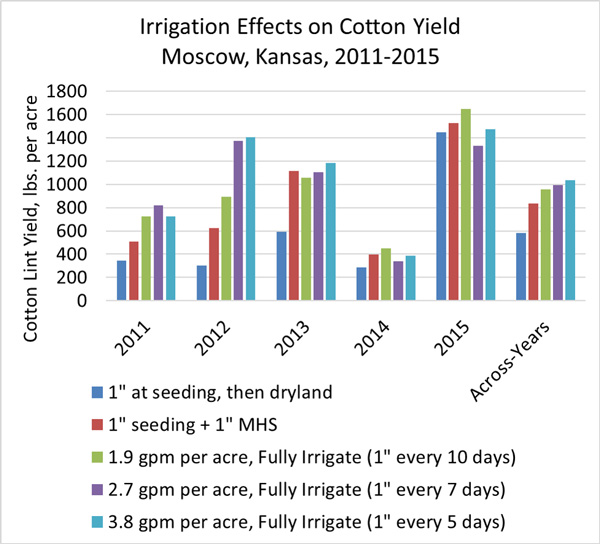 Producers can maximize cotton yields by ensuring irrigation occurs at or immediately prior to MHS to maintain the bolls per acre yield component. Data from this study indicates that a very high level of water use efficiency can be attained by targeting a relatively small amounts of irrigation at this critical time period.