The following report is taken from the K-State Extension Entomology Newsletter released on September 26, 2019.

Most soybeans in north central Kansas, even double-cropped fields, are getting to the stage where the pods are hardened enough to protect the beans inside (note the pod-feeding scar by bean leaf beetles and an adult bean leaf beetle (Figure 1, left). Woollybear caterpillars (Figure 1, right) are becoming more noticeable. As the soybean leaves start to senesce, the caterpillars are getting larger and thus more visible, and as they move to the ground, looking for overwintering sites.

Most sorghum throughout north central Kansas is past the soft dough stage, thus not susceptible to “headworms.”  However, a few late-planted fields, just coming into the “boot” stage, have sporadic small colonies of sugarcane aphids (Figure 2).  However, there seems to be significant numbers of beneficials, but these late-developing fields should still be monitored as these populations can “explode” quite quickly. 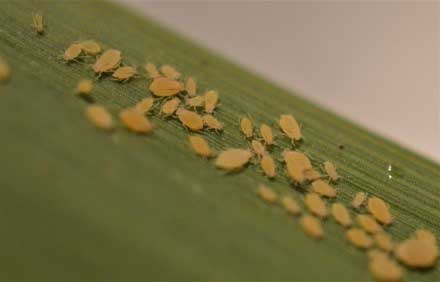 Some reports have been received recently, mainly from south eastern/south central Kansas, about “worms” feeding on early-planted wheat. First, it is usually better to plant wheat as late as possible to help avoid all wheat pests, whether pathogens or insects. The “worms” reported so far have been either armyworms or fall armyworms, both of which will do about the same type of damage. They feed on leaf tissue and consume more as they get larger, thus it is best to monitor wheat fields early to detect any larvae while they are still small. They usually do not reduce wheat stands, just remove the leaf tissue. However, under stressful growing conditions plant stands may be impacted. Under good growing conditions, plants should be only temporarily affected.  Keep in mind, if there are 8-10 worms per sq. ft. and the worms are small (less than ½-inch), treatment may be justified. In addition, if the leaf feeding continues into the winter, it might be caused by army cutworms, which will feed all winter anytime temperatures are over 45 degrees F, and into the spring.  However, armyworms and fall armyworms will only feed until the first hard freeze but not through the winter.