Wheat in the Great Plains is often plagued by complex of viral diseases including wheat streak mosaic virus, High Plains virus, and Triticum mosaic virus. As we move toward planting season, it is helpful to have a few timely reminders about ways to reduce the risk of disease problems in 2020.

What measures can producers take to prevent outbreaks of viral diseases in wheat this coming season?

There are several things producers can do: delay planting dates as long as feasible, control any significant stands of green foxtail and barnyard grass near fields that will be planted to wheat, and plant wheat varieties with resistance to wheat streak mosaic virus (Joe or Oakley CL) or to the wheat curl mite (Byrd, Langin, TAM 112, T-158, etc.). However, getting good control of these virus diseases starts primarily with controlling volunteer wheat, especially after the recent rainfall events. Control volunteer wheat soon in order to protect the wheat crop planted this fall.

Volunteer wheat within a mile or more of a field that will be planted to wheat should be completely dead at least two weeks before wheat planting. This will also help control wheat curl mites, Hessian fly, and wheat aphids (bird cherry oat aphids and greenbugs, etc.) in the fall.

The most important threat from volunteer wheat for wheat producers in the western half of the state is the wheat streak mosaic complex including wheat streak mosaic, High Plains mosaic, and Triticum mosaic. These diseases cause stunting and yellow streaking on the leaves (Figure 1). In most cases, infection can be traced to a nearby field of volunteer wheat, although there are other hosts, such as corn, millet, and many annual grasses, such as yellow foxtail and prairie cupgrass. Controlling volunteer is one of the most effective way to lower the local risk of the wheat streak mosaic virus complex. 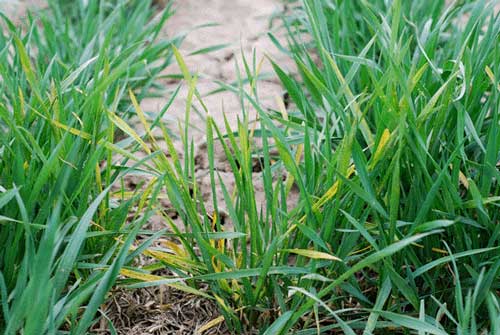 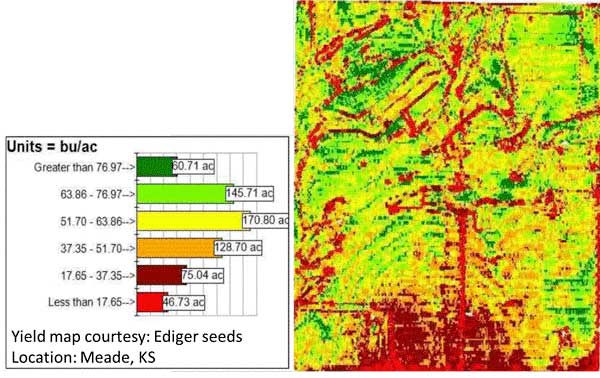 Figure 2. Yield map showing the magnitude of yield loss in a field where the south border was infected with wheat streak mosaic virus. The mean yield of the field was 54 bushels per acre whereas the affected area yielded less than 18 bushels per acre. Yield map courtesy of Tyler and Darwin Ediger, Meade, Kansas. 2015-16 harvest. 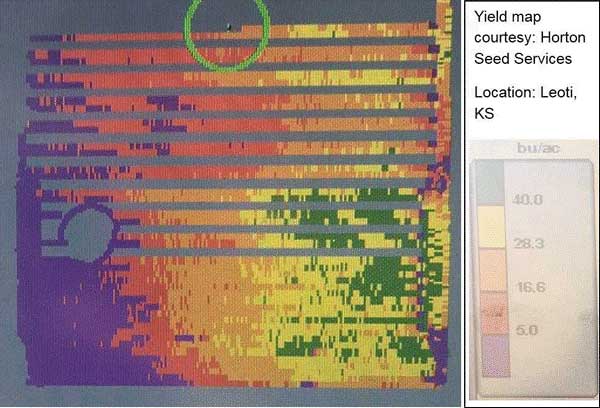 Figure 3. Yield map showing the magnitude of yield loss in a field where the entire field was infected with wheat streak mosaic virus, and the west border was zeroed out. The mean yield of the field was approximately 25 bushels per acre whereas the affected area yielded less than 5 bushels per acre. Yield map courtesy of Rick and Alec Horton, Leoti, from the 2016-17 harvest.

Hessian flies survive over the summer on wheat stubble. When the adults emerge, they can infest any volunteer wheat that may be present, which will keep the Hessian fly population alive and going through the upcoming crop season. We have found that Hessian flies have an adult emergence “flush” after moisture events all summer and even into November, depending upon temperatures. Therefore, it seems it is really more of a continuous potential for infestation, making it even more critical to destroy volunteer in a timely manner. If there is no volunteer around when these adults emerge, they will not be able to oviposit on a suitable host plant. If the volunteer is destroyed while the flies are still larvae, this will help to reduce potential problems.

Hessian flies can be problematic all across Kansas, varying in different locations and years depending upon weather conditions and the amount of volunteer wheat. Hessian fly larvae attack young wheat plants near the soil line. Tillers may be stunted and later may lodge. In heavy infestations, the whole stand may be lost.

Volunteer wheat is a host of barley yellow dwarf virus, and the greenbugs and bird cherry oat aphids that carry it. So in that respect, destroying volunteer helps reduce the reservoir for the barley yellow dwarf viruses. The aphids have to pick up the BYD virus from an infected host plant first in order to become a carrier that can transmit the disease to wheat. Host plants that can carry the disease include volunteer wheat, corn, and others. However, destroying volunteer will have little effect on aphid populations in the fall and spring since the aphids migrate into the state from southern areas.

Russian wheat aphids may also live over the summer on volunteer wheat. While this insect has wings and can be wind borne for hundreds of miles, the vast majority of fall infestations in Kansas appear to originate from nearby infested volunteer.

A number of other pests are also associated with the presence of volunteer wheat. An example in western Kansas is the Banks grass mite. During some years, infestations become established during late summer and early fall on volunteer wheat. Later, as the quality of the volunteer deteriorates, mites move from the volunteer into adjacent fields of planted wheat or other small grains. Occasionally mites will survive the winter and continue to spread into the planted wheat following green-up in the spring.

A concern in the eastern part of the state is the chinch bug. Occasionally, adult bugs will fly from maturing sorghum fields in late summer to nearby fields where volunteer wheat is growing. Where infested volunteer is allowed to grow right up until seedbed preparation just prior to planting, early-planted continuous wheat is likely to become infested. Similarly, volunteer that is allowed to grow through the fall and into the following spring may serve as an attractive chinch bug host.

Another reason to control volunteer is that volunteer and other weeds use up large amounts of soil moisture.

Destroying volunteer after the new wheat emerges is too late. Producers should leave enough time to have a second chance if control is incomplete. Tillage and herbicides are the two options available for volunteer wheat control.

Tillage usually works best when plants are small and conditions are relatively dry. Herbicide options depend on cropping systems and rotations. Glyphosate can be used to control emerged volunteer wheat and other weeds during the fallow period in any cropping system. However, it has no residual activity and will not control later germinating volunteer wheat or weeds.

If glyphosate is used too close to planting time, volunteer may stay green long enough to transmit diseases and insects to the new crop. It may take as long as one week following glyphosate application before the wheat will die, so that needs to be considered when timing the application to break the bridge for insects and diseases. The optimum time to treat with glyphosate is when most of the volunteer has emerged and is healthy and actively growing. Glyphosate can effectively control volunteer wheat that has tillered.

Atrazine is a relatively inexpensive treatment for volunteer wheat control that can be applied anytime in the summer or fall, if rotating to sorghum or corn. In the September to October time period, using atrazine plus crop oil alone can often control small volunteer wheat that has not yet tillered, as well as later-emerging volunteer wheat and other weeds.

If the volunteer has tillered, most of the roots will have grown deep enough to be out of the reach of atrazine. This is when it helps to add glyphosate to the atrazine plus crop oil. Glyphosate is translocated from the leaf tissue throughout the plant. The combination of glyphosate and atrazine will provide a good combination of burndown and residual control on both volunteer that has tillered and later-emerging volunteer. Atrazine rates need to be adjusted to soil type and pH, and may not be appropriate for all areas.

Paraquat use in wheat stubble has increased as an alternative to control glyphosate resistant Palmer amaranth and kochia.  Paraquat also can control small volunteer wheat if good spray coverage is achieved, but is less effective than glyphosate for control of volunteer wheat, especially if plants have started to tiller.  It may be tempting to tank-mix paraquat and glyphosate together to get broader spectrum weed control.  Unfortunately, the two herbicides are antagonistic when combined together, often resulting a dramatic reduction in volunteer wheat and grass control when applied as a tank-mix.  Applying the glyphosate 24 hr in advance of paraquat can avoid the antagonism.  Where it fits in the rotation, tank-mixing atrazine with paraquat generally results in enhanced volunteer wheat control compared to paraquat alone.

In summary, the most important reasons to control volunteer wheat are: