With soils continuing to be very wet in parts of Kansas, more questions have been coming in about the effect of delayed planting on corn yield. A series of studies at K-State looking at delayed corn planting was conducted a few years ago (Figure 1).

Three hybrid maturities were tested: 100-, 108-, and 112-day. Over the two years and three locations (Belleville, Manhattan, and Hutchinson), there were three distinct growing season environments (as related to the environmental stress):

In the High Stress environments (hot, dry summer conditions), yields dropped by about 1% per day of planting delay, depending on hybrid maturity. The shorter-season hybrids had the best yields if they were planted before late May (max. yield = 150 bu/acre), but all hybrids had yield reductions of more than 50% when planting was delayed until early to mid-June.

In many ways, the current growing season is shaping up like the “Early Stress” scenario above, with cool conditions early in the season. Will this cool spring be followed by favorable temperatures and rainfall, or by hot and dry conditions during the rest of the growing season?

While long-term weather predictions are less reliable, the National Weather Service Climate Prediction Center (http://www.cpc.ncep.noaa.gov/) three-month outlook indicates a 40% likelihood of above-normal precipitation and below-normal temperatures for most of the state. 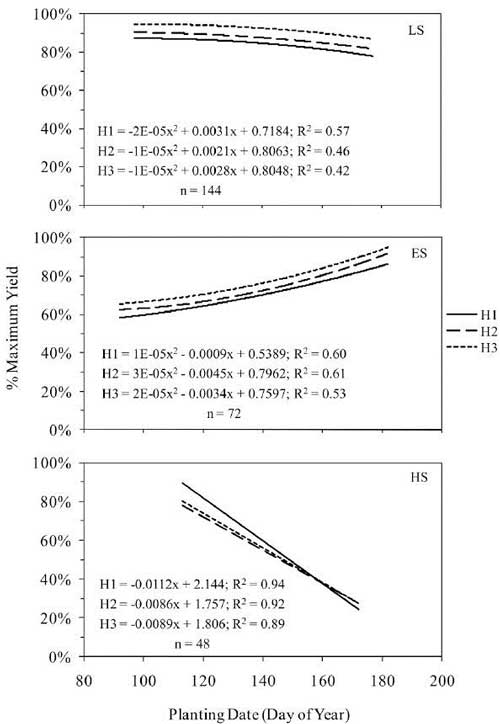 A web-support decision tool called “Useful to Usable” (https://hprcc.unl.edu/gdd.php) can help in making hybrid maturity decisions when planting late. For example, for the Manhattan location, if a 111-comparative relative maturity (CRM) corn hybrid will be planted in May 31, it will take 2,666 growing degree days (GDD) from planting to physiological maturity (black layer). That means it will reach black layer around the last week of September. The earliest first freeze experienced at this location was early October; thus, planting in late-May presents a small risk for early termination of the crop by the first frost (Figure 2). 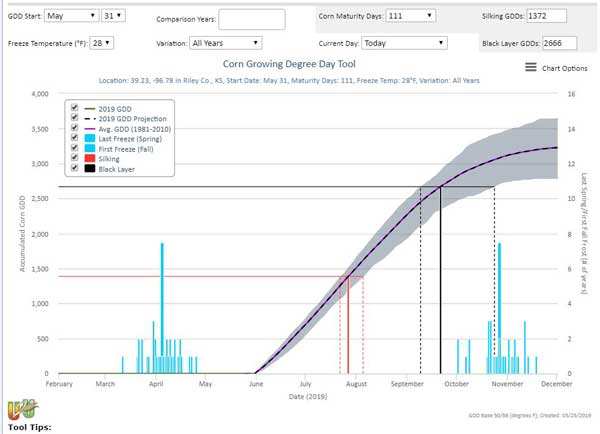 If the planting date is delayed until June 15, without changing the CRM, the final GDD is the same, which may not hold true due to less GDD requirement since the hybrid is planted at later calendar date. Black layer will be reached sometime from mid-to-late October. This late planting situation clearly increases the risk of damage from an early fall freeze (Figure 3), which will result in a low test weight and high moisture content in the grain due to a shortening of the grain filling and drying down period.

By keeping the same planting time (June 15), but switching to a shorter CRM corn hybrid (e.g. 105 CRM), corn would reach black layer about the same time as the 111-CRM hybrid planted May 31 (Figure 4). Thus, changing to a shorter CRM would increase the probability of reaching maturity with a small risk of being impacted by an early fall freeze. 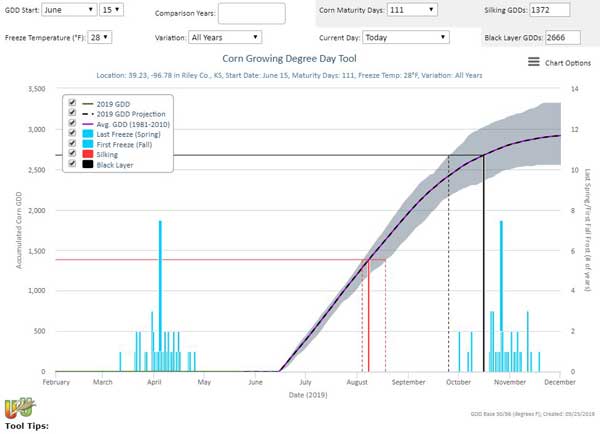 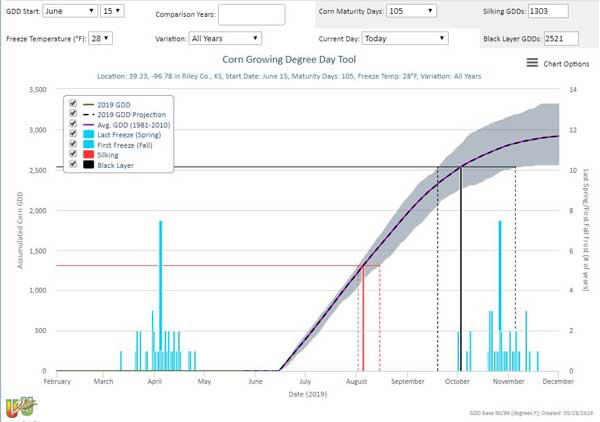 As you move south and east from Manhattan, the risk of early termination from a fall freeze will decrease, but the risk will increase as you move north and west.

For a new GDD tool with more focus on Kansas information, the Kansas Mesonet has a Degree Days page – http://mesonet.k-state.edu/agriculture/degreedays/  – is designed to provide greater flexibility to our users, including options to select the time period and more built-in calculations.

Below are examples of using this tool, looking at May 31 for planting date at a Scandia location. For this scenario, looking to the 2018 growing season, corn will reach maturity close from mid-to late October. 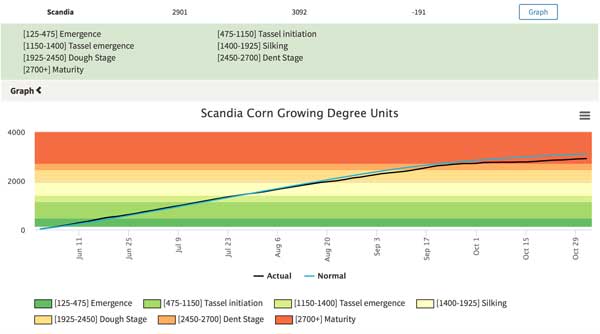 So, depending on your location and what you believe will happen during the rest of the growing season, delayed planting may or may not have much of an effect on corn yields.