Palmer amaranth is one of the most economically-damaging and difficult-to-control broadleaf weeds across the United States. Previously, Palmer amaranth in Kansas has developed resistance to group 2 (ALS), 5 (atrazine), 9 (glyphosate), and 27 (hppd – mesotrione, Huskie, Laudis, Impact, and Armezon) herbicides, leaving growers with very few postemergence options  to manage this weed. Dicamba and 2,4-D (group 4) have been used for many years to help control Palmer amranth,  but farmers have complained about poor control in recent years. Recent research at K-State has confirmed the occurrence of dicamba and 2,4-D resistance in a Palmer amaranth population collected from a long-term conservation tillage study at the K-State Agronomy Ashland Bottoms Experiment Field  in southern Riley County.  This is the first confirmed case of resistance to dicamba and 2,4-D in Palmer amaranth, further magnifying the  challenge to manage this weed in conservation tillage systems.

To confirm 2,4-D resistance, plants that survived the field recommended rate (1X) of 2,4-D (0.5 lb ae/a) applied in the summer of 2018 were transferred to a greenhouse attached to the Department of Agronomy at K-State and were allowed to set seeds. Upon maturity, the seeds were collected, and Palmer amaranth progeny were raised. Using these progeny, a 2,4-D dose-response study was conducted to understand the level of resistance in the suspected resistant population relative to two known 2,4-D-susceptible populations. Results at 21 days after 2,4-D application showed that the resistant progeny survived up to a 16X (8 lb ae/a) dose of 2,4-D, while susceptible plants were completely killed with 1 lb ae/a or less (Figure 1). This population exhibits about 8- to 10-fold resistance to 2,4-D. 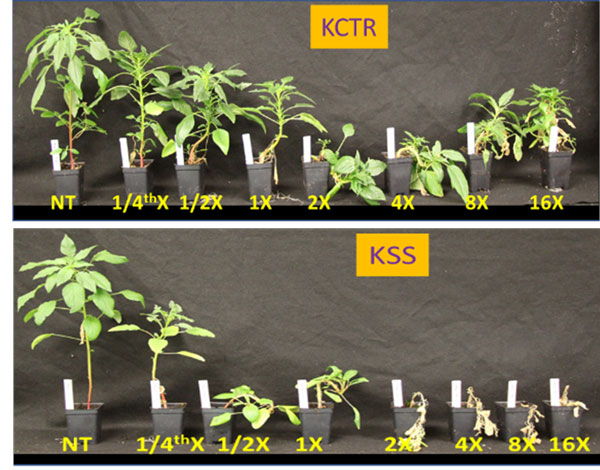 The progeny of the same seed referenced above were also treated with a field-recommended rate of dicamba (0.5 lb ae/a) and showed a high rate of survival (81%), while the susceptible populations were controlled (Figure 2). Cross-resistance to different herbicides in group 4 herbicides has been reported in many other weeds. Experiments are in progress to determine the level of resistance to dicamba and other group 4 herbicides. 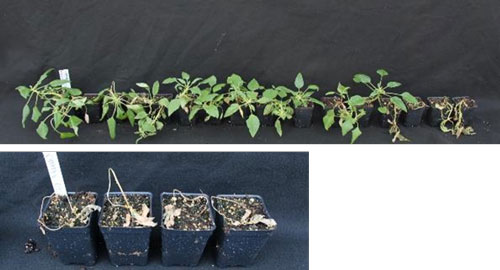 Resistance to other herbicide sites of action

In addition to development of resistance to group 4 herbicides, preliminary research also indicates that this Palmer amaranth population survived application of group 27 (3 oz/a Callisto) and group 14 (10 oz/a Cobra) herbicides. Although resistance to group 27 herbicides in Palmer amatanth is increasing in KS, this population appears to have more survivors (88%) and a much higher level of resistance than previously reported. Resistance to lactofen is not yet officially reported in Palmer amaranth in Kansas. Our data suggests a high percentage of survivors (69%) in response to Cobra  treatment compared to a known susceptible population that was completely controlled. Although group 14 herbicides can be effective in controlling pigweeds, thorough coverage on small weeds is essential for good control. We strongly suspect this population of Palmer amaranth is also resistant to atrazine, glyphosate, ALS herbicides, and perhaps s-metolachlor based upon field observations.  Additional research will be conducted to further determine the extent of herbicide resistance in the Palmer amaranth.

This population of Palmer amaranth was found in a long-term conservation tillage experiment initiated over 45 years ago to compare different tillage systems and crop rotations. Palmer amaranth became increasingly difficult to control, especially in the continuous no-till grain sorghum systems.  The plots were exposed to repeated use of herbicides labeled for grain sorghum, including group 5, 9, 14, 15, and 27 herbicides. These herbicides are known to be excellent options to control broadleaf species. Likewise, the adjacent plots were continuous no-till soybeans, with similar repeated herbicide programs in soybeans. These types of monocropping systems are the perfect scenario to develop herbicide resistance, but were established many years ago to compare the different cropping systems prior to the time when herbicide resistance was much of a concern. This example further demonstrates the importance of a diversified crop rotation and weed control program utilizing multiple effective herbicide sites of action through time.