Soybean is a crop that can remove significant amounts of nutrients per bushel of grain harvested. Because of this, soybeans can respond to starter fertilizer applications on low-testing soils, particularly phosphorus.

Typically, corn shows a greater response to starter fertilizer than soybean. Part of the reason for that is that soils are generally warmer when soybeans are planted than when corn is planted. The typical response in early growth observed in corn is usually not observed in soybeans. However, yield response to direct soybean fertilization with phosphorus and other nutrients can be expected in low-testing soils.

K-State guidelines for soybeans include taking a soil test for phosphorus (P), potassium (K), sulfur (S), zinc (Zn), and boron (B). If fertilizer is recommended by soil test results, then fertilizer should either be applied directly to the soybeans or indirectly by increasing fertilizer rates to another crop in the rotation by the amount needed for the soybeans.

The most consistent response to starter fertilizer with soybeans would be on soils very deficient in one of the nutrients listed above, or in very high-yield-potential situations where soils have low or medium fertility levels. Furthermore, starter fertilizer in soybeans can be a good way to complement nutrients that may have been removed by high-yielding crops in the rotation, such as corn and help maintain optimum soil test levels.

Banding fertilizer to the side and below the seed at planting is an efficient application method for soybeans. This method is especially useful in reduced-till or no-till soybeans because P and K have only limited mobility into the soil from surface broadcast applications.

However, with narrow row soybeans, it may not be possible to install fertilizer units for deep banding. In that situation, producers can surface-apply the fertilizer. Fertilizer should not be placed in-furrow in direct seed contact with soybeans because the seed is very sensitive to salt injury. 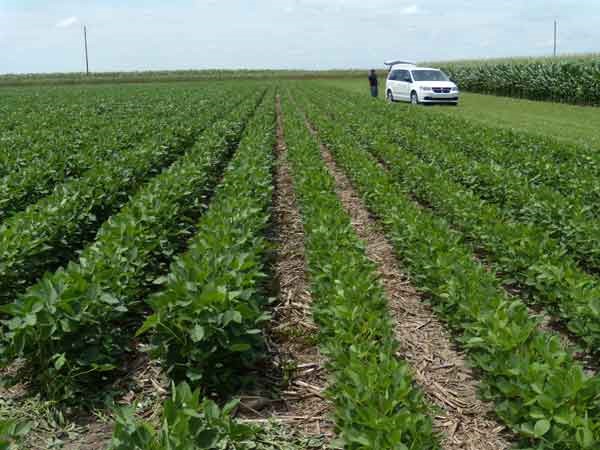