The extremely cold temperatures observed in Kansas in mid-February 2022 have the potential to cause winterkill to the winter wheat crop. However, several factors determine whether winter wheat will actually survive the winter and this particular cold spell. The most important factors from the crop’s perspective include proper cold hardening and root system development, as well as the overall crop status in terms of damage from pests. From an environmental perspective, important factors include air temperature, consequent soil temperatures at the crown level, snow cover, and soil moisture content.

The crop conditions of the 2022 Kansas wheat crop are variable depending on the region and the planting and emergence dates. A mid-September rainfall in southwest and west central Kansas led many growers to plant during the early side of the planting window, resulting in ~50% emergence by early October (Figure 1). This crop produced a large amount of biomass during the fall and started to deplete soil moisture. While the large number of tillers may have allowed for good winterhardiness development, the high moisture consumption of this crop may have worsened its potential to survive through the winter due to a dryer subsoil. Conditions were dryer from then on, slowing down the progress of crop emergence in that region of the state. Thus, even crops planted on time may not have emerged until later in the year. Consequently, the remainder of the state did not reach 50% crop emergence until around October 20, with 30-40% of the wheat not emerging until sometime in November. This is considerably late for regions such as northwest and north central Kansas, although the crop may still perform well when emerged this late in south central Kansas. The crop that emerged by mid-October should have accumulated enough tillers in the fall for a good winterhardiness development. Meanwhile, fields that emerged late had a much more limited development in the fall both in terms of tillers and root development, due to a combination of a late emergence and cool and dry weather conditions. Thus, fields in this condition will be more exposed to potential consequences of the cold temperatures. 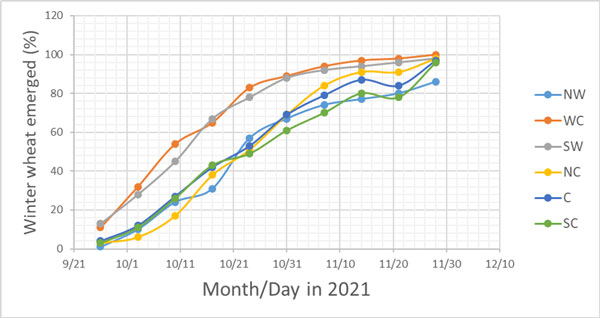 The departure from normal precipitation during the August 28, 2021 to February 24, 2022 period is mostly negative in the majority of the wheat growing area of the state (Figure 2), suggesting that the dry conditions experienced during October and into November extended through the winter – with the exception of a couple of isolated stations that show a positive deviation in south central Kansas. These dry conditions decreased crop growth potential and development during the fall and early winter.

A well-developed crop, in fields that emerged in mid-September to early-October, can handle air temperatures during the winter in the single digits fairly well. However, soil temperatures in the single digits can cause significant damage and winterkill. A less developed crop, such as that fields emerged in late October or afterwards, will be more sensitive to winterkill with higher temperature thresholds for damage. 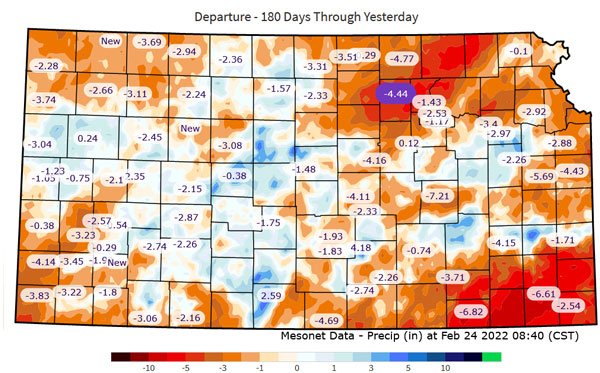 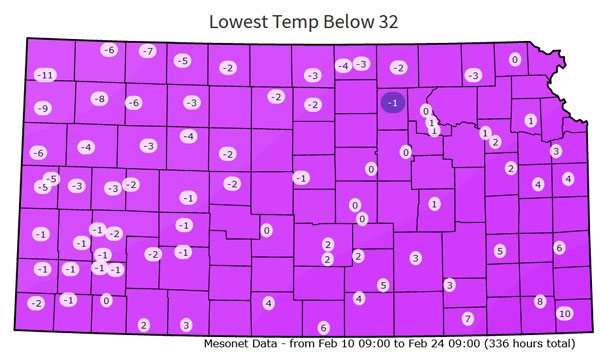 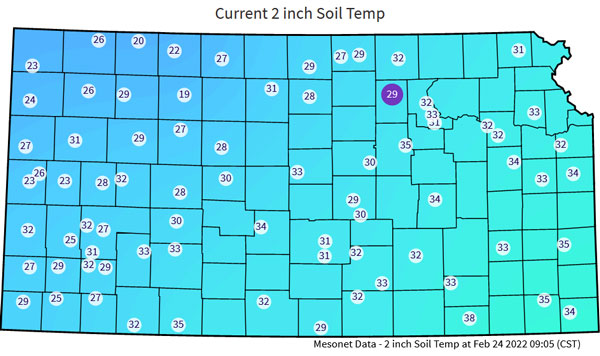 Figure 4. Current soil temperatures (2 inches) at 9:00 am on February 24, 2022. Data from the Kansas Mesonet (https://mesonet.k-state.edu/agriculture/soiltemp/).

Two environmental factors that affect the crop’s response to cold temperatures due to their potential of buffering of low air temperatures are soil moisture content and snow cover. The dry spell observed in the majority of the winter wheat growing region of Kansas prior to the cold spell (Figure 2) also resulted in very low topsoil moisture, which does not help in buffering the lower air temperatures.

Regarding snow cover, the majority of the wheat growing region of Kansas is virtually snow-free with some very light snowfall, less than an inch, the morning of February 24 (Figure 5). This snow was relatively dry and light-weight, decreasing its buffering potential and blowing easily. This snow came too late to insulate the wheat since the coldest temperatures had already impacted the region. The combination of extremely cold air temperatures and dry soils, with a limited amount of snow across the majority of the state, might have caused damage to some fields. 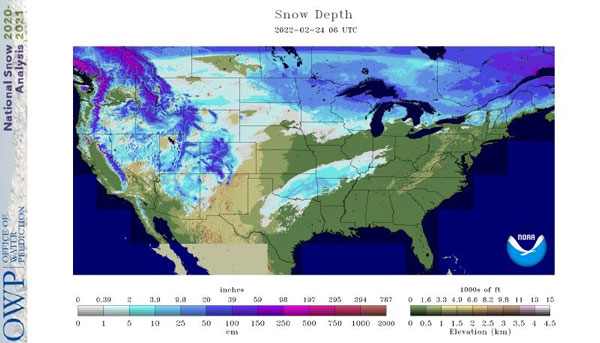 Figure 5. Snow depth as of February 24, 2022 at midnight as reported by the National Oceanic and Atmospheric Administration.

What is the potential for damage and what to look for?

The biggest potential for winterkill is in fields that either emerged too early and had a very lush top-growth, consequently drying the soil; or those fields that emerged late and thus had limited tiller and root development. Because there was very limited snow cover across the state (less than 2 inches), regions where soil temperatures reached the low teens to single digits are more prone to winterkill.

The next 4-6 weeks will be crucial to determine the recovery potential of the crop. Ideally, precipitation would alleviate the current dry conditions and temperatures would warm up slowly so that the crop can start spring development. Continuation of the dry conditions can further impair crop recovery.

There is nothing growers can do at the moment, other than wait until green-up for further evaluation of the crop. As wheat green-up progresses, any winter injury will become more apparent. Injured wheat may initially green up, then go backwards.