Update on drought conditions and the 3-month fall outlook 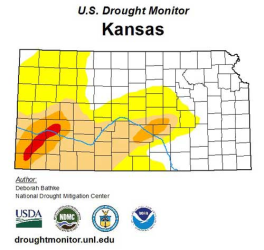 Kansas Climate: What is the latest drought status for Kansas?

The combination of warm, dry conditions resulted in expansion of the moderate to severe drought. Currently, less than half of the state is drought free. Considering this is typically a dry time of the year, even above-normal precipitation will not improve the most severe areas very quickly. Read more from our Climate Team, Mary Knapp and Chip Redmond. 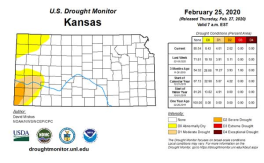 Heavy rain this past week improved the drought status in central and west central Kansas. What is the outlook for the first week of March? Read more from our team in the Weather Data Library, Mary Knapp and Chip Redmond. 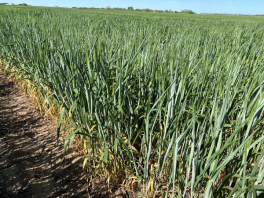 Drought stress taking its toll on Kansas wheat production in 2020

Wheat fields in various parts of Kansas are showing varying degrees of drought stress depending on the location. Read more about this emerging situation in this article from Romulo Lollato, K-State Wheat Specialist. 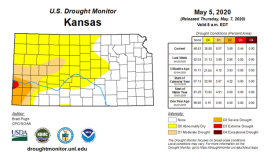 A dry start to May has led to an expansion of drought and abnormally dry conditions in portions of Kansas. Read more from our Kansas Climate Team in this article from Extension Agronomy. 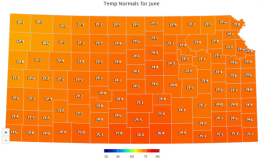 The first week of June has been unusually warm all across Kansas. But, how unusual is it and where does June 2020 rank in the record books? How long will it last? Read more about this hot start to June in this article. 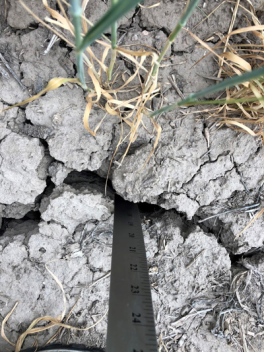 Extreme drought can be found in southwest Kansas with significant impacts on agriculture. Learn more about the Drought Monitor and find out what to expect over the rest of June in terms of rainfall and heat. (Cracked soil photo credit: Josh Coltrain) 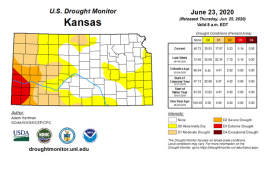 While portions of Kansas did get significant rainfall in the last week, other areas remain dry with expansion of drought status in many locations. Read more about the drought status for Kansas and what to expect for moisture and temperatures as we head into July. 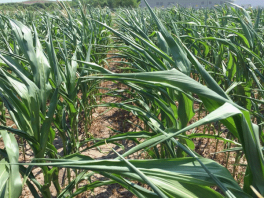 Heat wave for the weekend: Update on high temperatures and heat stress

The Climate Prediction Center and the National Weather Service have issued heat outlooks for the weekend and continuing through the end of July. Even western portions of Kansas can expect elevated dew points and increased low temperatures. 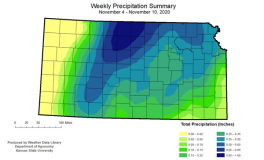 While certain areas of Kansas received some precipitation in the last week, much of the state remains quite dry. Did the rainfall result in a change in drought status for those areas? What is expected for the next week in Kansas? Read more in this article from the Kansas Climate team. 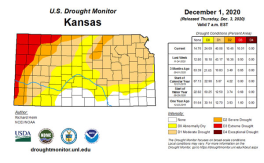 Heavy precipitation in some areas of Kansas resulted in some improvement in the drought status. Other areas that missed the rain declined or stayed the same. What is the outlook for the next 2 weeks in KS? Learn more in this article. 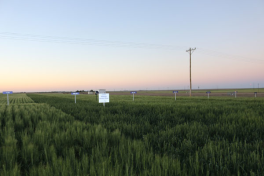 Many wheat fields around Kansas emerged later than desired due to extremely dry soil conditions in the fall. What are the expectations for late-emerged wheat and what factors contribute to the expected yield potential for those fields? 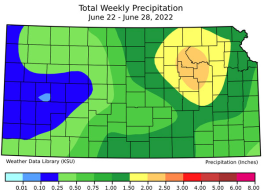 This article summarizes the weather in Kansas during the week of June 22 to June 28. Isolated, heavy rains in some areas led to improvement in drought status, while the western regions remain dry. The northeast portion of KS could see moderate rainfall through the weekend. What will July bring for Kansas? 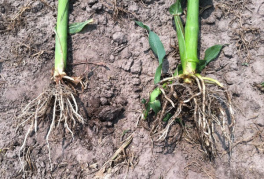 Since the end of June, rainfall has been sporadic and uneven across Kansas. In central and western Kansas, several corn fields under dryland conditions have been suffering a combination of drought and heat stress. Common symptoms of drought/heat stress in corn are discussed in this article.

Dryland corn in many parts of western KS is struggling. Elevated levels of nitrates are a common concern with drought-stressed plants. This article discusses the best options for these corn fields. Failed dryland corn may fill a gap for livestock producers with limited forage options. Testing prior to feeding will be particularly important. 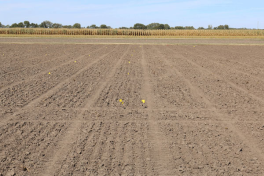 Soils in portions of western and central Kansas have become steadily drier through the late summer and early fall. Topsoil conditions are now very dry in many areas of Kansas. Wheat producers have limited options for planting: "dust in" the wheat, plant deeper, or wait for rain. Read more about these options in this article. 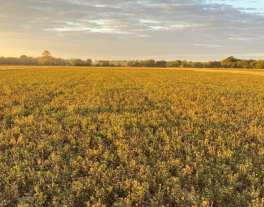 Drought conditions throughout Kansas are forcing farmers to consider harvesting soybeans for forage instead of grain. Many factors should be considered when making this decision. Herbicide applications made during the growing season are one thing to consider. Many herbicide labels restrict the use of soybeans as a forage.

Drought progression in Kansas during the 2022 growing season