During this time of the year, it is normal to start seeing some wheat fields turn yellow. The pattern may vary from field to field, sometimes as large areas, small patches, or streaks of yellowish wheat in some fields this spring. What are some of the main causes of yellow wheat in the spring?

Nitrogen deficiency. As the crop starts to grow in the spring, its nitrogen (N) demand increases and it is common to see an N deficiency, especially while the temperatures are lower and not much N is mineralized from the soil organic matter. Nitrogen deficiency causes an overall yellowing of the plant, with the lower leaves yellowing and dying from the leaf tips inward (Figure 1). Nitrogen deficiency also results in reduced tillering, top growth, and root growth. The primary causes of N deficiency are insufficient fertilizer rates, application problems, applying the nitrogen too late, leaching from heavy rains, denitrification from saturated soils, and the presence of heavy amounts of crop residue, which immobilize nitrogen. 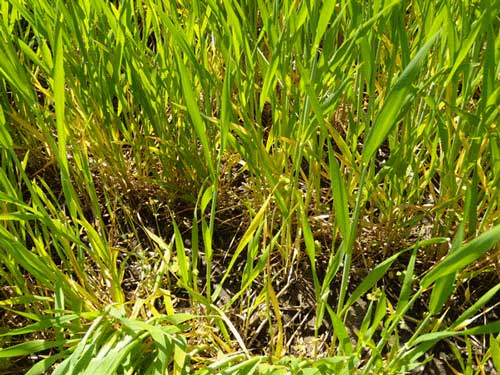 Sulfur deficiency. Similar to nitrogen, the crop’s sulfur requirement increases in the spring as it takes off on reproductive growth. Due to a decrease in sulfur deposition in the rainfall, there has been an increasing number of fields with sulfur deficiency symptoms in Kansas in recent years. Deficiencies can be more common in areas where organic matter levels are low -- especially on sandier soils or eroded areas of a field. Sulfur deficiency can also occur where soils are cold in the spring due to a reduced rate of release of sulfur from organic matter. The symptoms of sulfur deficiency are very similar to nitrogen deficiency. However, sulfur deficiency differs from N deficiency in that the whole plant is pale, with a greater degree of chlorosis (yellowing of plant tissue) in the young/upper leaves (Figure 2). The pattern of chlorosis may show gradation in intensity with the younger leaves at the tip yellowing first because sulfur is not easily translocated within the plant. But the entire plant can quickly become totally chlorotic and take on a light yellow color. Symptoms often become more pronounced when plants begin growing rapidly while soil conditions are such that organic matter mineralization and sulfur release rates are low. Symptoms may disappear as the temperature warms up and moisture conditions improve, which increases the rate of mineralization of sulfur from organic matter and the rate of root growth. 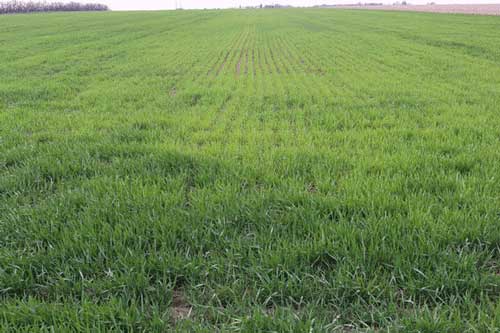 Poor root growth. Many potential causes exist for reduced root growth: dry soils, later sowing, waterlogging, or elevated crown height caused by shallow planting depth or excessive residue in the root zone (Figure 3). If the plants have a poor root system, then the root systems are not extensive enough to access enough nutrients causing the plant to turn yellow.

Cold weather injury at the tillering stage. A sudden drop in temperatures after the wheat has greened up but before it reaches the jointing stage will burn back the top-growth, often giving the field a yellowish cast but not necessarily reducing yield potential (Figure 4). This injury is likely cosmetic, provided the growing point is still healthy. Variety release from winter dormancy can also affect the extent of the symptoms, as early varieties would have been less cold hardy and thus likely sustain more injury. 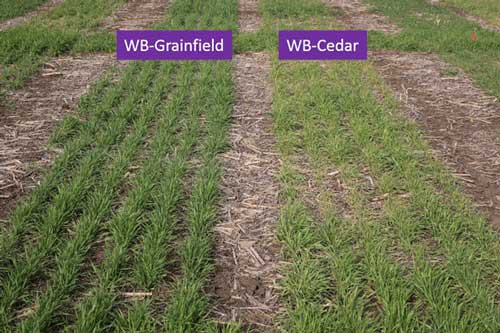 Freeze injury at the jointing stage. Jointing wheat can usually tolerate temperatures in the mid-to-upper 20’s with no significant injury. But, if temperatures fall into the low 20’s or below for several hours, the lower stems, leaves, or developing head can sustain injury (Figure 5). This has not been a problem this year yet, but in cases there are severe temperature drops in the near future as the crop greens up and joints, producers should scout their fields to assess the yield potential. If the leaves of tillers are yellowish when they emerge from the whorl, this indicates those tillers have been damaged. 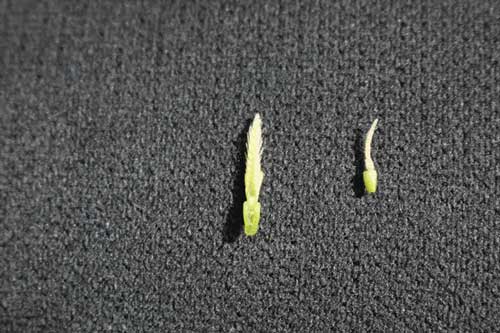 While the extent of potential freeze damage depends on minimum temperatures achieved, duration of cold temperatures, and stage of wheat development; other factors such as crop residue, position on the landscape, wind speed, snow cover, and soil temperatures also play a role. Figure 6 shows an example of the effect of heavy residue on potential wheat damage. In this photo, parts of the field with a heavier layer of residue show greater cold damage than lighter residue. This can be partially explained because under a thicker layer of residue, the wheat crown tends to form closer to the surface and therefore is more exposed to freezing temperatures.

Leaf senescence and opportunistic leaf spotting diseases. After the winter, it is normal for some of the leaves in the lower canopy to go through senescence and perish, sometimes translocating nutrients to the new growth and sometimes just due to different natural reasons. This causes a yellowing of the lower wheat canopy. Some opportunistic saprophytic fungi or fungal diseases such as leaf spots (Septoria tritici blotch, Stagonospora nodorum leaf blotch, and tan spot), may colonize these dying tissues as shown in Figure 7. For the most part in Kansas, these diseases do not cause economic damage as long as they remain on the lower leaves, especially if they occur in tissue that is dying already. They might become a problem and warrant a fungicide application in specific situations, such as when a susceptible variety is planted into heavy wheat residue, and when symptoms appear in the upper canopy after the flag leaf has emerged (see Stagonospora nodorum leaf blotch, in Figure 8). 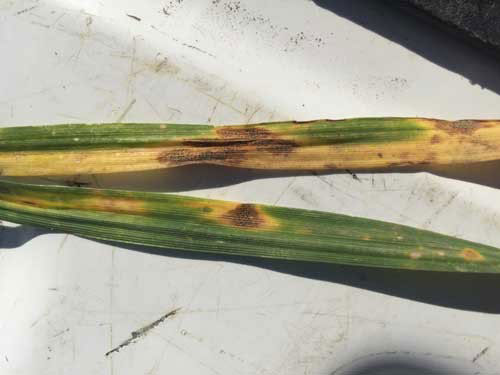 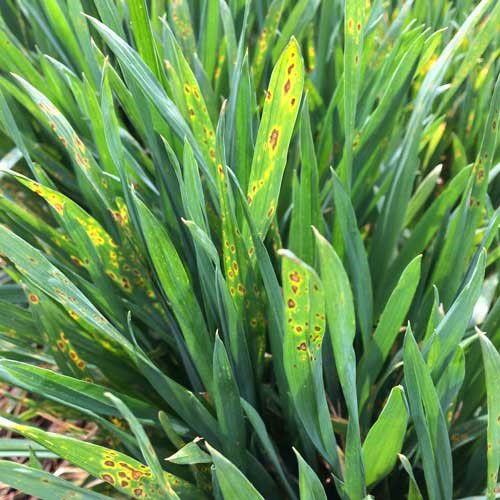 Iron chlorosis. Iron chlorosis is not common in wheat in Kansas, but does occur on certain high-pH, calcareous soils in western Kansas. Newly emerging leaves will have green veins, with yellow striping between the veins. Eventually, the entire leaf may turn yellow or white.

Soilborne mosaic or spindle streak mosaic. Soilborne mosaic and spindle streak mosaic are viral diseases that occur primarily in eastern and central Kansas, but are rare in western Kansas. These diseases are most common in years with a wet fall, followed by a cool, wet spring. These diseases are often most severe in low areas of a field where soil conditions favor infection. Symptoms are usually most pronounced in early spring, then fade as temperatures warm. Leaves will have a mosaic of green spots on yellowish background. Infected plants are often stunted in growth.

Wheat streak mosaic complex. This viral disease is vectored by the wheat curl mite. Yellow areas in field will appear in spring around that jointing stages of growth; usually on field edges adjacent to volunteer wheat. Leaves will have a mosaic of yellow streaks, stripes, or mottling (Figure 9). Plants infected with wheat streak mosaic are often smaller than healthy plants. There are two additional viruses, Triticum mosaic virus and high plains mosaic virus, that also result in similar symptoms. 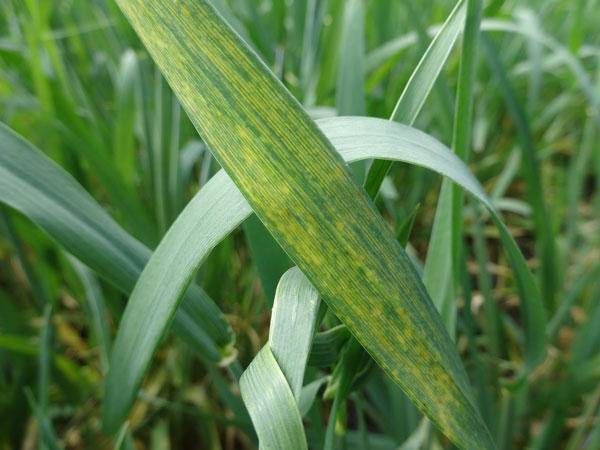