The best time to topdress winter canola is during the rosette stage when the canola is dormant. Usually this can easily be accomplished by topdressing in January or February, since temperatures are cold enough to keep canola at the rosette stage. If N is applied as a liquid when canola is green and physiologically active, be careful that the rate applied does not cause leaf burn. Both dry and liquid fertilizers are effective products.

Current conditions for most of Kansas are wet. The greatest limitation to topdressing at this time will be waiting for the ground to freeze up or to dry out. After a brief stretch of below-normal temperatures in early November 2019, a warmer December caused the crop to actively grow and add new leaf area. In some areas, the canola may have more green leaf area than what we typically see at this time of the growing season. Canola can withstand these warmer periods and still successfully overwinter as long as the temperature swings are not too dramatic.

Producers should check their fields for surviving plants before applying a topdress application even if there is no concern for poor winter survival (Figure 1). Where stand thinning is greatest, it may be advisable to wait until canola is actively growing again before topdressing. This will ensure that there is adequate spring stand to take to harvest. 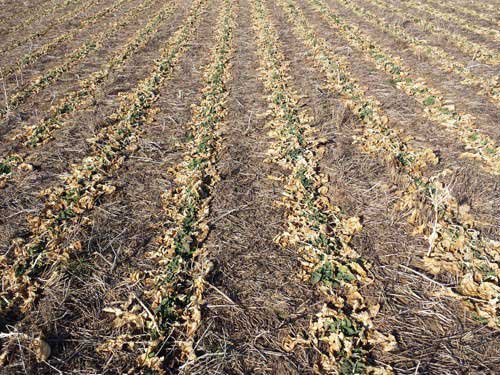 Nitrogen. About two-thirds of the total N needed by the canola crop should be applied as a winter topdress. This can be done at dormancy or as plants begin to show increased growth, but before the plants bolt. The reason is that N uptake increases rapidly before bolting. Topdress applications should be based on an updated assessment of yield potential, less profile residual N, and the amount of N applied in the fall.

Either solid or liquid forms of N can be used in the early spring. Once the weather warms and growth begins, applications using streamer bars or solid materials are preferred for broadcast applications to prevent/avoid leaf burn.

Sulfur. If canola is deficient in S, the consequences can be very serious because the crop needs S to produce protein in the seed. For this reason, soils having less than 20 lb/acre sulfate-S (10 ppm SO4-S) in the upper 24 inches should receive supplemental S. A good rule to follow is to keep S-to-N availability at a ratio of about 1 to 7. Another simple guideline is to apply 20 lb S per acre, which will be sufficient for low and medium yield levels. Sulfur can be applied in the fall and incorporated into the seedbed or surface-applied with N in the winter topdressing. Canola growers may consider using elemental S, or sulfate forms (e.g. ammonium sulfate, or liquid ammonium thiosulfate). Since elemental S must oxidize to become plant available, it should only be applied in the fall. Ammonium thiosulfate or ammonium sulfate can be applied in the spring or fall, but thiosulfate should not be topdressed directly on green tissue or placed with seed to avoid short-term phytotoxicity.

Boron. If deficient, boron is one micronutrient that can have negative consequences on canola yield. Typically, boron deficiency is not something we have seen in Kansas. However, if there are micronutrients that could influence yield, then boron would be one of them. The most important thing is to know what your soil sample states. Applying boron may help to reduce flower abortion and enable efficient pod filling. However, there is not much room for error when comparing adequate boron fertility levels and toxic levels that might result from over application. Because of this, application rates of boron are often 1.0 lb per acre or less. Soil and foliar applications of boron are effective. Foliar applications can be made with herbicides, and soil-applied boron can be either broadcasted or banded. Make sure applications are uniform across the field to avoid toxicity, and avoid contact with the seed for band-applied boron.