The recent cold temperatures experienced during 31 March – 14 April 2022 were enough to cause freeze damage to winter wheat in parts of Kansas. The actual freeze damage will be region-specific depending on crop growth stage and minimum temperatures (some regions had a worst combination of temperatures and crop growth stage) and, within a region, field specific owing to many individual aspects such as crop density, residue level, etc. While there is nothing that we can do immediately, growers can prioritize fields where they sample for freeze damage symptoms depending on conditions that were more likely to result in freeze damage. Below, we make comments about these individual conditions that might help growers prioritize fields to be sampled; as well as injury symptoms to look for.

Field conditions that can affect the potential for freeze damage

Density of the stand and condition of the plants. If the stand is thick, that will tend to reduce the extent of freeze damage as the warmth of the soil will radiate up into the canopy. On the other hand, well-fertilized succulent wheat has often sustained more freeze injury than wheat that is not as well fertilized. Thin stands are at higher risk of injury because the air can penetrate the stand more easily. If the plants were wet before the freeze, this can result in a coat of ice on the plants that may protect the growing point to some extent. If temperatures get too low, however, the cold will go through the ice.

Residue. No-till fields can many times sustain more freeze damage because the residue acts as a blanket and doesn’t allow the heat from the soil to radiate up into the plant canopy.

Temperature gradients within the field (position on the landscape). Low spots in the field are almost always the first to have freeze injury. The coldest air tends to settle in the low areas, especially under calm wind conditions.

Wheat variety. Although the sensitivity to freezing temperatures at a given growth stage is very similar across all varieties, varieties can differ in their release from winter dormancy in as much as three weeks. Because of differences in winter-dormancy release, late-release varieties may escape a freeze injury because they are delayed in their development.

Injury symptoms to look for in the coming days

There are many possible scenarios after a freeze, and producers should not take any immediate decision following a freeze event. Several days of warm temperatures are needed to properly assess freeze damage to the wheat crop.

Wheat that hasn’t started to joint yet (Feekes 3 through 5) might suffer damage to the existing foliage, but the growing points should mostly be protected by the soil temperatures that were sustained above 38 degrees F across the entire state; thus likely escaping freeze injury. This wheat will have cosmetic damage to the leaves that will show up almost immediately as leaf tip burn (Fig. 1). 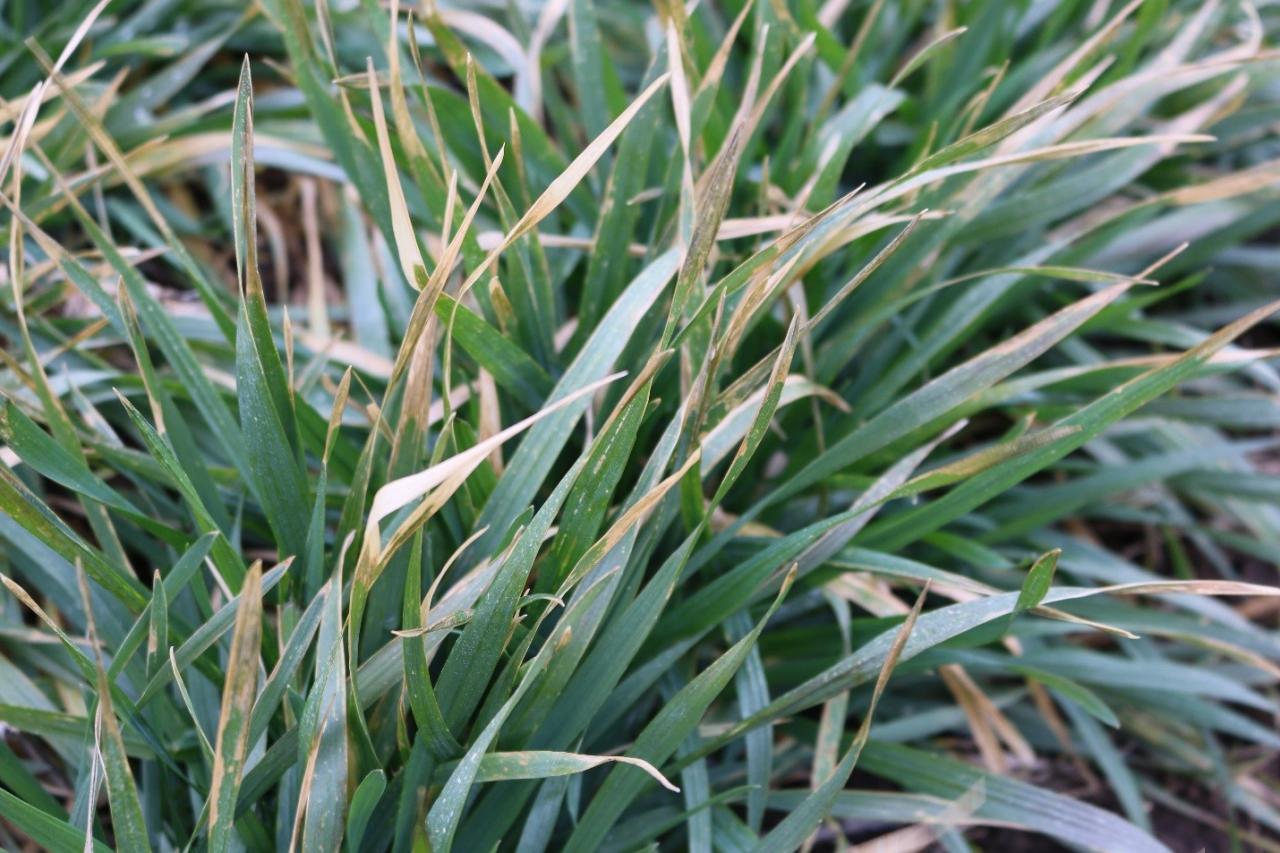 Figure 1. Leaf burn from freeze damage. By itself, this is cosmetic damage only. Photo by Romulo Lollato, K-State Extension Wheat and Forages Specialist.

Where wheat was at the jointing stage, producers should watch their fields closely over the next 7 to 10 days from the freeze event for the following: 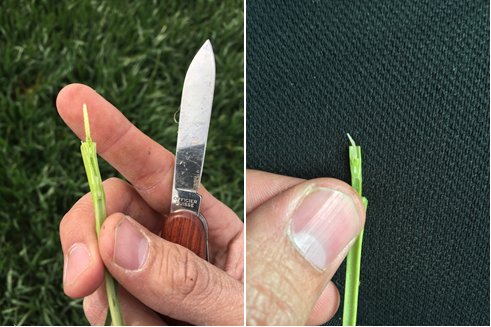 Figure 2. Following an early freeze, crops at jointing might still develop healthy heads (left panel), but depending on minimum temperatures and duration of the freeze event, the developing head might be killed even if still within the stem killed (right panel). The dead head is whitish and flaccid while the healthy head is light green and turgid. Photos by Romulo Lollato, wheat and forage specialist, K-State Research and Extension.

Where stems and/or growing points were killed by the freeze, new tiller growth (coming from the crown area) will occur (Fig. 3). In many cases, new tiller growth can be observed even when the stems do not show any symptoms of freeze damage for some time. In those cases, the first sign that the tillers are dead is the sudden growth of new tillers at the base of the plant. 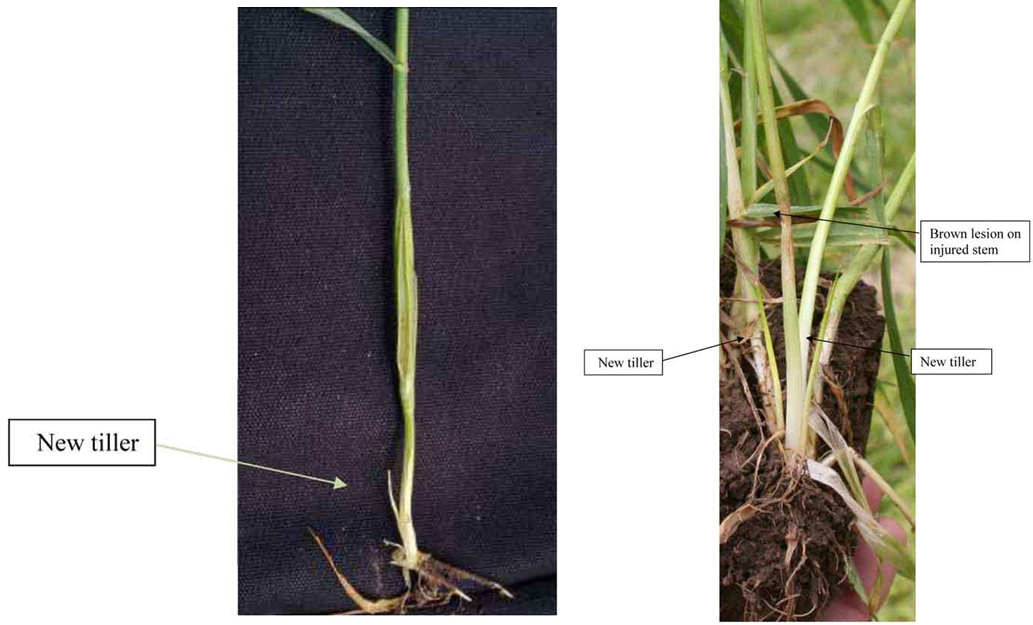 Figure 3. Left: A stem that was split open by having ice form within the stem. This stem has died and a new tiller has begun to grow at the base. Right: Some of the tillers on this plant had freeze damage to the lower stems. These stems are dying, but the symptoms may not be immediately evident. The growth of new tillers from the base of the plant is a sure sign that the main tillers are dead or dying. Note the brown lesion on the stem with the two new tillers. Photos by Jim Shroyer, professor emeritus, K-State Research and Extension.

Some crops in south central Kansas and southeast Kansas might have been at this stage when the freeze happened. At the boot stage, wheat can be injured if temperatures drop down into the mid to upper 20’s for several hours. Injury is more likely if this occurs repeatedly and if it is windy at night. To detect injury, producers should wait several days then split open some stems and look at the developing head. If the head is green or light greenish in color and seems firm, it is most likely going to be fine. If the head is yellowish and mushy, that’s a sign of freeze injury.

Freeze injury at the boot stage causes a number of symptoms when the heads are enclosed in the sheaths of the flag leaves. Freezing may trap the spikes inside the boots so that they cannot emerge normally. When this happens, the spikes will remain in the boots, split out the sides of the boots, or emerge base-first from the boots.

Sometimes heads emerge normally from the boots after freezing, but remain yellow or even white instead of their usual green color. When this happens, all or part of the heads have been killed. Frequently, only the male parts (anthers) of the flowers die because they are more sensitive to low temperatures than the female parts. Since wheat is self-pollinated, sterility caused by freeze injury results in poor kernel set and low grain yield.

It’s possible for some of the spikelets to be alive and a healthy dark green while other spikelets on the same head are damaged. If a spikelet flowers normally and the kernels on that spikelet develop normally, then the head is at least partially viable and will produce grain (unless it freezes again, of course).