The five-year average of corn acres harvested reported by NASS leads to an estimate of approximately 5.5 million acres of corn and 200,000 tons of residue produced annually in Kansas. In addition, 2.8 million acres of grain sorghum and 70,000 tons of residue were produced. While not all acres are suitable for grazing, this represents a tremendous resource for the state. Residue yield and nutrient contents are dependent on grain yield, fertility, harvest date, and conditions at harvest. Nutrient content of residues is additionally impacted by duration and timing of grazing initiation. 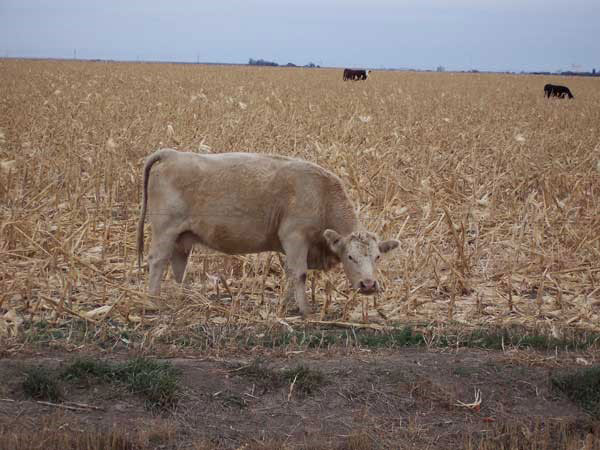 The amount of grain left in the field has been reduced considerably compared to historical levels through varietal and harvest equipment improvements. However, weather conditions can result in significant ear drop or plant lodging. Before grazing, scout fields to look for piles of grain on the ground and determine if there is over 8-10 bushels of grain on the ground. If so, management steps should be taken to remove these piles prior to turning out cattle on the residue. Directions to estimate ear drop and head drop can be found here. While sorghum grain is always processed prior to feeding to crack its tough shell coat, cattle can still founder on downed grain sorghum heads.

A nutritional evaluation of grazed Kansas corn and sorghum crop residues was conducted with the help of numerous producers and county agents across the state. Table 1 summarizes values from that survey.

A more detailed look at plant components indicate any grain available would have the highest CP content followed by the leaves. The cob has the lowest protein and energy value. The stalk and husks have similar crude protein content, but more energy is available from the husks than the stalks due to the lower lignin content. In general, leaves from sorghum residue have higher CP content than corn leaves. The stalks of corn and sorghum are similar in CP, but digestibility is somewhat higher in sorghum than corn. More details on nutrient concentrations of crop residues can be viewed in this UNL publication.

To ensure adequate residue remains on the field after grazing, we can use animal weight and grain yield to determine the amount of grazing available.  Cattle will readily remove approximately 15% of the residue (leaves and husk), but can be forced to remove more if desired. The goal should be to leave at least ½ of the total amount of residue on the field.

If an irrigated corn yield is 180 bu/acre, a rule of thumb is to divide by 3.5 to get grazing days for a 1200-pound cow. In this case, 180 bu/acre corn residue should provide approximately 51 days of grazing (180/3.5 = 51) for a 1200 lb cow. The harvest index (grain production/total biomass) is similar for both corn and grain sorghum (1.6%). So, an 85 bus/acre dryland sorghum divided by 3.5, would provide approximately 24 days of grazing (85/3.5 = 24). A lactating cow or a heavier cow will consume more dry matter and the days of grazing would be adjusted downward. A spreadsheet is available to calculate stocking rate based on animal body weight and grain yield.

Cattle will selectively graze the crop residue, eating the highest quality portions first, grain then leaves and husks.  Depending on the stalking rate, amount of grain available, and nutrient demands of the cows, no energy or protein supplementation may be needed early in the grazing period for dry cows with a body condition score of 5 or more and grazing as described above.  Weathering and trampling will decrease quality over time and this loss is greater with moisture and high humidity.

Cattle will cause soil compaction in paths leading to and around a water source. These compacted areas will only be surface compaction in the top 2-inches of soil. These compacted areas can be remedied by shallow tillage. Results on soil compaction from grazing have shown mixed results. A study near Bushland, TX found surface compaction in a no-till system reduced crop yield after several years of grazing. While grazing studies from Nebraska found no increase in compaction and increased crop yield. Studies from western Kansas found compaction to only occur in the top two inches when grazing occurred on wet soils and shallow tillage removed any compaction. Compaction will be less on frozen, dry, sandy soils. It is best to remove cattle from the field to a nearby perennial pasture if the field is wet and not frozen. Also, the producer should be open to using shallow tillage should compaction occur.

Another common concern about grazing residue is nutrient removal. Nutrient removal will vary by the type of animal, with a growing calf requiring more nitrogen than a mature dry cow. Dry cows will typically be used to graze residue, which will remove between 1 and 2 lbs of N per acre (depending on crop yield) and few other nutrients. Crop residue is low in phosphorus (P); thus, producers will likely supply a free-choice mineral, resulting in an increase in the amount of P and calcium left in the field. Wind will blow leaves and husks off fields, but manure remains in place.