Soybean planting is well underway in Kansas (52% planted), based on the USDA-NASS Crop Progress and Condition Report from May 24, 2020.  Recent heavy rainfall in portions of Kansas may have resulted in standing water in some fields. 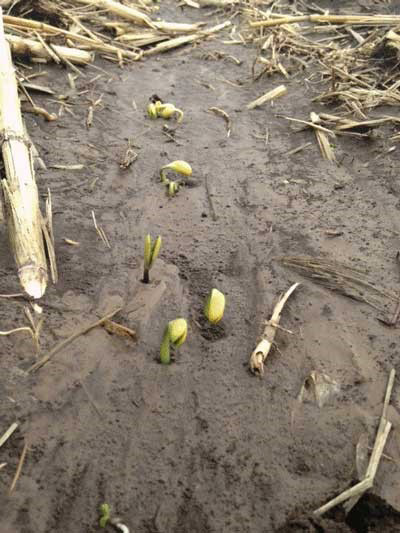 Wet soil conditions will slow emergence, make the soil more susceptible to compaction (limiting root growth), and cause poor plant-to-plant uniformity after emergence. Sidewall compaction occurs when soybeans are planted when the soil is too wet, immediately followed by dry weather. Soil surface crusting is another potential challenge for soybean emergence.

After emergence, how will soybeans respond to standing water and saturated soil conditions? 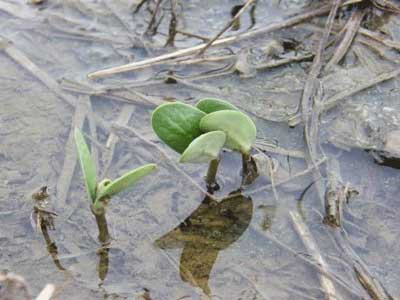 To find out whether the soybeans are damaged after the water recedes, split the stem at the tip and examine the growing point. A healthy growing point will be firm and white or cream colored. A soft, dark growing point indicates injury. In some cases, the silt coating the plant after short-term flooding can cause more injury and plant death than the water itself.

Even if the fields did not have standing water and plants were not totally submerged, waterlogged soils can cause problems if the waterlogging lasts too long. When soils are saturated for a prolonged period of time, a lack of oxygen in the roots can lead to the accumulation of lactic acid and other products of anaerobic respiration. This is the underlying cause of damage to plants in waterlogged soils where only the roots are flooded.

Injury can depend on variety, growth stage, duration of waterlogging, soil texture, fertility levels, and diseases present. Interactions of these factors make it hard to predict how a given soybean field will react to waterlogged soils. 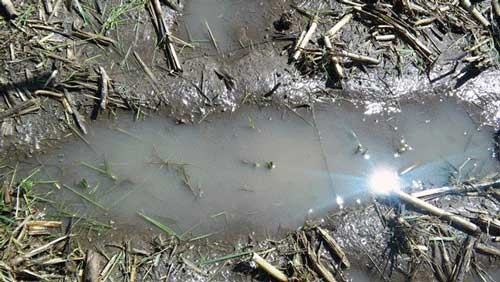 Variety differences have been reported and researchers have identified possible genes associated with tolerance to waterlogged conditions. Scientists in Missouri have screened a number of soybean varieties, subjecting them to two periods of flooding, each two weeks in duration. The average yield reduction for all varieties was 61%. Yields were reduced by 39% for the most tolerant varieties and 77% for the least tolerant. Producers should check with their seed supplier regarding information about a particular variety.

Research examining the influence of growth stage on the degree of injury from waterlogged soils has provided mixed results.

The longer the soil is saturated, the greater the injury, mortality, and consequent yield reductions. During germination, saturated conditions for 48 hours can decrease germination by 30% to 70% depending on the timing of the saturation, nearly twice the yield decrease resulting from durations of 24 hours or less. For plants that have emerged, a waterlogged condition that lasts for less than two days often causes little or no noticeable yield reduction. Intolerant varieties begin to show yield reductions after 2 days of saturation, but tolerant varieties can withstand up to 4 days of waterlogging with little reduction in yield. As the duration of soil saturation increases, researchers have documented greater reductions in population, height, pods per plant, yield, and leaf tissue nitrogen.

Soil conditions play a role in the severity of injury from waterlogging as well. Coarser textured soils will drain more quickly, minimizing the duration of oxygen deprivation to the roots. Fine textured soils maintain saturation longer, increasing the chances of injury.

Fields that are flooded, or are at or above the water-holding capacity of the soil, will be more likely to develop root rot problems. Flooding accompanied by cooler temperatures would be favorable to Pythium root rot whereas warmer temperatures would favor Phytophthora and Rhizoctonia root rots. Whether Phytophthora root rot develops often depends on the tolerance or resistance of the variety used. If the flooding occurs beyond the first week or two after emergence, any seed treatment fungicides that may have been used will no longer be effective. 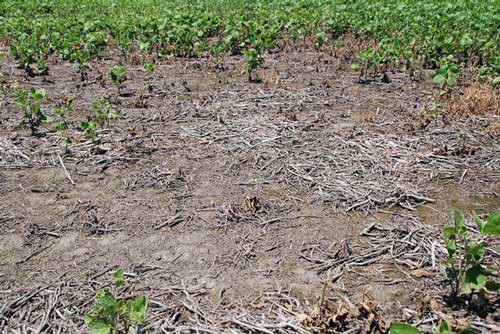 Figure 4. Stand loss in a wet area due to Phytophthora root rot. Photo by Doug Jardine, K-State Research and Extension.