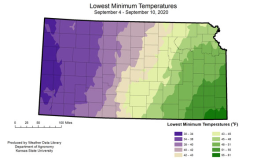 Extreme low temperatures were recorded in western Kansas this week. What are the potential impacts to corn, soybean, and grain sorghum in that part of the state moving forward? 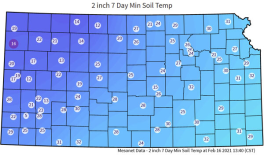 During the bitterly cold period in mid-February, air temperatures dropped as low as -30 F in some locations. Soil temperatures, however, did not get near that cold. Several interacting factors control soil temperature flux. Learn some basic principles about soil temperature changes in this article. 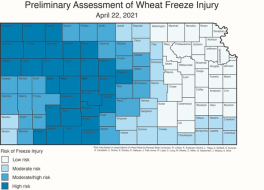 Several factors interact to influence the degree of freeze damage to wheat. Some of these factors are wheat growth stage, air temps, duration of cold weather, soil temps, snow cover, landscape position, and crop residue. Where does the KS wheat crop stand after this latest bout of cold weather? 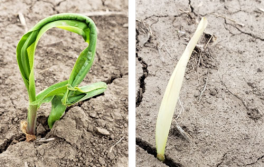 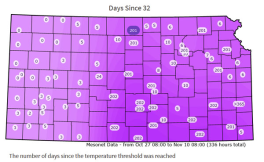 Some areas in Kansas are still waiting for the first freeze

Several locations across Kansas have passed 200 days since recording freezing temperatures. For some of these places, this will set the record for the latest freeze. Learn more about the climatology of late freezes and the impacts of extended growing seasons in this article.