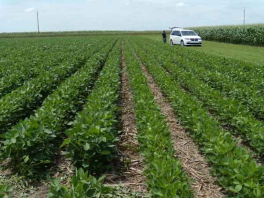 Is There Any Value to Starter Fertilizers on Soybeans?

Soybean is a crop that can remove significant amounts of nutrients per bushel of grain harvested. Because of this, soybeans can respond to starter fertilizer applications on low-testing soils, particularly phosphorus. Typically, corn shows a greater response to starter fertilizer than soybean. Part of the reason for that is because soils are generally warmer when soybeans are planted than when corn is planted. The typical response in early growth observed in corn is usually not observed in soybeans. However, yield response to direct soybean fertilization with phosphorus and other nutrients can be expected in low-testing soils. Some research under irrigated, high-yield environments with sandy soils also suggests a potential benefit of small amounts of N in starter fertilizer. 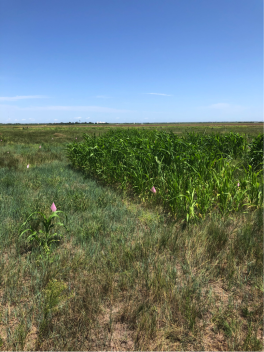 There are still many questions about row spacing for soybean production. This article provides a summary of recent research from K-State. Compared to the conventional 30-inch row spacing, soybeans in narrow rows (15-inch or less) in these tests were likely to show equal or slightly greater yields (2-12%), particularly when the yield environment was less than 50 bushels per acre (regardless of planting date, seeding rate, or maturity). Above this yield threshold level, soybean did not show yield response to changing the row spacing. Overall, the common denominator of the response to row spacing is the inconsistency, denoted by the wide error of responses and by the variability between site-years. 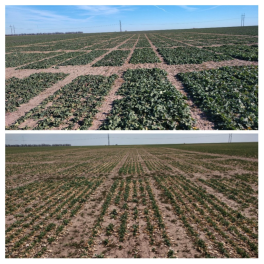 The 2021-2022 winter crop season is shaping up to be one to remember for canola growers. From mounting precipitation concerns to rapidly fluctuating temperatures, one would think that the deck is stacked against this year’s winter crops. Low soil moisture made establishment challenging, fortunately, the October rains and warmer temperature allowed later emergence. However, due to drought, the crop jumped into survival mode, meaning it rapidly moved to bolting to attempt to survive the current dry conditions. Only time will tell how well the current canola crop will yield. We’ve seen the resiliency of canola carry it through challenging weather conditions before, and one significant rainfall event can change the narrative rather quickly.

While drought has deepened across the Plains, persistent winds have also been an issue. Measuring the drought is difficult and measuring wind can be even more challenging. Wind is often hard to reasonably sample because small changes in terrain/obstacles significantly influence measurements. However, we can all agree it has FELT windy but how windy has it been? This article summarizes the wind climatology, wind magnitude, and all about the wind gusts. One third of the 57 tower stations in Kansas have measured gusts over 60 mph since March 1st. This is the strong wind that many are referencing and that is responsible for much of the blowing dust and wildfire concerns.