The 2021-22 winter wheat crop conditions has deteriorated considerably during the last few months, and the latest USDA-NASS report suggests that only around 30% of the Kansas wheat crop is in good or excellent. The increased water demand led by greater fall biomass production was, unfortunately, met with below average precipitation during the late fall and winter – especially in western Kansas, leading the crop to experience early signs of drought stress in that portion of the state. While the crop in central Kansas is still mostly not undergoing severe drought stress, the recent increase in biomass as the crop goes into reproductive development will be accompanied by an increase in crop water demand; thus, more precipitation will be needed shortly to avoid yield losses due to drought. 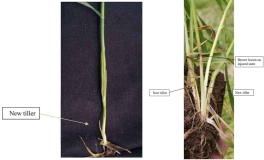 Injury symptoms from freeze damage to wheat: what to look for? 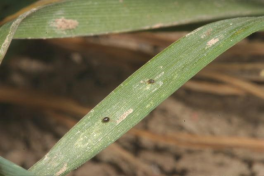 Reports of brown wheat mite outbreaks have come in from southwest and northwest Kansas in the last two weeks. Brown wheat mite is a sporadic pest of wheat in western Kansas but can also become problematic in eastern Kansas during dry years. Typically, continuous wheat faces a higher risk of damage from this pest and injury can be confused with drought stress. 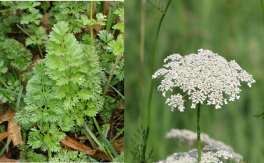 Poison hemlock was first introduced to the US from Europe during the 1800s. It has successfully invaded most of the United States and is typically found growing in frequently disturbed areas with moist soil, such as pasture and field edges, banks of streams, and in flood plains. Wild carrot is native to Eurasia. It is thought to have been brought to the US by early colonists and is now common in the eastern half of the United States. It can generally be found in pastures, roadsides, and woodland openings and edges. It grows best in full sunlight, as plants growing in heavy shade will act as annual plants. It is rarely found in cultivated or heavily managed fields. 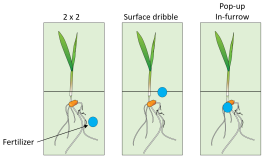 Starter fertilizer and nitrogen placement and rate considerations for Corn

Starter fertilizer is typically considered as the placement of a small rate of fertilizer, usually nitrogen (N) and phosphorus (P), near the seed at planting time. This fertilizer is intended to "jump start" growth in the spring, and it is not unusual for a producer to see an early-season growth response to starter fertilizer application. But some producers might also consider using this opportunity to apply higher rates of fertilizer that can supply most of the N and P needs for the corn crop. 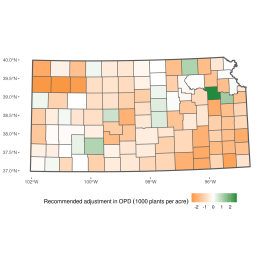 As planting season for corn is around the corner, producers need to determine their corn seeding rates. Plant density needs to be determined seasonally, depending on the expected growing conditions. In rainy years, a producer may increase the target plant density and obtain an increase in profit provided there is sufficient nitrogen fertilization. Under dry conditions, farmers should consider cutting back on plant density. This applies primarily to dryland corn production.

This 2022 season, soybean acreage projections in Kansas are up. To maximize yields, there are some key practices we cannot overlook. This article presents some tips on selecting the best i) planting date and ii) maturity group across Kansas. After considering the effects of genetic yield potential and the environment, planting date is one of the primary management practices under the farmer’s control that can highly influence soybean yields.