During the spring, we often receive questions about poison hemlock (Canium maculatum). This plant is in the carrot family and can be confused with related plants, such as wild carrot (Daucus carota). However, telling the two species apart is critical. As the name implies, poison hemlock is toxic to both livestock and humans. In fact, poison hemlock is believed to have been the plant used to kill the philosopher Socrates in 399 BC. The toxic effects are caused by chemicals called alkaloids that affect reproductive and nervous systems. If poison hemlock is ingested, symptoms including nervousness, trembling, weakness, poor coordination, pupil dilation, slow and weak heartbeat, coma, and respiratory paralysis develop within two hours. In addition, poison hemlock can cause fetal deformation and the alkaloids can be passed through milk.

Poison hemlock and wild carrot are both biennial plants that reproduce by seeds. which can be dispersed by wind or animals.

Poison hemlock was first introduced to the US from Europe during the 1800s. It has successfully invaded most of the United States and is typically found growing in frequently disturbed areas with moist soil, such as pasture and field edges, banks of streams, and in flood plains. It can also invade pastures and alfalfa fields. Livestock may consume poison hemlock in areas where it is the only green foliage or available in large quantities.

Wild carrot is native to Eurasia. It is thought to have been brought to the US by early colonists and is now common in the eastern half of the United States. It can generally be found in pastures, roadsides, and woodland openings and edges. It grows best in full sunlight, as plants growing in heavy shade will act as annual plants. It is rarely found in cultivated or heavily managed fields. The sap of wild carrot can cause skin irritation.

Poison hemlock grows as a deep-rooted rosette during its first year. Rosette leaves range from 8 to 16 inches in length and can grow up to 4 inches wide. Leaves have a triangular shape, are lobed and fern-like, though not as fine and lacy as wild carrot (Figure 1, left). They are alternately arranged on the stem. Once bolted, stems can be 3 to 10 feet tall and are often branched. The stems are hairless, purple spotted, and hollow except at the nodes where the leaves attach (Figure 1, center). Poison hemlock flowers during May to July. Small, white flowers are arranged in an umbrella-shaped inflorescence that is composed of several bunches of flowers on their own stems that extend from the main stem (Figure 1, right). Poison hemlock also produces a musty odor.

Wild carrot, also called Queen Anne’s lace or bird’s nest, is a deep-rooted rosette during its first year.  While in the rosette, leaves can range from 2 to 16 inches in length. Leaves are fine, lacy and pinnately lobed. The petiole is generally longer than the leaf blade and has stiff hairs (Figure 2, left). The general shape of wild carrot leaves is more linear, as compared to poison hemlock leaves which are more triangular. Once bolted, the solitary stem can range from 1 to 5 ft tall and can sometimes branch. The stem is hollow and ridged, sometimes with bristly hairs and is often reddish purple. Leaves are directly attached to the stem and are alternately arranged. Wild carrot generally blooms from April to July. Up to 1,000 small flowers can be found in an umbel inflorescence with a flat top (Figure 2, right). The first flower to bloom, in the center of the inflorescence is generally dark purple. When the plant matures the inflorescence turns in on itself and looks like a bird’s nest. 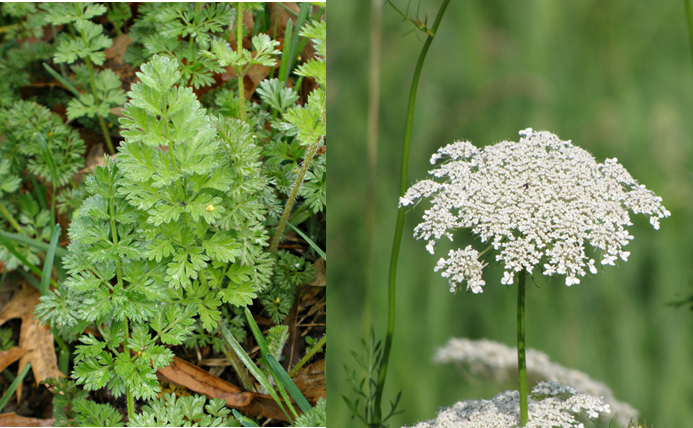 Distinguishing features of poison hemlock and wild carrot are summarized in Table 1.

Poison hemlock and wild carrot are relatively easy to control. Mechanical control methods such as mowing and cultivation can be effective. However, mowing may need to be repeated several times. Repeated mowing of bolted plants may result in reduce carbohydrate storage, which may stop seed production. In addition, wild carrot can be suppressed by grazing with livestock. Small infestation maybe contained by digging up plants.