As the 2019 wheat crop progresses across Kansas, this article summarizes and highlights current conditions and potential issues.

Precipitation was light for the week ending April 23, 2019. Total precipitation during the period ranged from less than a tenth of an inch in southwest Kansas to over 3 inches in a band from south central to east central Kansas (Figure 1, upper panel). These totals ranged from less than 5 percent of normal in southwest Kansas to almost 5 times the normal in portions of south central Kansas (Figure 1, lower panel). The entire state received some amount of precipitation, which was beneficial for the winter wheat crop in some areas, while in other areas that already had enough moisture, the additional moisture likely favored disease development. 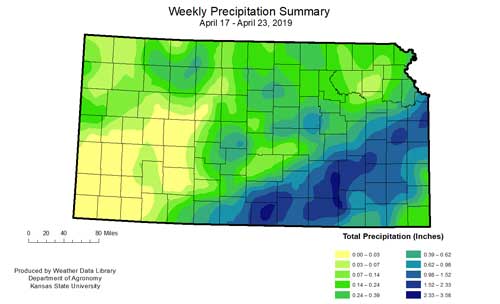 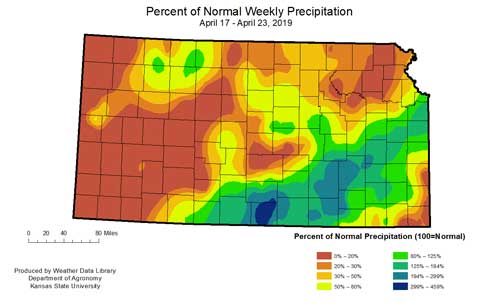 Mean air temperatures during the April 17-April 23 period ranged from approximately 56 degrees F in northwest Kansas, to close to 62 degrees F in southeast Kansas (Figure 2). This is about 5 to 6 degrees warmer-than-normal mean temperatures for the same period in the northern tier of counties and 4 to 5 degrees higher than average in the southern portions of Kansas. 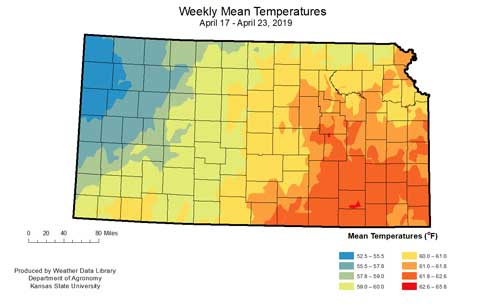 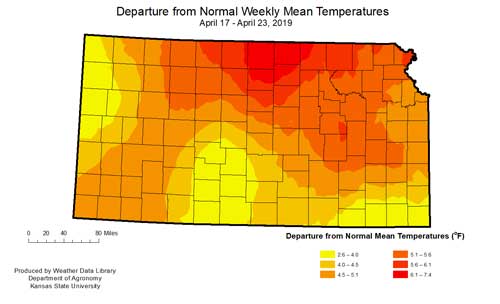 Wheat development this year is very dependent on planting date. Due to excessive moisture during the month of October 2018, the Kansas wheat crop was mostly planted either before October 5th or after October 20th. The early-planted crop is moving along fairly well, and many fields in the south central portion of the state are at the flag leaf emergence stage of development. As means of comparison, late-planted fields in the same region are still at the jointing stage of development. Meanwhile, in regions that were cooler throughout the growing season, such as north central Kansas, early-planted fields are reaching the jointing stages of development, while late-planted fields have not yet jointed. The late-planted fields are behind in development, and have much smaller plants than normal. In other words, a field might look like it is still tillering from the road, but upon close inspection, a joint might already be found.

Potential consequences of a relatively late maturity are unknown. Past experience suggests that the late-maturing fields may be subject to greater moisture stress, heat stress, or disease severity during grain fill.

Due to the moisture that accumulated during the fall and winter, most of the state should have decent levels of subsoil moisture. However, due to the limited precipitation in the last few weeks, the topsoil might be drying out.

A dry topsoil can affect both the early- and the late-planted crops differently. For the early-planted crop, the issue relates to water use. In general, crop water use increases with biomass in the spring. Daily water use of wheat can approach 0.25 inches per day between the jointing and boot stages of development, and as much as 0.3 inches per day during anthesis and early grain fill. Thus, a crop with more biomass requires more water. For the late-planted crop, the amount of growth we see above ground often reflects what is happening with root development below the soil surface. The root system of the late-maturing fields is likely shallow and may have limited access to subsoil moisture. Even with sufficient subsoil moisture, the crop might still go through water stress because the roots simply cannot access the lower portions of the soil profile.  Moisture stress during early-to-late stem elongation generally results in tiller abortion and reduced head size.

Due to the extended cool temperatures and moist conditions last fall, there are more reports of soilborne mosaic virus across the state than normal (Figure 3). Symptoms of soilborne mosaic include areas of fields with yellow discoloration and stunting. Individual leaves appear yellow or light green with darker green islands. While the yellowing often disappears as temperatures increase, the stunting will likely remain. 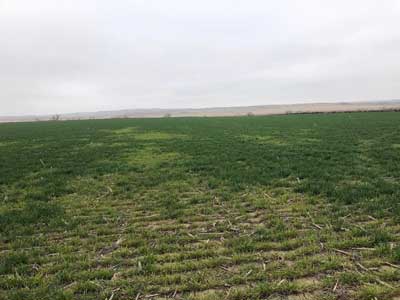 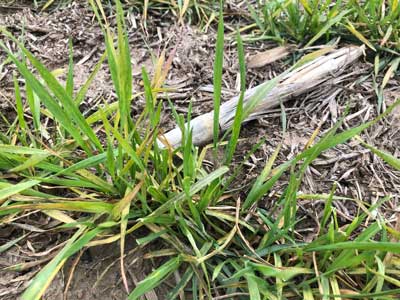 Leaf rust and stripe rust are also present in the state. Survey work this week indicates that these diseases are more common in the south central region, which received more rainfall in early April (Figure 4).  With the crop at flag leaf emergence in this region, growers should be checking fields for signs of disease. Seed production fields and fields planted with varieties susceptible to leaf rust and stripe rust are a top priority for scouting. Fields with a good yield potential and leaf rust or stripe rust established in the mid-canopy will likely benefit most from a fungicide application.  Recent issues of the eUpdate have articles targeted at fungicide application.