Much warmer-than-normal temperatures during September, combined with windy conditions, rapidly worsened drought conditions across Kansas. Thankfully, a precipitation event occurred at the end of the month which provided much needed moisture across the state and particularly wheat growing areas (Figure 1). Consequently, topsoil moisture at the 4-inch depth has rebounded in places where the heaviest rains occurred (50% saturated and higher), however many areas are still dry (less than 50%) (Figure 2). 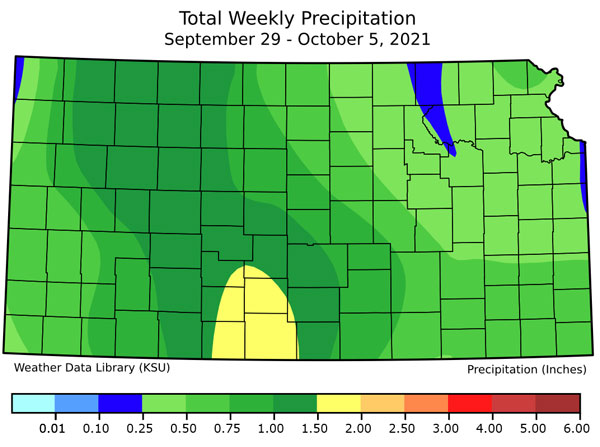 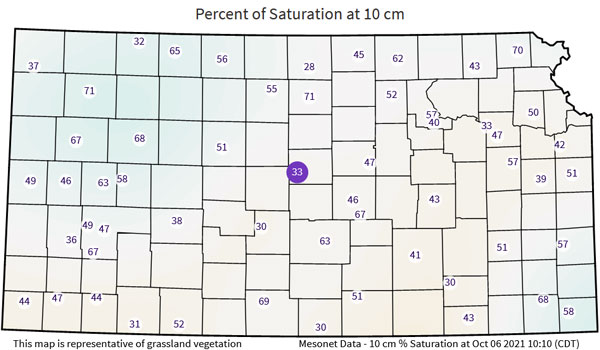 The next 7-day precipitation forecast for Kansas indicates that rainfall is expected to be focused in eastern Kansas. Highest amounts are expected to reach the 1.00 – 1.25 inches in the southeast (Figure 3). The 8- to 14-day forecast (Figure 4) favors increased probability of above-normal precipitation, especially for east and central Kansas. Though highest amounts will vary with thunderstorm activity, conditions appear favorable for wheat except for western Kansas. 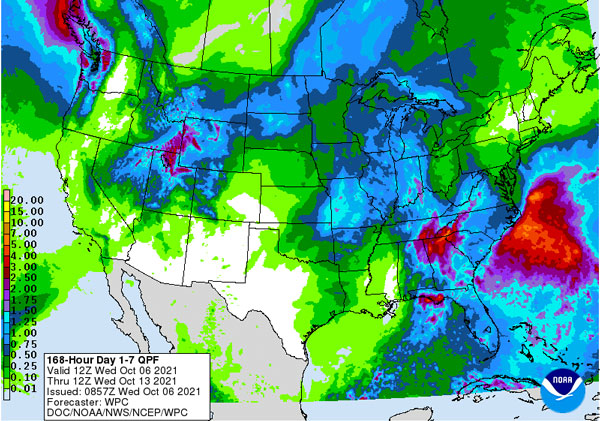 Figure 3. Weekly precipitation forecast as of October 5, 2021 by the National Weather Service Weather Prediction Center (NOAA). Precipitation probabilities in Kansas for the next 7 days range from 0.00 to 1+ inches. 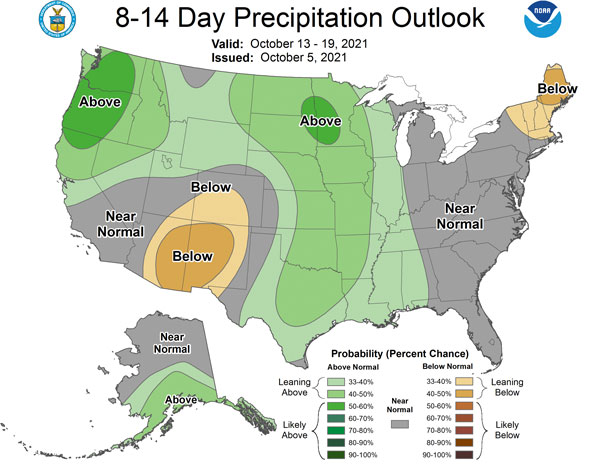 Figure 4. The 8- to 14-day precipitation forecast as of October 4, 2021 by the National Weather Service Weather Prediction Center (NOAA).

Wait for rain or continue with planting progress?

The current wheat-planted acreage in Kansas, according to the USDA-NASS crop progress report, was 42% as of October 4, 2021. While this is near the 5-year average of 41%, only 16% of the crop has emerged so far (which is behind the 5-year term average of 19%).

The biggest question in growers’ minds at the moment is: Should I continue planting the crop, or should I wait for rain?

Each grower must consider his or her own situation to take this decision, as the rainfall distribution shown in Figure 1 is interpolated across weather stations and might not represent the reality for a few fields that were far from a given weather station. Advantages of progressing with crop planting now is to take advantage of the available moisture where recent rainfall occurred, and also a good seed distribution in dryer soils where rainfall did not occur. In this situation, growers also have the opportunity to plant a large number of acres before it rains. However, if no rain occurs in the near future, the crop might not emerge until it rains later in the fall or even winter, delaying the “effective planting date” to whenever the rain actually occurs. Thus, at this point in time, growers should start to treat these fields as if they were sowing late, where increases in seeding rate and applications of in-furrow starter fertilizer are recommended. These might also be situations in which seed treatments can be beneficial, as the seeds will be exposed to weather in the fields for several days.

The worst-case scenario would include planting into a limited amount of moisture, just enough for emergence of some plants but not enough to maintain these seedlings after they emerge. This situation can result in uneven stands and high stand variability within the field (Figure 5), or even crop failure. Thus, if good moisture cannot be reached in about the top 1.5-2 inches of soil, growers would likely be better off sowing it shallower and waiting for rain. The description above is true for north-central and most of western Kansas, where the upcoming rainfall chances are lower than in other parts of the state.

In south central and eastern Kansas, where the rain forecast is more favorable, growers could still maintain their original seeding rate for optimal sowing time. 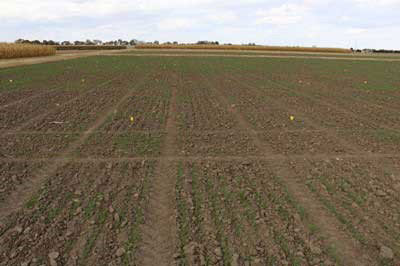