For most of Kansas, excess moisture has been the theme for the first half of May.  Many locations, particularly in the eastern third of the state, have already received more than the total normal precipitation for May.

The outlook for June calls for continuation of that pattern, with an increased chance of wetter-than-normal conditions across the state. The signal is strongest in the western third and weakest in the east.  The temperature outlook favors a cooler-than-normal pattern across the entire Central Plains. A normal or slightly below-normal precipitation pattern for June would be favorable in the eastern divisions where saturated soils continue to present problems. However, cool temperatures would slow the normal drying pattern. While cooler temperatures would favor grain fill in the fall-planted crops, this would also increase disease pressure. In addition, flooding could also be an issue due to the fact that streams, ponds, and reservoirs are full. 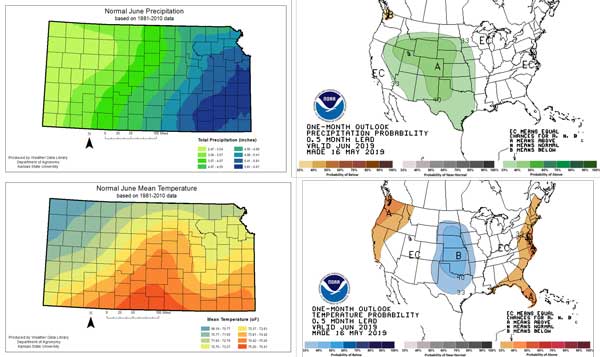 As the outlook is extended to the full summer season, the temperature outlook continues to favor cooler-than-normal temperatures across the state. However, this does not indicate how those temperatures might be distributed. An untimely period of warm temperatures at flowering/pollination could still create problems.  An additional issue is that root development on spring-seeded crops is likely to be compromised by the cool, wet soils that have dominated the spring. This poor root development will make the crops more vulnerable to a relatively short dry period.

There is a slight chance for above-normal precipitation state-wide for the period. Again, this does not indicate the distribution pattern.  A slightly drier-than-normal summer, with well distributed rains would be much more beneficial than a continuation of the rainy pattern. Planting has already been delayed, as well as cutting of alfalfa. The western third of the state has drier soil at the surface and would benefit more from a normal precipitation pattern.

An El Niño has been officially declared, but it continues to be weak.  An El Niño generally favors wetter-than-normal conditions in the Central Plains. 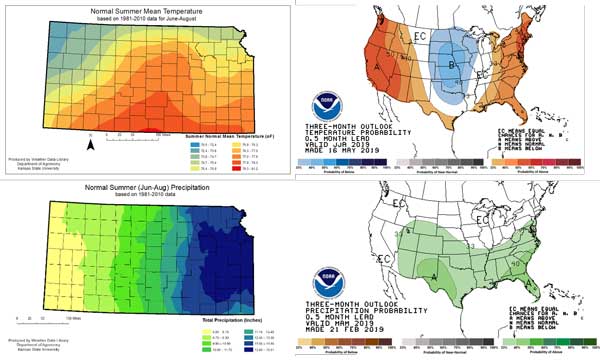