In this report, we take a final look at the heat of 2022 by the numbers. Specifically, we look at the occurrence of highs of at least 90° and 100°F at 40 sites across Kansas, an update to an earlier report. The counts presented in this article are current as of October 9. While it is still possible that these counts could change slightly if there is a period of unseasonably hot weather between now and the end of the year, the numbers should not change much from the totals listed in Table 1.

As of September 30, this year ranks as the 30th warmest out of the last 128 years, dating back to 1895. Within that period, June 1 to August 31, normally the hottest part of any given year, 2022 ranks as 18th warmest. Given these high rankings, it should be no surprise that there were more 90°-days than normal at all 40 locations. While there were no new records for the most 90°-days in a year, the 2022 counts were top 10 at almost half of the sites, including all of the northwest, southwest, and south central Kansas sites selected for this report. Dodge City came within one of tying their record of 102 90°-days. Healy, Ashland and Syracuse also had their 2nd highest number of 90°-days on record, but in all three cases, those counts were at least half a dozen shy of the all-time marks. Still, Ashland’s count of 113 days of 90°-days was the highest of any location in the state, four ahead of second place Liberal with 109 days. Russell, Hutchinson, Wichita, and Chanute all finished in the top 5. Northeast Kansas was the only region where none of the sites’ counts were in the top 10.

At the 100° threshold, eleven of the 40 sites had counts in the top 10 all-time for their respective locations. Healy once again came in 2nd; their count of 47 days was one shy of their record set in 2012, but was the highest count in 2022 for any site in Kansas. Other locations where the counts of 100°-days ranked in the top 10 include Colby, Oakley, Ashland, and Winfield. Lawrence failed to reach 100°; their highest reading of 2022 was 98° on July 15, 21 and 23. Washington, Horton and Garnett had just one day with a high at or above 100°. Unlike the 90° counts, six of the 40 sites had fewer 100°-days than normal. All but one of those six sites are in eastern Kansas.

Table 1. Statistics for the counts of high temperatures at or above 90° and 100°. Average counts for each threshold are based on the period 1991-2020. Maximum annual count and ranks are based on the full period of record. Rank column contains two numbers: 2022’s rank followed by the number of years in the period of record. BOLD entries in the rank columns indicate where 2022 ranks in the top 20% of all years.

Will the high temperatures continue through the fall?

Given such high counts of hot weather days, should we expect a warm fall as well? The latest outlook for the last three months of 2022 (Figure 1) calls for above-normal temperatures. Even with some chilly mornings that brought frost to parts of northwest and northeast Kansas, October is already running above normal; the statewide departure from normal for the first 10 days of October is +1.8°. Much like a football game, there is still a lot of time left on the clock in the fourth quarter, so the outcome may differ from where things stand now, but warm weather appears to be the team to beat at this point. 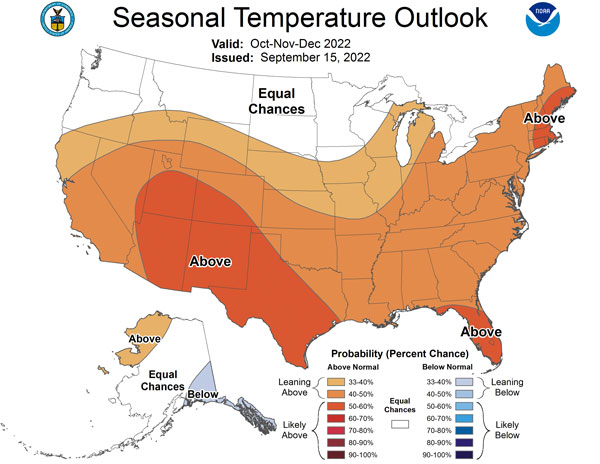