The latest USDA-National Agricultural Statistics Service crop progress and condition report released September 21 classified 45% of the soybean crop to be in good or excellent condition. Overall, 48% of all soybeans in Kansas are dropping leaves, well ahead of 23% last year and a five-year average of 34%.

Current conditions have been cooler-than-average and temperatures are expected to continue to trend cooler than normal during the next 8- to 14-day period. The current October outlook does suggest an increased chance for warmer-than-normal conditions to return for the rest of the month. Drying may still take a significant amount of time, as typical October temperatures are much cooler than September. There is a strong chance for drier-than-normal conditions for both the short term (6-10 days), and October as a whole. Keep in mind that there is a significant drop in normal rainfall amounts from September to October as we move into a typically drier part of the year. 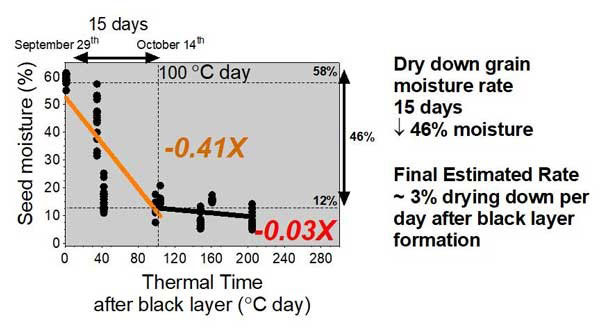 For more information on dry down rates for corn, see the eUpdate article, “Rate of dry down in corn before harvest”, in the September 4, 2020 issue.