There can be considerable environmental variation across the state during the growing season of grain sorghum, with a high probability of drought after flowering when moving toward the west. Tailoring the right management strategy to every site is critical to increase productivity and reduce the impact of abiotic stressors (Figure 1). The most critical planting practices affecting yields in sorghum are: row spacing, row arrangement, seeding rate/plant population, planting date, and hybrid maturity. 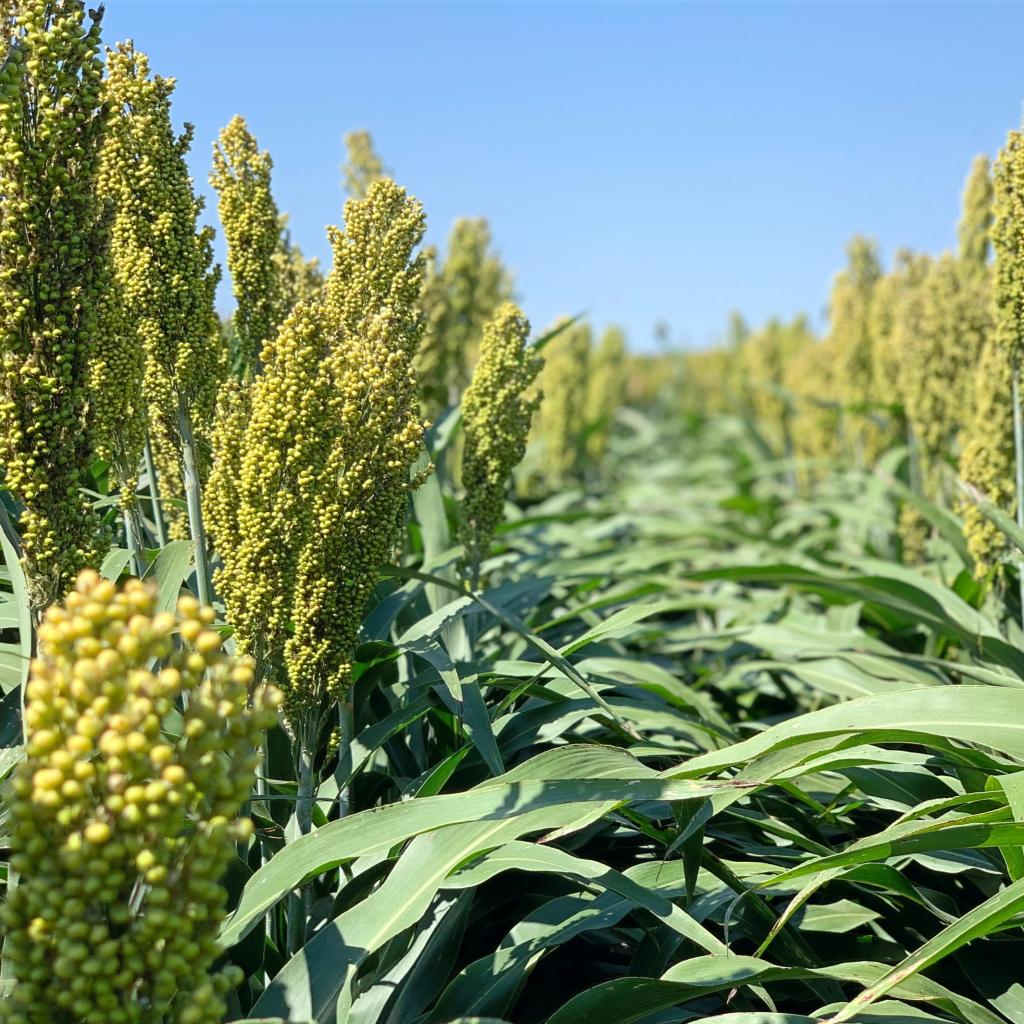 Sorghum population recommendations range from a desired stand of 23,000 to more than 100,000 plants per acre depending on average annual rainfall (Table 1).

Because of sorghum’s ability to respond to the environment, final stands can vary at least 25 percent from the values listed above, depending on expected growing conditions, without significantly affecting yields. Lower seeding rates minimize the risk of crop failure in dry environments. Sorghum can compensate for good growing conditions by adding tillers and adjusting head size, but yields can be reduced in a dry year if populations are too high. For a high-yielding environment (>150 bu/acre), under narrow rows, high plant populations can be a critical factor for improving sorghum yields.

Higher seeding rates also should be used when planting late. Increase rates by 15-20 percent if planting in late-June or later. Late planting will restrict the amount of time that sorghum plants will have in the season for producing productive tillers, thus decreasing the plants’ ability to compensate for inadequate stands.

Having more than the recommended number of plants per acre results in fewer fertile and productive tillers and thinner stems, which will reduce yield in the drier environments and increase susceptibility to drought. On the other side, thin stands can compensate for better-than-expected growing conditions somewhat by producing more and/or larger heads. However, under high-yielding environments, a higher final plant population will be needed to increase yields as much as possible (Table 1).

A summary of research data performed in the last several years has confirmed that the optimum planting date for maximizing yields will be around early June (Figure 2). Still, the decision related to the optimum planting date should be timed so plants have the best possible chance of avoiding hot, dry weather at the flowering stage, but can still have sufficient time to mature before the first frost. 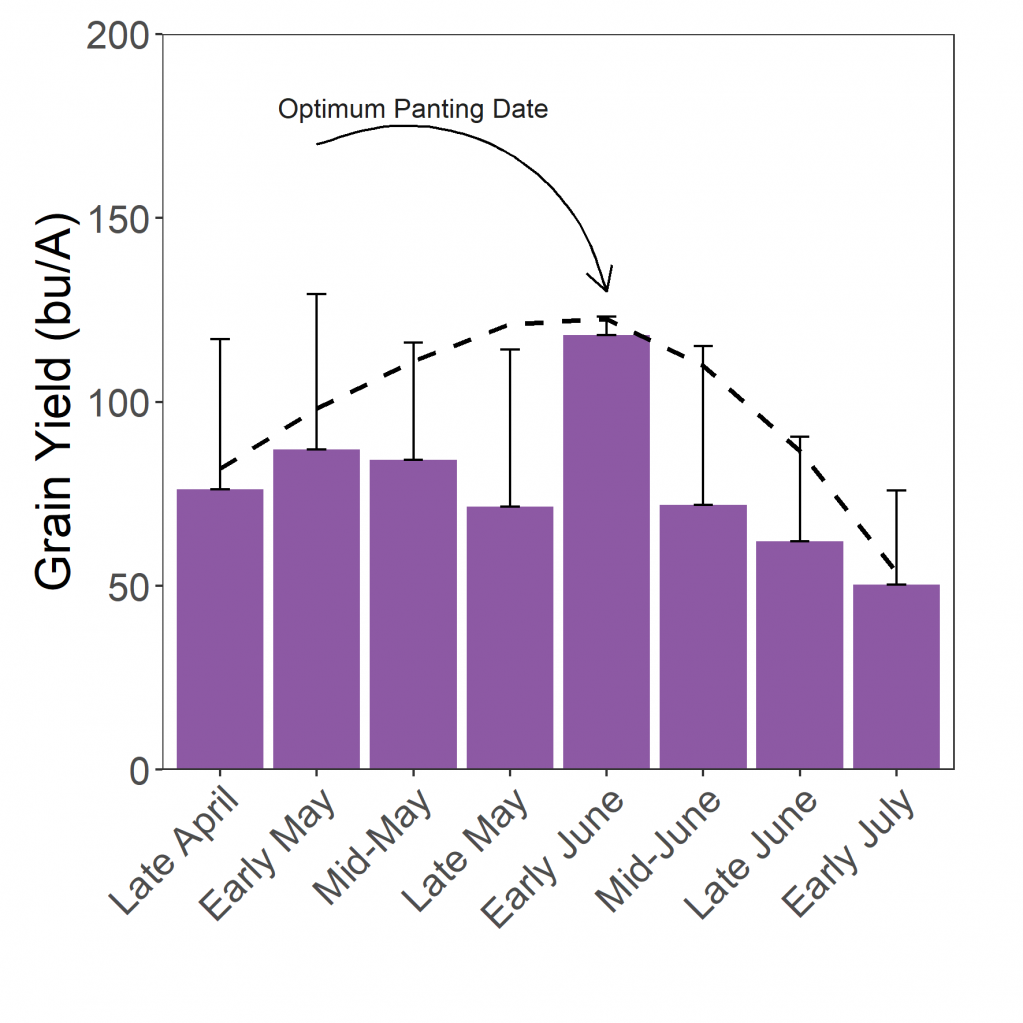 Planting date has some effect on seeding rates. Sorghum will tiller more readily in cool temperatures and less under warm conditions. As a result, later plantings in warmer weather should be on the high side of the recommended range of seeding rates for each environment since there will be less tillering. The potential for greater tillering with earlier planting dates makes sorghum yields more stable when planted in May and early June compared to late June or July plantings.

Seed placement is also a critical factor when planting sorghum. Optimum seed placement for sorghum is about 1-2 inches deep. Shallower or deeper planting depths can affect the time between planting and emergence, affecting early-season plant uniformity.

The other factor that can influence yield is row spacing. A response to narrow row spacing is expected under superior growing environments, when water is a non-limiting factor. Narrow rows increase early light interception, provide faster canopy closure, reduce evaporation losses, can improve suppression of late-emerging weeds, and maximize yields.

The comparison between wide (30-inch) vs. narrow (15-inch) row spacing shows an overall yield benefit of 4 bushels per acre with narrow rows. In addition, narrow rows out-yielded wide rows in 71 percent of all observations evaluated (Figure 3). 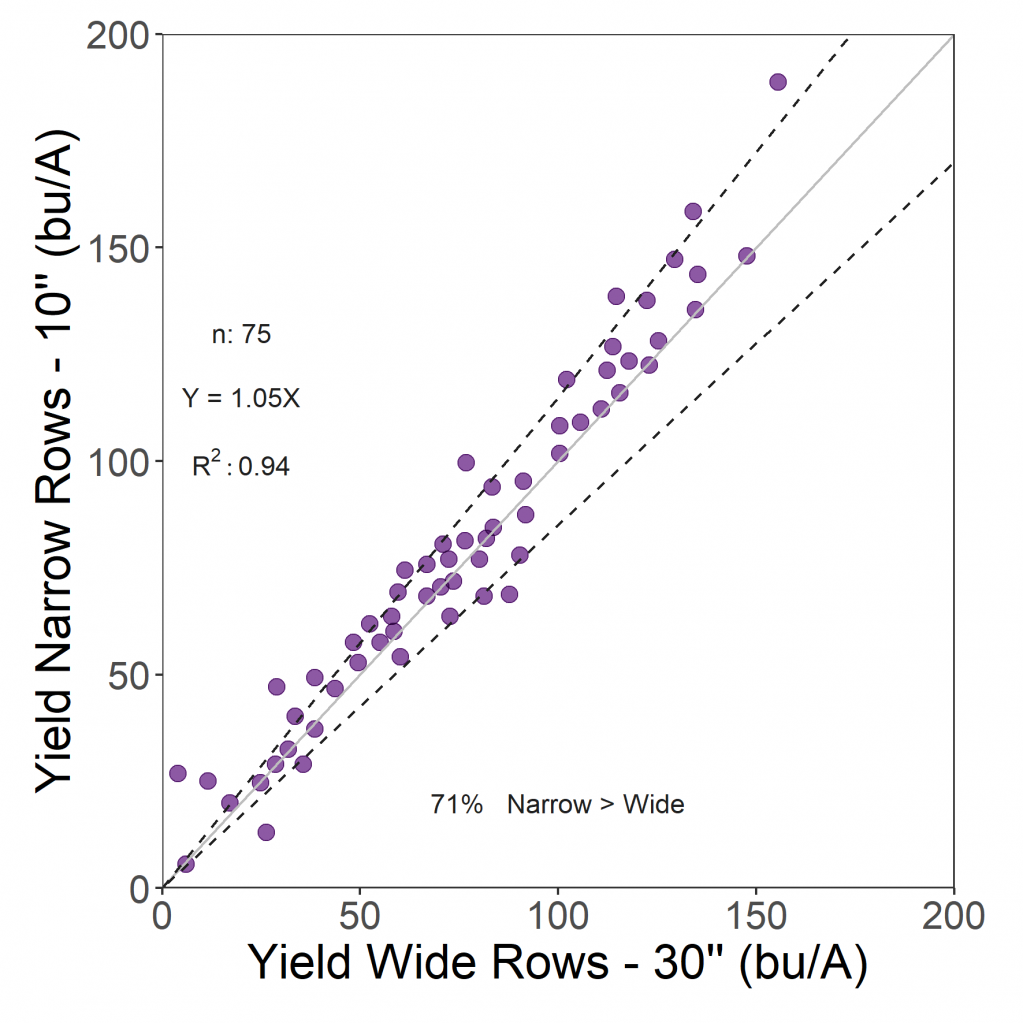 Figure 3. Yield in narrow rows versus yield in wide rows. From a total number of 75 observations, 71% had a greater yield in narrow as compared to wide row spacing. Partial data presented From Sorghum: State of the Art and Future Perspectives, Agronomy Monographs 58, chapter “Genotype × Environment × Management Interactions: US Sorghum Cropping Systems” doi:10.2134/agronmonogr58.2014.0067, Ciampitti and Prasad (Eds).

A more consistent response to narrow rows was documented when yields were above 70 bushels per acre, with a greater chance of having higher yields when using narrow rows, but the response is not always consistent. Under low-yielding environments, conventional (30-inch) wide row spacing is the best alternative.

Should populations be adjusted with narrow rows?

Research results indicate that the population producing the greatest yield doesn’t change with different row spacing, but the magnitude of response to population potentially can be greater with narrower row spacing in high-yielding environments.

Should row spacing be adjusted for planting dates?

The selection of sorghum hybrids should be based not only on maturity, but also on other traits such as resistance to pests, stalk strength, head exsertion, seeding vigor, and overall performance. The selection of a sorghum hybrid based on its maturity should be strictly related to the planting date, expected duration of the growing season, and the probability the hybrid will mature before the first freeze event. Shorter-season hybrids might be a better fit for late planting dates (mid-June to July depending on the regions); while a longer-season hybrid is recommended when planting time is early and the duration of the growing season is maximized. The goal is to plant a hybrid maturity at each particular site/environment (weather and soil type) so the plants can bloom in favorable conditions, and have adequate grain fill duration before the first fall freeze occurs.

Suggested Resources for sorghum crop from K-State Research and Extension