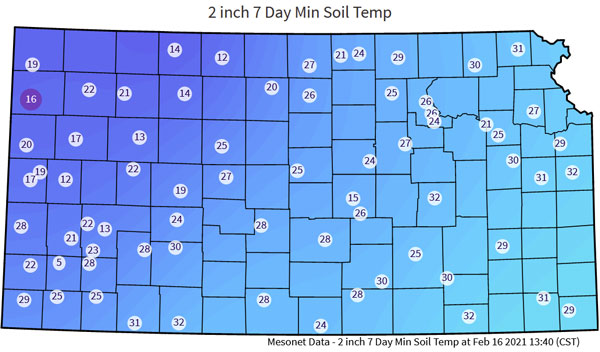 There are multiple, interacting factors that control soil temperature fluctuations. Conduction is the predominant mode of heat transfer in soils. Conduction is how the handle of an iron skillet gets hot when on the stove. Conduction is largely controlled by two other soil properties: heat capacity and thermal conductivity. Simply put, heat capacity is the amount of energy required to raise the temperature of a substance (e.g. water or soil particles) by 1 degree Celsius. Soil particles have a low heat capacity and water’s heat capacity is relatively high. This mean that dry soils are more easily heated or cooled than wetter soils. Dry soils also tend to exhibit larger temperature swings as compared to wetter soils. Soils of different textures (sandy vs. clayey) have similar heat capacities when dry, but because of the strong effect of soil texture on soil water storage, there is a strong indirect effect of soil textural class on the heat capacity via its influence on soil moisture status. In short, soil water is the major driver in controlling heat capacity.

The Kansas Mesonet focuses on obtaining soil temperature measurements using a standardized approach including site selection, sensors, sensing depth, and installation procedures. As a result, all sensors are located under native grass cover and mowed twice a year. With few exceptions, like where grass cover has been nearly impossible to get established, all soil temperature sensors are positioned about eight feet to the south of the main weather station.

Assuming similar soil moisture conditions, sensors under bare soil typically exhibit greater soil temperatures during the daytime and colder temperatures during the nighttime resulting in greater temperature fluctuations compared to sensors under grass or residue cover. Also, an even layer of snow can insulate the ground from the frigid air temperatures. Snow is one of the best insulating materials in nature since it contains a large fraction of trapped air space that creates a high resistance to heat flow.

A crop residue study was conducted near Moscow, KS in 2009-2010 by graduate student Nick Ihde and is summarized in Figure 2. Corn residue was either left in the field (retained) or chopped, raked, and baled (removed). Soil temperature measurements were recorded at the 2-inch soil depth and the soil type was a Bigbow fine sandy loam. Of note, soil moisture values between the retained and removed plots were only different from each other 8 days out of 120 days. In other words, soil moisture content was nearly equal (data not shown). Also, soil texture and soil organic matter content were the same in all plots. The take home message from the data shown in Figure 2 is that the crop residue helped insulate the soil from fluctuations in air temperature. Where residue was removed, the soil cooled and warmed more during the winter. 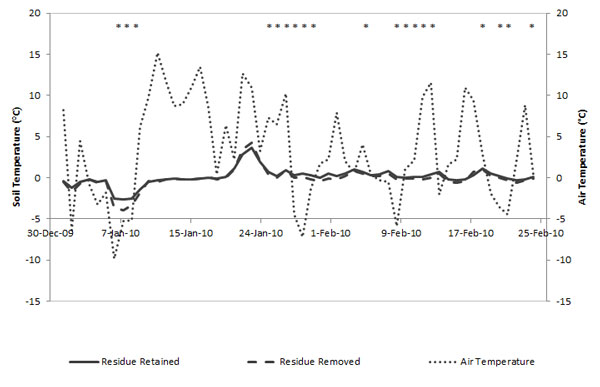 Figure 2. Crop residue insulates soils from fluctuations in air temperature. Where crop residue is present, the soil cools and warms slower. Data collected at 5 cm (2 inch) soil depth in a Bigbow fine sandy loam soil near Moscow, KS in the winter of 2009-2010 by Nick Ihde, graduate student in Agronomy.

Kansas is fortunate enough to have a soil temperature database back to 1987 for twelve weather stations. In context of the last 30+ years, the recent cold stretch set new record lows for the last three days (February 13, 14, and 15). Both Colby (Figure 3) and Hutchinson 10SW (Figure 4) experienced similar conditions due to the widespread nature of this event. Colby’s average soil temperatures for the latter half of December and most of January hover around the freezing mark. This is the result of the above mentioned conditions making 32°F such a hard threshold to overcome. Hutchinson’s average soil temperatures are just above the freezing mark. In addition, neither station was under grass the entire thirty years. Some of the early 1990s saw either bare soil or sparse grass cover. Therefore, many of the lowest values in this climatology may have a cold bias. That reinforces just how impactful the recent cold soil temperatures and how rare the cold outbreak was relative to recent history.

At both Hutchinson and Colby, the increase in temperature and solar radiation going into late February and early March begin the normal trend towards warmer conditions. By this time next month, conditions begin to approach the 50°F mark in southern Kansas and the planting window begins to open. Thankfully, forecast outlooks are calling for warmer-than-normal temperatures going into March which should help to avoid another catastrophic cold snap.

Be sure to monitor soil temperatures as spring approaches and thoughts turn to planting summer row crops. You can access the Mesonet soil temperature page at: https://mesonet.k-state.edu/agriculture/soiltemp/