As wheat growers evaluate their wheat stand, some may be considering replanting fields yet this fall. The potential causes of poor or uneven emergence or stand establishment are many and may differ from field to field. The fall of 2022 has been challenging for winter wheat establishment in Kansas and in the US southern Great Plains. Some regions received precipitation in September and growers who took advantage of this moisture generally attained good stand establishment. These growers are now likely concerned with the drought conditions that followed planting as the wheat plants start to show symptoms of drought stress.

For growers that did not plant right after the precipitation – perhaps because it was still too early for their region – fields may be showing some scattered emergence as seeds may have reached moisture in parts of the field but not in other parts. These growers may be considering the replant their crop. If dry soils are the cause of the problem, replanting will not bring many benefits unless the seed has partially germinated and perished before emerging. It is very important to dig into the soil and evaluate the seed to determine the cause of poor emergence. Wheat seeds may still be germinating and emergence may occur in the next few days, depending on temperatures. Thus, if seed are still hard and viable, or if germination started to occur recently and there is a very short coleoptile emerging from the seed (Figure 1), the best advice is to leave the field alone. 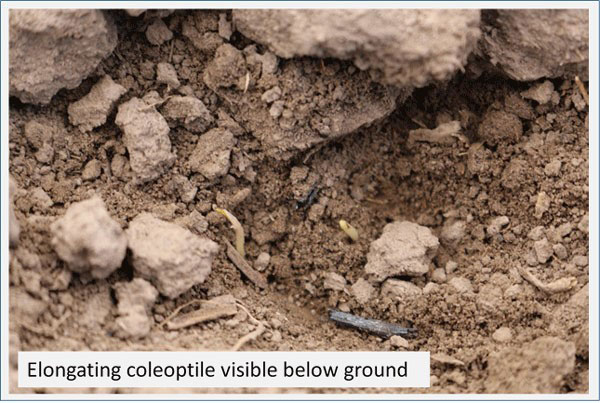 When deciding whether to replant wheat fields it is helpful to consider these factors: stand uniformity, percent stand compared to the target stand, replanting date, weed control, and insurance cutoff date.

In fields in which topsoil moisture was variable at time of planting, some seeds might have germinated and emerged where soil moisture was sufficient, while others might have started the germination process but perished where soil moisture was too low, while others might not have started the germination process at all. This will cause poor wheat emergence across the field, with sometimes recognizable field patterns associated with the moisture distribution in the soil. In this case, stands might be relatively uniform in poorer-drained areas where moisture might have accumulated, but non-existent in better-drained areas, leading to a high within-field variability. In this case, growers should check for seed viability in areas with poor emergence. If the seed is still viable, then the field should be left alone. If the seeds imbibed water, started to germinate but perished, then these portions of the field should have top-priority for replanting. If a stand is sparse in areas that already emerged, producers should also consider replanting these areas with lower seeding rates to bring final population closer to the desired stand, as discussed below.

Percent stand compared to the goal

In areas with suboptimal and thinner stands than desired, counting the number of emerged plants per row foot and comparing the observed stand to target populations (Table 1) is a good place to start.

The target number of plants per row foot (Table 1) is influenced by seeding rate, seed size, and row spacing, and considering 80% emergence. If seed size is not known, 14,000 to 16,000 seeds per pound can be used for most wheat varieties in Kansas, except those with rather large or small kernels. To determine the average number of plants per foot of row, several random plant counts across the field should be taken, given a more or less uniform emergence throughout the field. If the average number of plants is about 50 percent or more of normal and the stand is evenly distributed, the recommendation is to keep the stand. Wheat’s tillering ability can greatly compensate for poor stand provided soil fertility is adequate and the weather is favorable. With less than 40 percent of normal stand, the recommendation is to replant the field. If possible, replanting should be done at a 45-degree angle to the original stand to minimize damage to the existing stand.

As of late October, most of the state has passed the optimum sowing date, with the exception of far south-central or southeast Kansas. For portions of the field with no established stand (the entire stand will need to be replanted), producers should plan to increase their seeding rates by 10-15% for every week past the optimum sowing date.

In areas where a partial stand was achieved but for a total of about 50% stand, or parts of the field that did not emerge evenly, or that the seedlings have perished after planting, producers should make the decision about replanting immediately to avoid further compromising the yield potential.

A thin wheat stand can increase the potential for weed and grass infestations. In fields with a history of severe weed problems, the wheat stand should probably be replanted or thickened. If an herbicide application is preferable to replanting, look for herbicides that contain active ingredients such as bromoxynil, chlorsulfuron, dicamba, fluroxypyr, metsulfuron, MCPA, thifensulfron, tribenuron, and others. The 2022 Chemical Weed Control Guide (bookstore.ksre.ksu.edu/pubs/SRP1169.pdf) contains information, including rates, recommended adjuvants wheat growth stages for application, and crop rotation restrictions about these herbicides and others.

Also, keep in mind that an uneven wheat stand will likely influence herbicide timing in the spring due to different staging of the crop within the same field. For example, 2,4-D should only be applied after full tiller and before early boot to avoid either reduced tillering our improper head development.  More-developed plants during the fall often hold the best yield potential; thus, this factor might be considered if a decision needs to be taken between risking some herbicide injury to more developed plants versus those that emerged late in uneven wheat fields.

Finally, some producers might also consider insurance cut-off dates, as they need to ensure their crop is planted prior to this date.

For insurance purposes, crops planted before the final planting dates as specified by the USDA are insured with no reduction in coverage or adjustment to premium. The final plant date is already past for parts of western Kansas, which means that producers replanting after this date will have a reduction in 1% coverage per day until the end of the late-planting period. For wheat, the late-planting period often occurs about 15 days after the final plant date.