Harvested U.S. soybean acres increased from 72 to 89 million acres from 2000 to 2017. A primary driving factor for the growing trend in soybean production is its economic importance due to versatile end uses, serving as an oil seed crop, feed for animals, protein source, and biofuel feedstock.

Seed amino acid composition is one of the main factors determining overall soybean quality, leading to this study of the variation in seed amino acid concentration across the country. This study assessed the spatial association in amino acids concentration for the major U.S. soybean producing regions; and investigated relationships between seed quality indicators.

Data was collected from soybean testing programs in 14 states (Figure 1) from 2012 to 2016. Annual measurements of yield, oil, protein, and amino acid concentrations were all determined for each site. As a part of the overall evaluation, amino acids measured included arginine, cysteine, isoleucine, leucine, lysine, methionine, threonine, tryptophan, and valine. 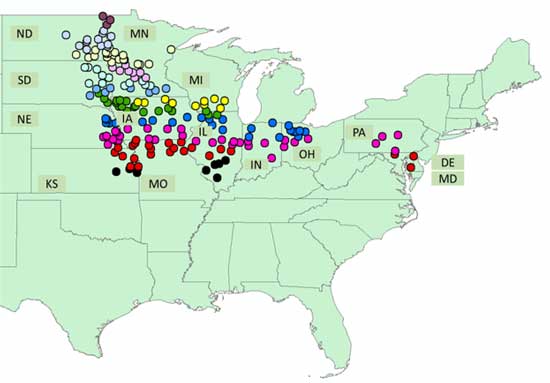 The entire publication with more information detailing the data collected, charts and figures, and results can be found online at: https://www.bookstore.ksre.ksu.edu/pubs/MF3455.pdf

The United Soybean Board (USB Project #1820-152-0108) and K-State Research and Extension provided funding to support this work. The authors appreciate the contribution of FIRST Seed Tests in providing the database presented in this synthesis-analysis.