Climatology of May heat

The average first 90°F reading across the state varies by location. However, most of the state has a 50% chance of breaking that benchmark in May. Typically the first region to reach 90°F is the southwest as noted by Greensburg in Figure 1. Western Kansas, Tribune, is usually the second area to achieve this mark by mid-May. Western Kansas has a much drier climate and therefore can have a large swing of temperatures. In a wetter climate such as Chanute, there is more moisture in the atmosphere with a higher specific heat. Therefore, it takes more energy to warm in the afternoon and thus, the average first 90F occurs later in the year. In addition, the southwest is more likely to incur warm/dry downslope winds from the Rocky Mountain. The southeast observes a more southerly flow which results in persistent Gulf of Mexico moisture and humidity. These respective stations have measured their first 90F as early as March and as late as June. 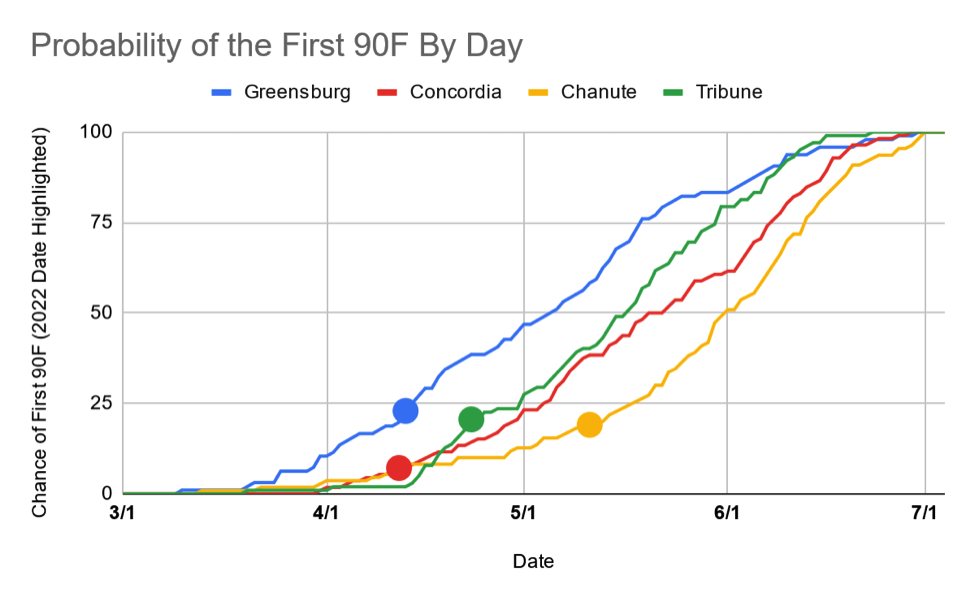 This year, the first 90°F reading occurred much earlier at all locations, falling within the 25% chance of probability. Concordia, Tribune, and Greensburg all observed 90°F in April (12, 23, 13th respectively). Chanute, though occurring almost a month later, still observed a very early first 90°F on the 11th.

The northern latitude of Concordia makes its first 90°F reading very interesting. Over the 112 years of data, there was only a 7% chance of it occurring on/before April 12th. This was likely the result of drought conditions that extended from the southwest northward into north-central Kansas (Figure 2) at that time. During the period of April 10 - May 9th, 38 daily maximum high temperatures have been broken (NCEI). 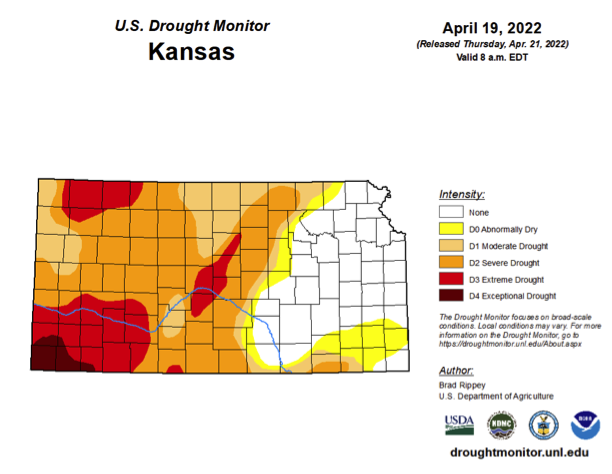 Figure 2. Drought monitor in mid-April which captured the very early first 90°F recorded at many locations in Kansas. (Source: Droughtmonitor.unl.edu)

With the early onset of warmer-than-normal temperatures in the state and continuing drought, May’s early heat wave shouldn’t come as a surprise. The region observed a very progressive and active weather pattern over the first few months of the year. This was accompanied by frequent cold fronts and resulting cooler temperatures. However, over the last week, the weather pattern has become “bogged up” in what meteorologists call a rex block or blocking pattern (Figure 3). This has created a stagnant pattern with persistent south/southwest surface flow for Kansas. While the origins and flows have different moisture quantities, they both contribute to warmer temperatures. 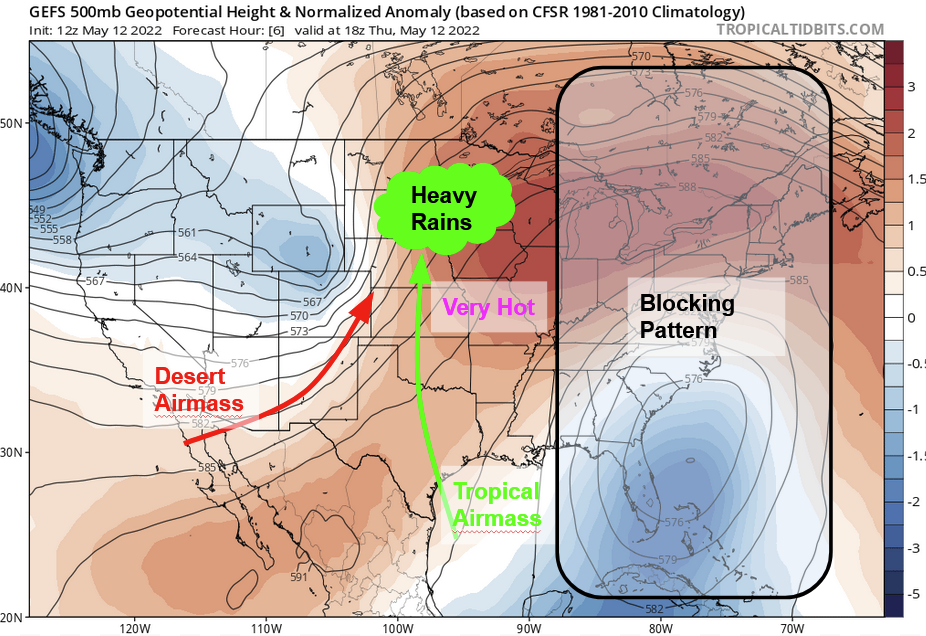 Figure 3. Upper level pattern anomalies with blocking pattern highlighted. Impact descriptions are also included. Tropical moisture has overtaken eastern Kansas, with drier downslope/desert air mass for the west. Both these are leading to very warm conditions in the state. Additionally, this is resulting in heavy rains north of Kansas. (Map Source: Tropicaltidbits.com). 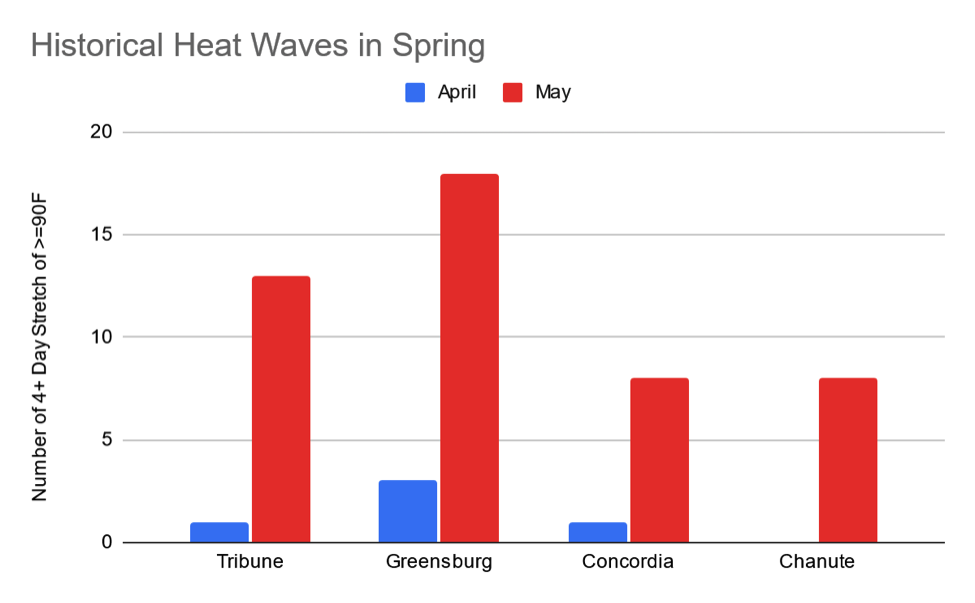 Figure 4. Count of four or more consecutive 90°F days in each station’s record in April and May. (Source: NWS COOP).

The result of these warm conditions have been several consecutive days with daily maximum temperatures of at least 90F at many locations. As of this writing (May 12, 2022), there have been three straight days of 90°F+ temperatures with a fourth likely occurring today (May 12).

Historically, this isn’t an extreme anomaly. Each location discussed before has observed a stretch of four or more days reaching 90°F consecutively in spring (Figure 4). The southwest and west have the greatest likelihood of observing such a stretch with Greensburg observing 18 and Tribune 13 in May. They have both also observed similar stretches in April as well. Further east, it becomes less frequent. While Concordia has had one stretch in April (seven straight days in 1989), both Chanute and Concordia have observed eight such periods in their historical record.

Indications for the summer

The flip from spring to summer was quite dramatic with the recent cooler conditions. Many are questioning if we jumped straight into summer, and the current weather pattern is quite similar to June/July conditions. The expectation of La Nina to continue into the fall is very concerning. Historically, summers following a La Nina winter trend warmer than normal and drier than normal for much of Kansas (Figure 5). With already persistent drought, these trends are concerning. Unfortunately, forecast models also suggest warmer and drier than normal through the entire summer. The Climate Prediction Center’s main summer outlook (June, July, August) currently favor higher probability of above-normal temperatures and below-normal moisture (Figure 6). This wave of heat could very much be the start of a very impactful summer. Hopefully other, more short-term global oscillations can break these expectations and prove these expectations wrong. 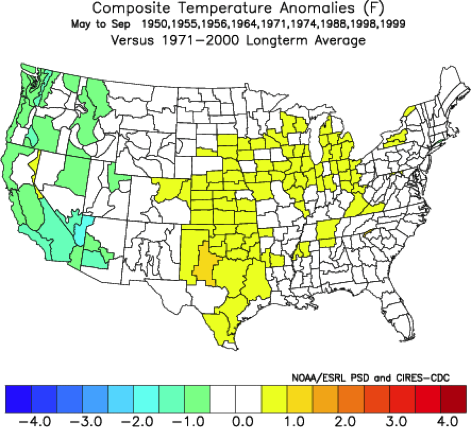 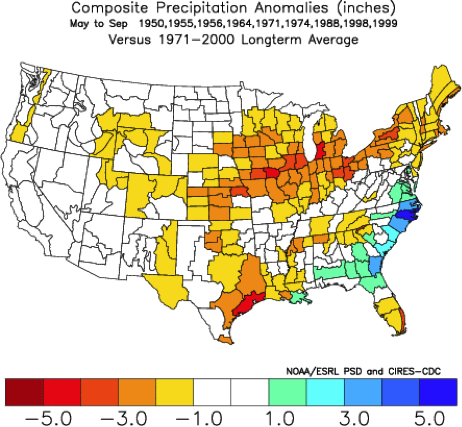 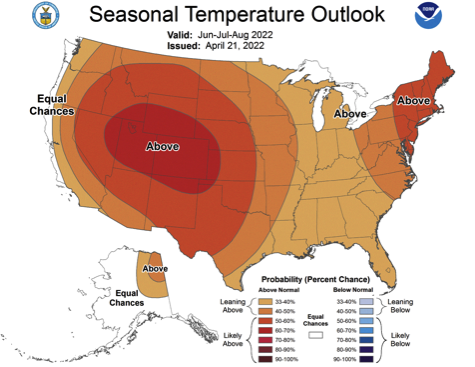 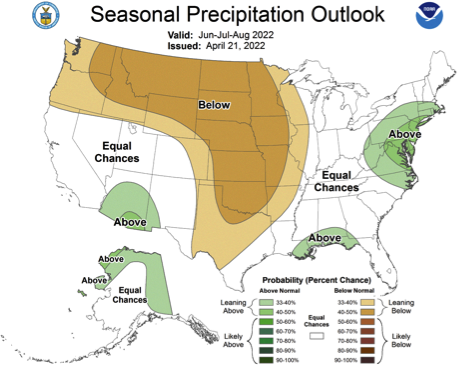