Both daytime high and nighttime low temperatures have been extremely high across parts of Kansas during the four-day period May 9-12 (Figure 1). Extreme heat in early- to mid-May occasionally happens, but usually just for a single day. To have four consecutive days of days with highs in the low- to mid-90s °F at a time when much of the state’s wheat crop is either in the heading or flowering stage is concerning. Unfortunately, that is the situation this year (Figure 2). 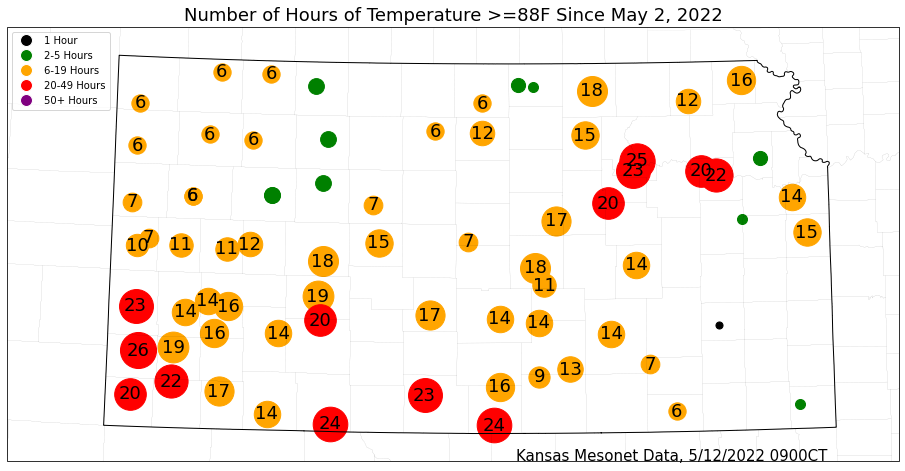 Figure 1. The number of hours of temperatures greater than 88 degrees F since May 2, 2022. Source: Chip Redmond, Kansas Mesonet Manager. 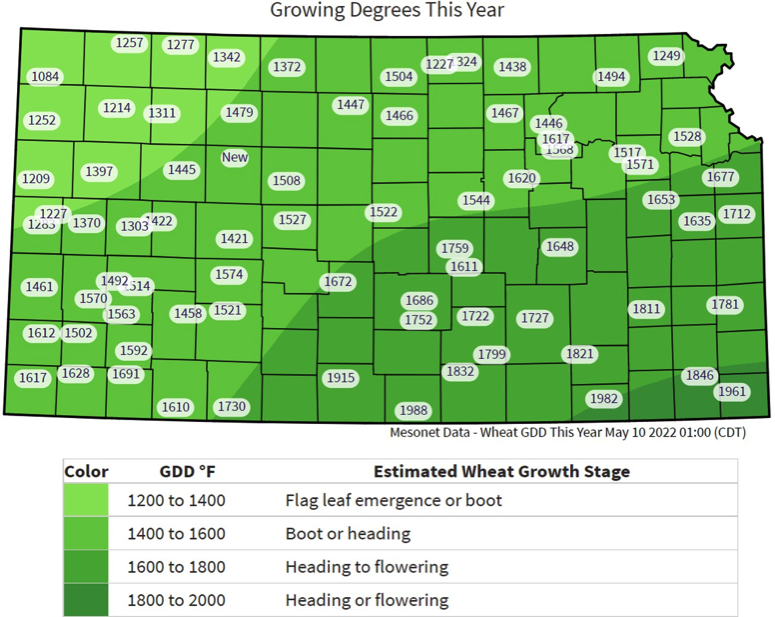 Wheat is generally sensitive to unusually high temperatures at nearly every stage of growth, being more sensitive in the reproductive stages than in the vegetative stages, and becoming less sensitive as it progresses from flowering to late grain fill (after soft dough stage of development) and physiological maturity.

One of wheat’s most sensitive stages to heat is anthesis (flowering). The optimum temperature for wheat from flowering to grain fill is about 54 to 72 degrees F. The longer the period of high temperatures and the higher the temperatures during reproductive stages, the more serious the potential yield loss. Temperatures above 88 degrees F immediately prior to anthesis can greatly reduce pollen viability, thus reducing grain number and consequently grain yield.

One bit of good news is that air temperatures do not necessarily correspond to temperatures within the wheat canopy. Plants can cool themselves by about 2 to 3°F when soils are moist. On the other hand, heat stress is often worsened by drought stress (Figure 3). We might expect the impact of the heat stress will be worse in areas where there is little or no soil moisture. 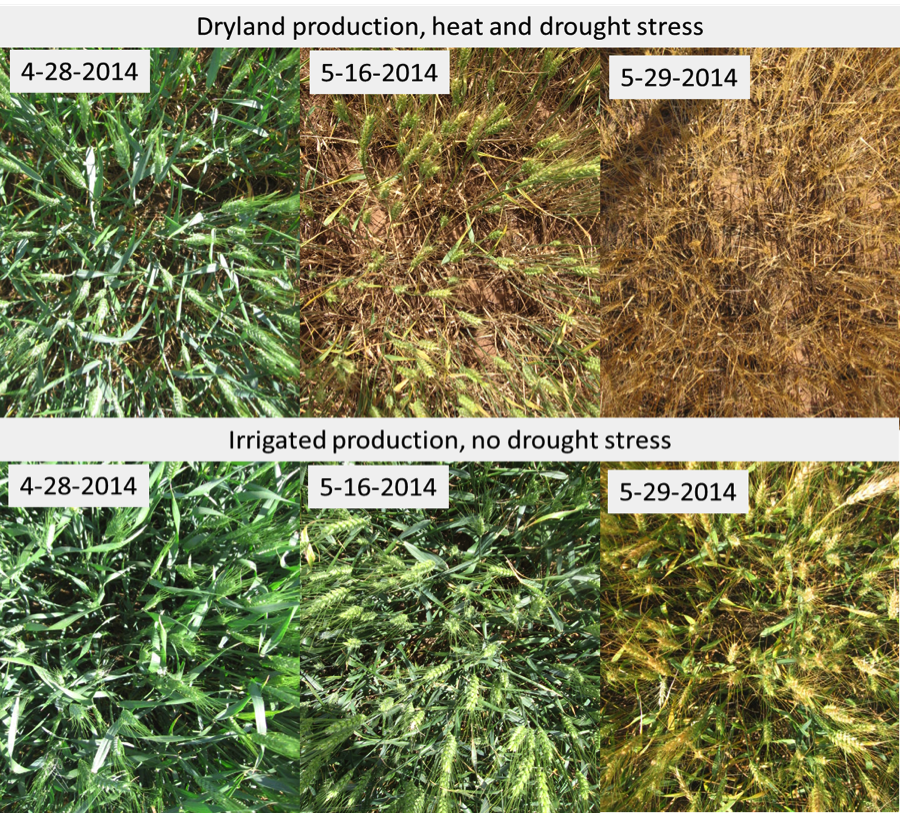 Figure 3. Interaction of heat and drought stress on wheat canopy coverage and leaf area progression between late April and late May (heading through grain filling and maturity stages). Photos were taken from neighboring fields conducted under the exact same management except that the field in the upper row was dryland and the field in the lower row was irrigated. Photos by Romulo Lollato, Extension Wheat and Forage Specialist, K-State.

Pollen forms in the developing head about 5 to 7 days before flowering. It’s during this period, in addition to the period of about 3 days following flowering, that the wheat is the most sensitive to heat stress. If temperatures in the canopy get above about 88 degree F during pollen formation, there can be significant pollination problems.

If the wheat is actively pollinating during the time of extreme heat, this can reduce fertilization, cause kernel abortion and a reduction in the number of seeds per spike, and ultimately reduce grain yield.

In general, the more advanced the wheat stage of growth when this period of extreme heat began, the less severe the potential damage might be.

Where wheat development is the furthest along, such as where wheat flowered somewhere around May 4 to 6 or earlier when temperatures were cooler, the current period of high heat should have no effect on the development of viable pollen and little effect on pollination success. There’s a good chance this wheat had already successfully pollinated before the period of extreme heat began. But that’s not to say the wheat in this stage of development would not be affected at all by the heat since. That wheat would probably have been at the kernel elongation stage during the period of maximum heat stress. Short-but-early heat stress during grain filling can reduce grain growth, sometimes to a greater extent than longer periods of moderately high temperatures.

Where wheat had just headed or began flowering during the period of May 9-12, there may be pollen sterility and/or problems with normal self-fertilization processes. Either way, seed set may be reduced, possibly severely in the worst-case scenarios.

Where wheat was still in the flag leaf or early boot stage of growth, heat stress could still reduce grain yield mostly due to a reduction in the length of what we call the “critical period.” The critical period for yield determination is the period most related to grain number determination, and in wheat it starts about 20 days prior to flowering and ends around 10 days after flowering under normal temperature conditions. Because crop development is driven by temperature accumulation, this period can be as long as 45-50 days in a cool and moist year, to as short as 15-20 days in a hot and dry year. By accelerating crop development, heat stress shortens the duration of this period and negatively impacts yield.

It is hard to put a number of the potential yield damage due to heat stress, as it depends on many factors such as stage of crop development during heat stress (different tillers and different kernels within a head will be at different stages of development), actual temperatures within the wheat canopy, and especially on grain filling conditions following this heat wave.

If the period of high heat damaged pollen viability, disrupted pollination, or caused kernel abortion, the effect on grain yields can be significant and irreversible, especially if grain fill conditions continue warm. Cool temperatures, especially nighttime temperatures, for the upcoming 3 to 4 weeks would normally help the crop compensate through lengthening the grain fill period, kernel weight, and the number of kernels per spikelet – if the heads were successfully pollinated. If the extreme heat occurred prior to pollen formation, pollen viability should be unaffected but shortening of the critical period could reduce yield. If the wheat had already successfully been fertilized at the time of the heat stress, grain yield could be reduced by reduced grain growth, but the actual effect on grain yield will depend greatly on whether the remainder of the spring is cool and moist.