Roughleaf dogwood is a shrub that can reach 15 feet in height. Flat-topped clusters of white flowers usually appear in late May to early June. Roughleaf dogwood can be found in fence rows, edge of woods, along streams, and open prairies. It provides cover for wildlife and nesting birds.

Smooth sumac will grow to a height of 5-7 feet and produces an open milo-like head in early June. It grows on rocky soils in pastures and along fence rows. Some birds will eat the seed and the plants provide cover for birds and mammals.

All three shrubs can produce clumps that will shade out and reduce forage production.  Cattle generally do not browse on these species, but sheep and goats are more likely to utilize these woody plants.

Top removal of buckbrush after the plants have leafed out and the nonstructural carbohydrates stored in the roots are at a low level can be an effective control.  One way to accomplish top removal is with prescribed burning.  Fire can be an effective control technique if burning is done in the late spring.  It may take 2 or 3 years of consecutive burning to reduce buckbrush stands.  If you missed the opportunity to burn this year or are located in areas where burning wasn’t possible, mowing becomes an option.  Again, it may take 2 or 3 years of consecutive mowing at the proper time (generally early to mid-May) to reduce stands.

Herbicides can also be used to control buckbrush.  The best time to spray occurs just as the leaves are starting to change from a light to dark green color (Figure 1).  This timing corresponds with the low point in the nonstructural carbohydrate cycle.  A number of herbicides can be used to spray buckbrush, but 2,4-D low-volatile ester formulations at 1.5 to 2 lbs/acre are usually quite effective.   Other herbicides used for buckbrush control include Grazon P+D (picloram + 2,4-D) at 2-3 pint/acre and Chaparral (aminopyralid + metsulfuron).  Chaparral can be used alone at 2 to 3 oz/acre for buckbrush control, but I prefer adding 2 pint/acre 2,4-D to 2 oz/acre Chaparral.   Caution should be used if treating cool-season grasses with Chaparral.  Grazon P+D is a restricted use pesticide.  Always read the label when considering the use of herbicides. 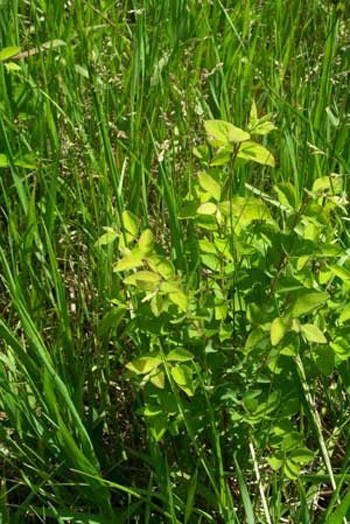 The optimum time to spray roughleaf dogwood is between the flower bud state and early seed production (Figure 2).  A number of foliar-applied herbicides including triclopyr (Remedy Ultra), dicamba (Banvel), and picloram (Tordon 22K) used alone or in combination with 2,4-D will defoliate roughleaf dogwood, but actual mortality is usually less than 25%. Roughleaf dogwood can be difficult to control. High-volume treatments providing greater than 50% mortality include 0.5-1% PastureGard HL (triclopyr + fluroxypyr), 1% Surmount (picloram + fluroxypyr), and 1% Grazon P+D + 0.5% Remedy Ultra (picloram + 2,4-D + triclopyr). All these herbicides are applied with water. Adding a 0.25 to 0.5% v/v non-ionic surfactant may enhance control. Aerial applications should be applied in a minimum 3 gallons per acre total spray solution to insure adequate coverage.

A single application of any herbicide does not completely eliminate roughleaf dogwood, but may open up the stand enough to carry a fire. In subsequent years, a combination of prescribed burning in the late spring followed by a herbicide application 4-6 weeks post burning should provide good control. 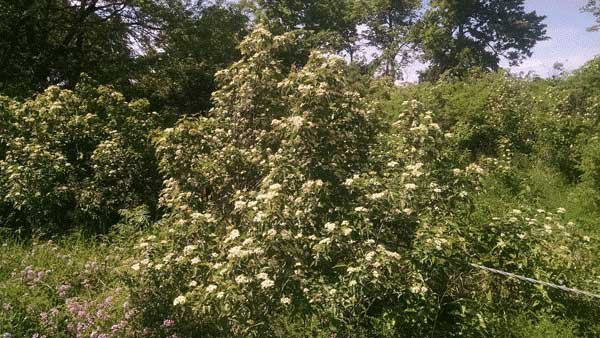 Late-spring burning will keep smooth sumac shorter in stature, but generally increases stem density.  The optimum time to spray smooth sumac is between the flower bud stage and early seed production (Figure 3).   Smooth sumac is among the easiest woody plants to control with herbicides if applied at the proper time.  Smooth sumac is controlled with 2-3 pint/acre 2,4-D with ground or aerial application. 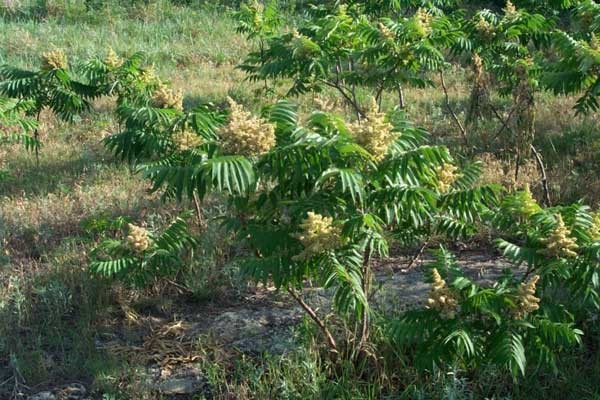 These dry soil-applied products may be useful in areas where spray drift may cause considerable non-target damage.