Fungicides are an effective way to reduce the risk of yield loss caused by leaf diseases on wheat in Kansas. Research continues to demonstrate that it is often possible to achieve high levels of disease control with a single fungicide applied between flag leaf emergence and heading growth stages.  The yield response to this fungicide application is influenced by the level of disease risk (amount of disease and predicted weather conditions), variety resistance to the most threatening fungal diseases, yield potential of the crop, foliar fungicide efficacy, and other factors.

Fungicides can also be applied in a split application, with an early application made between “spring green-up” and jointing, followed by a later application at flag leaf to early heading stage. That approach adds a little extra expense, and may or may not pay off compared to the single application approach, as the majority of the yield response is normally associated with the flag leaf application. It is also important to remember that fungicides will only protect the leaves present at time of application; thus, an application during jointing does not substitute for a flag leaf application, as any leaf that emerged after the application will not be protected.

When making split applications, the early application often uses a lower rate than the flag leaf/heading applications.  While this lower rate helps to keep the product cost down, it also reduces residual life of the fungicide relative to applications made at the full-rate. With the prevalence of low-cost generic fungicides on the market now, some producers are using a full rate of fungicide for the early application. The full-rate of most fungicides provides about two weeks of good protection, followed by a third week of partial protection to the leaves present at the time of application. Using a full rate early, however, could have implications for the second application. Growers will need to select a product and rate that stays within the labeled limits on the amount of each active ingredient used in a single season. You don’t want an early fungicide application to remove the ability to apply your preferred product at flag leaf.

Advantages and limitations of split applications

Some advantages to making an early application include:

The limitations of early-season fungicide application include:

K-State test results of early, low-rate fungicide applications indicate this practice is most likely to be effective in continuous wheat grown in high-residue conditions that favor the local survival of many disease-causing fungi.  The value of the early applications is diminished in other rotations, conventional tillage systems, or with varieties that are moderately resistant or resistant to the targeted diseases – usually tan spot or septoria leaf blotch, and powdery mildew. K-State has not tested the practice of making split applications using a full-rate of product at both times. 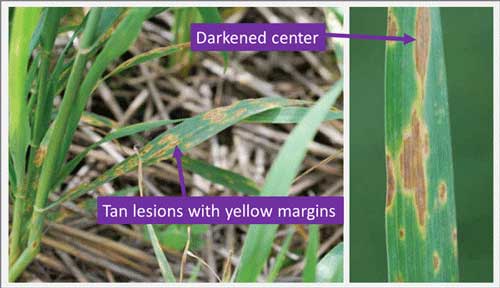 Figure 1. Symptoms of tan spot on wheat. Lesions are tan, with yellow margins, and mature lesions often have a darkened spot in the center. Photos by Erick DeWolf, K-State Research and Extension. 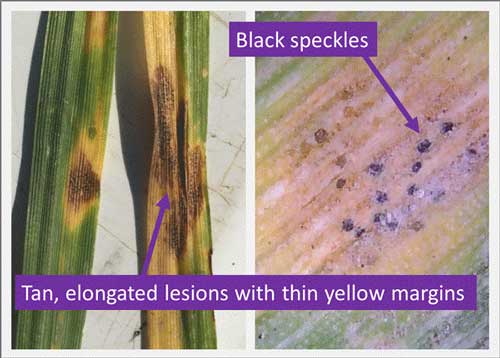 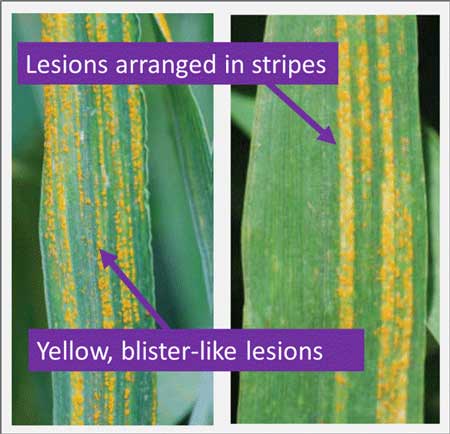 Producers considering the use of split applications must pay close attention to label restrictions. Every active ingredient in a fungicide has a maximum total amount that can be applied during the season.

For example, if an early application of a generic form of tebuconazole is applied at 4 oz/acre, a subsequent application of any fungicide containing tebuconazole alone or in combination with other ingredients (e.g. premix) around heading could put you over the limit for the crop season.

The main conclusions we can draw from recent studies in Kansas and Oklahoma are:

For information on assessing the need for wheat foliar fungicide, refer to K-State Research and Extension publication Evaluating the Need for Wheat Foliar Fungicides, MF3057.

Another publication providing good information, from which a few excerpts were used in this article, is Oklahoma State University’s Split Versus Single Applications of Fungicides to Control Foliar Wheat Diseases, PSS-2138.