Following wheat harvest some producers might be thinking about baling or burning their wheat stubble. Producers may consider burning for several reasons: as a management practice to control plant diseases or weeds, to improve the seedbed for the subsequent crop, and possibly other reasons. While burning is inexpensive and baling provides additional income, producers should understand the true value of leaving crop residue in the field. Some of the information below comes from K-State Extension publication MF-2604, The Value of Crop Residue.

There are four main factors to consider:

The products of burned wheat stubble are gases and ash. Nutrients such as nitrogen (N) and sulfur (S) are largely combustion products, while phosphorus (P) and potassium (K) remain in the ash. When residue is burned, about one-third to one-half of the N and S will combust. The nutrients in the ash may remain for use by the plants, if it doesn’t blow or wash away first (more on that below). Therefore, instead of cycling these important plant nutrients back into the soil, they can essentially become air pollutants when the residue is burned. With the rise in price for nitrogen fertilizers, the amount of crop residue N that could be plant available in the future is worth more than in years past.

Bare soil is subject to wind and water erosion. Without residue, the soil will receive the full impact of raindrops, thus increasing the amount of soil particles that may become detached during a rainfall event. Bare, tilled soils can lose up to 30 tons per acre topsoil annually. In no-till or CRP systems where residue is left, annual soil losses are often less than 1 ton per acre. The detachment of soil particles can lead to crusting of the soil surface, which then contributes to greater amounts of sediment-laden runoff, and thus, reduced water infiltration and drier soils.

Leaving residue on the field also increases surface roughness, which decreases the risk of both wind and water erosion. Most agricultural soils in Kansas have a “T” value, or tolerable amount of soil loss, of between 4 and 5 tons per acre per year, which is about equal to the thickness of a dime. To prevent water erosion, 30% ground cover or greater may be needed to reduce water erosion to “T” or less, especially in fields without erosion-control structures such as terraces.

Standing stubble is more effective at preventing wind erosion than flat stubble. On occasion, accidental residue burns have resulted in devastating wind erosion events that happen over and over again until a new ground cover is established (Figure 1). Once a field begins to erode from wind, it is extremely difficult to stop. During extended droughts the soil profile gets dried out and not even emergency tillage is effective at stopping the wind erosion. Losing topsoil degrades soil productivity, and the long-term effect of this loss is not easy to quantify.

Research results from six locations in western Kansas are shown in Figure 2. In this experiment, crop residue was removed at different levels by cutting the crop residue at different heights. For example, if the residue was 10” after it was combined, the residue would be cut to 5” and removed from the plot, and that would equal 50% removal. The wind erodible fraction is the part of the soil less than 0.84 mm in size. 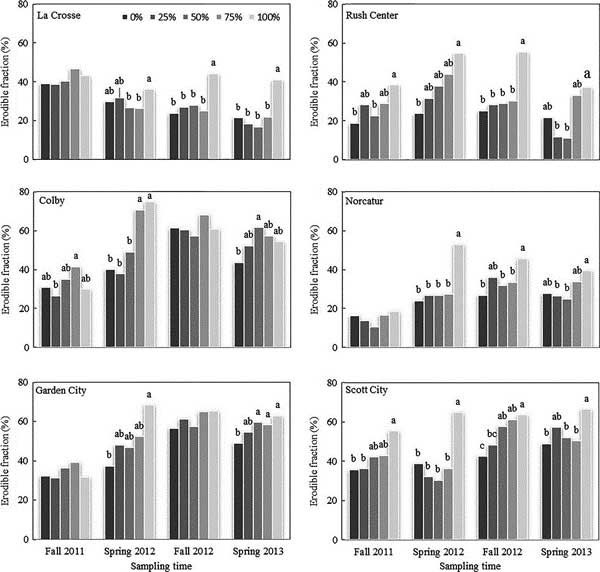 Figure 2. Effects of crop residue removal on the wind erodible fraction of soil, defined as <0.84 mm. Values on the x-axis (different shadings of the bars) refer to the percent residue removed. For example: 0% means no residue was removed, while 100% means that all residue was removed. Lowercase letters indicate treatment differences at p<0.05. From: He et al., 2017, available at: https://doi.org/10.1111/gcbb.12483

Wheat residue enhances soil moisture by increasing rainfall infiltration into the soil and by reducing evaporation. Residues physically protect the soil surface and keep it receptive to water movement into and through the soil surface. Without physical protection, water and soil will run off the surface more quickly.

Another way residue increases soil moisture is by reducing evaporation rates. Residue blocks solar radiation from the sun and keeps the soil surface cooler by several degrees in the summer. Evaporation rates can decline dramatically when the soil is protected with residue. Research from dryland experiments has shown that crop residues are worth 2 to 4 inches of water annually in the central Great Plains states (Efficient crop water use in Kansas, MF3066).

If producers do choose to burn or harvest their wheat stubble, timing is important, and should minimize the time that the field will be without residue cover and vulnerable to erosion. Before choosing to burn residue, producers should check with the USDA Natural Resources Conservation Service and/or the Farm Service Agency to find out if this will affect their compliance in any conservation programs.