This eUpdate article details specific options for late-harvested forages in Kansas and is a follow-up to an article published on November 16 in Issue 721. Readers can find the first article at the following link: https://ksu.ag/2DIvkQ1.

To say baling forages this year has been a challenge would be an understatement. Many producers had good forage yields but struggled to get the crop dry enough for baling. Rain, and eventually snow, fell in many places across Kansas, which delayed the dry down time until baling. Some producers still have their crop in the field. Large tonnage windrows and large crop stalks, like forage sorghum, require one to two weeks of drying before baling with good weather drying conditions. This year, some producers received over 12 inches of rain after swathing. This resulted in crop regrowth upwards of six feet tall, making it difficult to see the windrow and reducing the air movement near the ground needed to dry out the crop for baling.

Raking can often speed up the drying process, however with large windrows, merging two windrows together can slow drying and make a windrow so large that a baler has a difficult time handling all the material. With large windrows, inverting or fluffing the crop can help speed the drying process, particularly the lower portion of the windrow. Before inverting, the stalks in the middle and top third of the windrow need to be dry. In addition, the ground next to the windrow must be dry before moving hay onto it. Frequent rains have made this difficult. Also, inverting the windrow exposes more of the crop to potential rainfall, thus fluffing the crop is sometimes a better option.

There is both a science and an art to baling hay. Moisture content of large bales should be < 16%. If moisture content is too high, the temperature within the bale will increase, and in extreme cases can exceed 195 degrees F and spontaneously catch fire. If the bale heats to temperatures > 120 degrees F, protein can be damaged and becomes unavailable, total digestible nutrients (TDN) is reduced, and dry matter loss occurs. The art to baling comes from knowing if the moisture in the windrow is within the stalk or due to relative humidity, and matching relative humidity to moisture content of the windrow to minimize leaf loss. It is imperative that there is no stalk moisture when baling. If the moisture is coming from relative humidity, one can push the upper limits of the previously recommended moisture content without causing problems as long as the crop is thoroughly dry. Most operators learn these limits after years of baling, yet occasionally push them a little too far when rain is in the immediate forecast!

Cutting the crop high and leaving 6 inches of stubble can help hold the crop off the ground to aid in the drying process. However, with excessive rainfall, the crop will eventually settle to the ground, as was often the case this year. Maintaining crop stubble also helps prevent soil erosion and capture moisture. The lower portion of the windrow with excessive rain can be wet and moldy, while the upper portion dry. Some producers may be able to set a rake or baler pickup attachment a little higher than normal and leave the lower portion of the windrow on the field. This reduces the moisture content of the bale that otherwise might have been too wet and resulted in heat damage and further loss. This lower portion can be sacrificed if additional rain is in the forecast. If the lower portion has become moldy, cattle would have rejected if fed free choice.  Or, one can hope that there will still be enough dry, warm days this fall to wrap up baling later.

Figure 2. Bales in the background showing no sign of squatting, indicating moisture content was appropriately dry at harvest. Photo by John Holman, K-State Research and Extension. 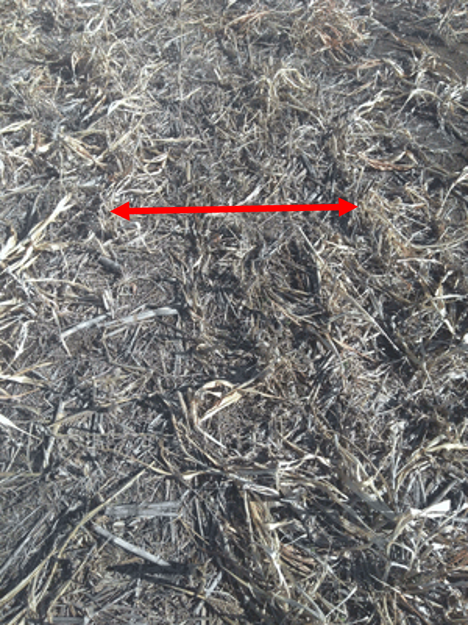 Figure 3. Photo illustrates a portion of the crop left on the ground after baling to reduce moisture content and moldy feed in the bale. Arrows indicate the old bottom portion of the windrow left on the soil surface. The other residue is regrowth that occurred after swathing. Photo by John Holman, K-State Research and Extension.

In some instances, swathing was delayed waiting for drier weather that would be more conducive to baling. However, by delaying swathing the crop becomes more mature resulting in lower CP, lower energy, and reduced palatability. This year because the rain events kept occurring, the crop matured to the point that harvesting the crop as silage rather than baled forage might be a better option for those that can feed silage. Leave at least 6 inches of residue cover on the field to minimize the potential for soil erosion through the winter. When harvesting for silage, the moisture content should be 60 to 65%. If harvesting silage after a frost, the moisture content might drop below 60 percent. If this is the case, water can be added to the top two to three feet as it is packed in the silo to obtain a good pack. However, it may be logistically difficult to apply enough water fast enough to keep up with the rate of silage being brought in. When applying water, uniformly apply to the entire surface after each load. Adding seven gallons of water per ton of silage will increase the moisture content about one percent. Delaying silage harvest too long will result in leaf loss and lodging, so don’t delay long after a frost if harvesting as silage. If the crop is too dry, ensiling won’t work and the only options are to swath and bale or graze. Putting silage up too wet can result in seepage and nutrient loss. Cover the silage pile soon after packing to minimize dry matter loss.

Given the conditions this year, one of the best options might be to graze the windrows. Cattle will first selectively graze the regrowth if present, particularly the heads and leaves, before grazing the swathed forage. If the windrow was tight and narrow and yields were high, the crop under the top might be surprisingly well preserved. Grazing the windrows directly may require some portable fence and water hauling, but will save the cost of baling and feeding. Strip grazing the windrows will reduce the amount of waste but will also increase labor costs. If grazing, sample the forage and provide supplementation as needed.  Any class of animal could initially be used to graze the windrows (although additional CP or TDN might be required), however, dry mature cows are likely to do the best job cleaning up the last of the windrows. Two toxicities to be aware of are nitrates and prussic acid. In some cases, the forage should be tested before feeding. This past year, with all the rain, it is unlikely nitrates will be a problem unless the crop was heavily fertilized. Sorghum contains cyanogenic glucosides, which are converted quickly to prussic acid in freeze-damaged plant tissue and also occur in young new growth. Prussic acid restricts the ability for blood to carry oxygen, causing animals to die of asphyxiation within minutes of ingestion under the right circumstances. Frost causes plant cells to rupture and prussic acid gas forms in the process. Because the prussic acid is in a gaseous state, it will gradually dissipate as the frosted/frozen tissues dry. Thus, risks are highest when grazing frosted sorghums and sudangrasses that are still green. New growth of sorghum species following frost can be dangerously high in prussic acid due to its young stage of growth. Prussic acid content decreases dramatically during the hay drying process and during ensiling. Frosted foliage contains very little prussic acid after it is completely dry, therefore it is recommended to wait ten days until after a killing freeze before grazing. Sorghum and sudangrass forage that has undergone silage fermentation is generally safe to feed.

If the forage is baled and ground and part of a total mixed ration, then the forage will be consumed if the weathered forage content is not too high. If the hay is fed free choice, cattle rejection and trampling will approach 20 to 30% (perhaps more if extremely moldy), about the same as if just letting cattle graze the windrows. In addition, there are soil nutrient and carbon benefits to leaving residual swath grazed residue on the field.

Figure 6. Cattle-grazed windrows - Forage is still green inside the windrow despite being swathed 60 days ago. The forage received 14 inches of precipitation after swathing. Photo by John Holman, K-State Research and Extension.