Kansas continues to see prolonged drought and warm temperatures through fall. Moisture has been limited to primarily one late-September event in the northwest and north central Kansas. Otherwise, very dry conditions have persisted statewide. Many locations across the state have gone 30-50 days without a half inch of moisture (in one day) (Figure 1). While this has helped harvest, it has generally led to poor wheat planting conditions. Drought is also leading to water quantity concerns, especially in the southeast portion of the state. If you have a drought impact, be sure to report it here: go.unl.edu/CMOR.

Figure 1. Days since 0.5 inch of rainfall was recorded at a time as of October 5, 2022. Data from the Kansas Mesonet, http://mesonet.k-state.edu/precip/consecutive/#mtIndex=2&tab=chart-tab

The central Plains have been one of the driest regions of the United States over the last few months (Figure 2, left). Meanwhile, to the west/southwest, abundant monsoons brought normal to above-normal precipitation. The southwest US moisture continues even up with monsoons persisting later than normal. A similar trend of increased moisture in Arizona and Utah occurred in 2021 (Figure 2, right). However, widespread drought had hold of most of the western US outside that region (Figure 3, right). This year, drought conditions have actually been improved (while not completely removed) for most of the same regions in the west (Figure 3, left). It is apparent that much of the Rockies drought conditions have migrated somewhat into the Central US and taken hold over Kansas and neighboring states. The upstream wetter conditions in the west, and resulting higher soil moistures, will be something to watch. They may play a small role in how systems successfully make it across the west.

Temperature-wise, conditions for the Central Plains and westward are very similar to last year. July through September anomalies were 1-3°F above normal for all but the southeast. This year, temperature anomalies were slightly warmer and covered all but the Midwest to the Gulf states. Warmer temperatures become more impactful as we get into the fall and winter because seasonally, winds increase. This enhances potential evaporation of remaining surface moisture and can more efficiently dry out soils and/or reduce the positive impact of any recent moisture.

The Forecast – Third La Niña in a row

The big headline for the third fall/winter in a row continues to be the La Niña state of the eastern Pacific along the Equator. While some La Niñas aren’t overly influential to the US weather pattern, this event has been quite impactful. It has helped drive drought expansion across the region with continued blocking/high pressure to our west. Additionally, La Niña has worked with the negative Pacific Decadal Oscillation to help be “deconstructive,” preventing a significant pattern change and the shunting influence of other oscillations. The good news is that as we get into winter, our weather becomes more influenced by these other oscillations and the likelihood increase for a change. Unfortunately, until the overall background changes, it is likely that any change would be short lived. Kansas typically sees an increase in warm/dry extremes over the winter with La Niña in place. Last year fit the bill with the warmest December on record for Kansas. 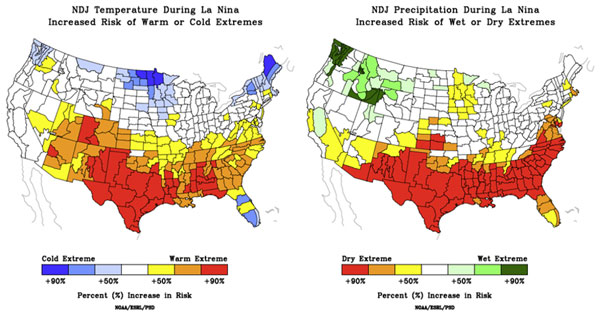 Since forecast models keep La Niña in place this winter for the third straight year, we refer to it as a “triple dip” La Niña. This will be only the third time it has ever occurred since records began in 1950. The previous years were centered around 1974 and 1999. That doesn’t provide us with a very good historical analog since it is a rare event. However, the summer of 2000 was so much like 2022 that it is hard to ignore since it too was the third year in a triple dip La Niña. Precipitation wise, 2000 was the 7th driest on record from July to September (5.31” statewide). Similarly, 2022 is preliminarily the 10th driest (5.66”). Very similar temperatures occurred as well. The July to September 2000 period is tied for 10th warmest on record with a statewide average of 77.7°. This summer had an average of 77.1°, good enough to tie for 16th warmest.

Since 2000 would be a rough analog for the summer of 2022 (July through September), it is worth looking into what happened with the winter into 2001. While that year featured moderated weather for the fall period (already unlike what appears likely for 2022), it did feature a change over the winter. After a warm and dry December 2000, it flipped and became quite cool and wet. In fact the December through February 2001 period was the 16th coldest and 8th wettest on record. It also featured above normal snowfall! I think Kansans would take that!

Unfortunately, there is a lot more that goes into an outlook aside from a simple analog. Several factors need to be considered as we enter the cold season. First, sticking with La Niña, the forecast a transition to moderate (between -1° and -1.5°) event before trending towards neutral later in the winter (Figure 5). While this was forecasted to occur last winter, odds are increased for verification this year since there has never been a period of four straight winters with La Nina. Granted, we only have about 70 years of data. 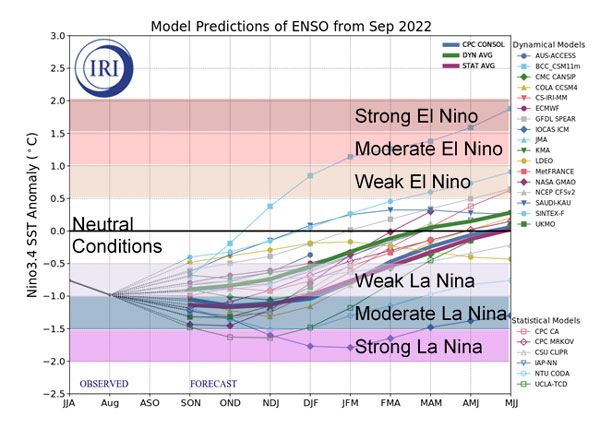 La Nina conditions typically favor a dipole of conditions north to south across the US. The northern US is favored for below normal temperatures and above normal precipitation while the southern is the opposite, split by the jet stream (Figure 6, left). The location of the mean jet stream flow will help determine where the greatest impacts will be felt. Additionally, common terminology these days often brings up the “Polar Vortex” during the winter months. This is basically the northern jet stream that follows the Arctic Oscillation (AO). When it is positive, the vortex is stable with cold air and the jet stream mostly confined to our north. When the vortex breaks down and weakens, the AO typically becomes negative and significant bursts of cold air could potentially drop into the mid-latitudes (Figure 6, right). This is exactly what happened in February 2021.

The AO/polar vortex changes on a much quicker scale than the ENSO. As a result, it is a bit harder to predict far out. However, with La Niña in place, it does provide a favorable background for negative AO to be more impactful for the Central Plains. Additionally, some preliminary research shows that the resulting cooling of the stratosphere in the southern hemisphere as a result of the Wunga Tonga eruption could potentially lead to a more negative AO and weaker vortex in the northern hemisphere’s following winter. This would increase confidence in additional cold air outbreaks and general storminess come mid-winter. Unfortunately, with residing La Niña, the overall northwest flow may still result in dry air masses that don’t provide beneficial moisture long term during these colder periods. Remember, winter is still the driest time of year in Kansas.

So what does all that mean? In the short term, La Niña is going to continue to dominate our weather pattern. Though there are some signs that the Madden Julian Oscillation (MJO) may bring some hints of Central Plains moisture mid-to-late October into early November, the overall forecast is expected to align with persistent warmer than normal and drier than normal through the end of the year (Figure 7). There is optimism however, as the negative AO/vortex becomes more favorable early 2023, we have equal chances of above/at/below normal temperature and precipitation in Kansas. Though it doesn’t favor the above normal precipitation we hope to see, we will take a less chance at below normal for once!