The 2020 Wheat Quality Tour had to take a virtual path during 2020 due to the COVID-19 pandemic. Thus, during May 18 – 21, 2020, a few people drove around Kansas to scout wheat fields and make yield estimates. Many KSRE Agriculture Extension Agents also participated, doing yield estimates and crop scouting in their own region. For his part, Dr. Romulo Lollato drove 1,647 miles in three distinct routes across Kansas, resulting in 65 yield estimates across the state (Fig. 1). At the end of each day, several live reports for the crop conditions across the state occurred. These were recorded and, together with more information, are available at http://kswheat.com/harvest/hrw-virtual-wheat-tour 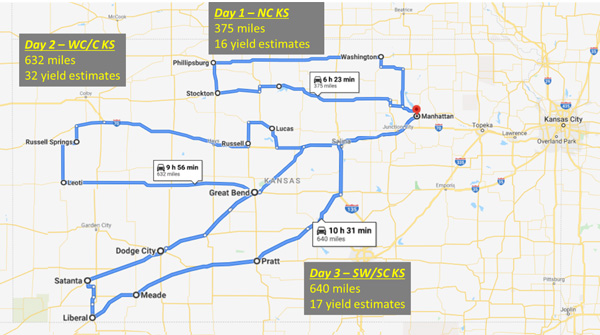 The Kansas wheat crop is very variable and its overall condition depend on the region of the state. The 2020 total production estimate for Kansas, resulting from the tour, was 284 million bushels of wheat, comparing to 306, 243, and 282 million bushels in 2019, 2018, and 2017. The current estimate corresponds to a yield of 45 bu/ac and an area abandonment of about 8%. Weather conditions during the remainder of the growing season will be crucial in determining the final production.

Perhaps the two most predominant highlights during the 2019-2020 wheat growing season in Kansas were the extended drought in parts of the state and the freeze events that happened on April 3 and April 13-17. The drought has been affecting southwest and west central Kansas since last fall (Fig. 2, upper panel), resulting in many fields that only emerged in the spring. Since the winter, the drought was also taking its toll on the crop in the North central portion of the state. Meanwhile, the freeze events of April resulted in temperatures ranging from a low of ~8 °F in northwest Kansas (where the crop was tillering), to about 30 °F in south central Kansas where the crop was at the boot stage. Analysis of the risk of freeze damage based on the coldest temperature measured, the stage of crop development, and the number of hours that temperatures were sustained below cold tolerance thresholds associated with the different crop stages across Kansas indicated that the greatest risk of freeze damage was in the central portion of the state (Fig. 2, lower panel). 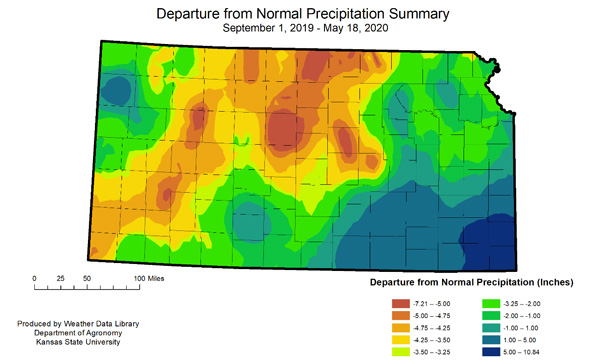 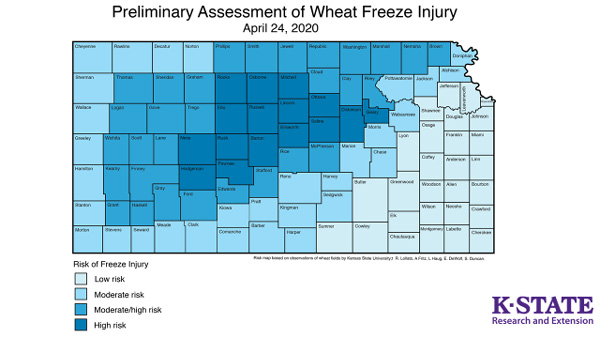 Figure 2. Departure from normal precipitation experienced during the wheat growing season (September 1, 2019 through May 18, 2020; upper panel) and preliminary assessment of wheat freeze injury on April 24, 2020, developed in collaboration with Erick DeWolf and the Weather Data Library, from the estimated wheat growth stage as of April 28, 2020.

The true damage of the freeze to the wheat crop depended on the freeze’s interaction with drought stress. In regions where the freeze was followed by precipitation, the crop recovered well. These include the region between Republic county down to Saline county, southwest to Barton county and north until about Russel county and eastern Ellis county. The predominant symptoms in these cases include a number of tillers that were terminated and perished in the lower canopy (20-40% of the tillers at the time of the freeze event). Otherwise, the upper canopy does not show symptoms of freeze damage because there were enough new tillers developed to make up for a large portion of the yield potential (Fig. 3). However, low-lying fields in this region, in which low temperatures were lower and likely sustained by a longer period of time, had severe freeze damage. In these cases, the stand was thinned out allowing for weeds to thrive (Fig. 4). Even though the crop was trying to recover due to available moisture, the yield potential of the newly formed heads is very limited (Fig. 4). In these cases, the new tillers are much shorter than the older tillers, which can result in harvest losses. Additionally, these later tillers will also mature later and likely hold moisture high during harvest time.

Figure 3. Wheat field in Republic county showing loss of the lower leaves due to the freeze damage, but good recovery of new tillers and foliage. Photos by Romulo Lollato, Extension wheat specialist with Kansas State University. 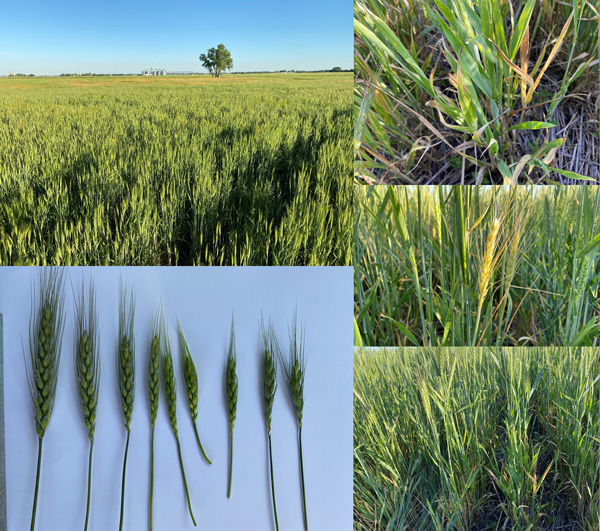 Figure 4. Wheat field in a low-lying area of Barton county. Although there was enough moisture for the crop to recover, the cold temperatures in low lying areas led tiller loss and thinning out of the stand, allowing weeds to thrive. The newly emerged heads are considerably smaller and lower in the canopy than the original heads, which can result in harvest delays and losses. Photos by Romulo Lollato, Extension wheat specialist with Kansas State University.

In regions where the cold snap was not followed by precipitation, the crop is struggling to recover from the freeze damage. This region was mostly that of Smith and Osbourne counties and west. The loss of several tillers and lack of moisture for recovery is resulting in many extremely thin and drought stressed stands, with several plants producing one or two heads (Fig. 5). The effects of the freeze damage were worst in late-planted fields (usually following a soybean crop in central Kansas or corn crop in northwest Kansas) as compared to fields sown at the optimum time (after a wheat or corn crop in central Kansas, or after a wheat crop or fallow period in northwest Kansas).

The cropping system was also playing a role in west-central Kansas. In this region, many fields still had a good yield potential, and were neighboring fields that were extremely affected by the freeze/drought (Fig. 6). Drought stress intensified as we headed southwest. Counties west of Hodgeman, including northern Ford County, Gray, Haskell, and Seward counties, were severely impacted by the long-term drought stress. The majority of the dryland wheat fields in that region were already going through the early stages of grain development, and many times were 8-9 inches tall (Fig. 7).

As we headed to central and south central Kansas, the crop conditions and yield potential noticeably increased. This was mostly driven by good moisture conditions (Fig. 1) and temperatures that did not get cold enough to cause damage during the freeze even. In this region, however, which encompasses the counties of Meade in the southwest border, Sumner in the southeast, and as far north as McPherson; the incidence of stripe rust was extremely high. Many fields had already lost a considerable amount of green leaf area (Fig. 8), which can highly compromise wheat yields. Unfortunately, most of the wheat crop in this region is already past the last date in which fungicides can be applied based on product label, so in these cases, there is not much growers can do. For the regions in which the crop is behind in development and that there is still time to apply fungicides, we advise producers to scout their fields for the disease be prepared to spray especially susceptible varieties. The decision to spray a foliar fungicide should take into account the yield potential of the crop, the crop price, disease incidence, weather conditions, variety susceptibility to the disease, and the costs of product and application.

The above factors are a few of the major challenges that the 2020 Kansas wheat crop was facing during the tour. While all should contribute to restricted wheat yields to a certain extent, the largest uncertainty when estimating wheat production at the state level is the weather during grain filling. Because the crop is two to five weeks from harvest, cool and moist conditions during grain fill are essential to ensure a decent crop. If warm and dry conditions arise, the wheat yield potential can be severely limited.