The 2019 Wheat Quality Tour took place from April 29 through May 2, 2019. Approximately 75 people actively scouted hundreds of Kansas wheat fields in 20 groups and along six routes (Figure 1). The groups left Manhattan and headed to Colby on the first day, from Colby to Wichita on day 2, and finally from Wichita to Manhattan on day 3. 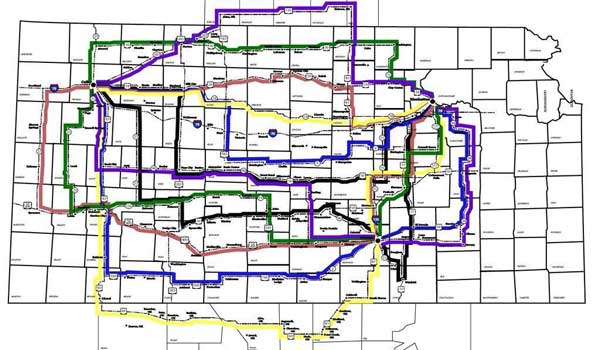 The Kansas wheat crop is overall in good condition; however, there are a few potential challenges. The overall 2019 production estimate for Kansas resulting from the tour was 306 million bushels of wheat, compared to 243 million bushels in 2018 and 282 million bushels in 2017. The current estimate corresponds to a yield of 47 bu/ac and an area abandonment of 6.5%. Weather conditions during the months of May and early June will be crucial in determining where final production will actually land.

The 2019 Kansas wheat crop is anywhere from two to four weeks behind normal for crop development. For instance, in previous years of the wheat tour, stages of crop development around the state ranged from early grain fill in south central Kansas to boot stage in northwest Kansas. This year, the furthest along fields sampled were in late boot or early heading stages in south central Kansas, and the majority of northwest Kansas is now just jointed (first node) (Figure 2). This delayed development is a consequence of below-average seasonal temperatures, as the departure from normal temperature during the growing season (October 1, 2018 to April 30, 2019) ranged anywhere from zero to minus 4.5 degrees F across the state (Figure 3). 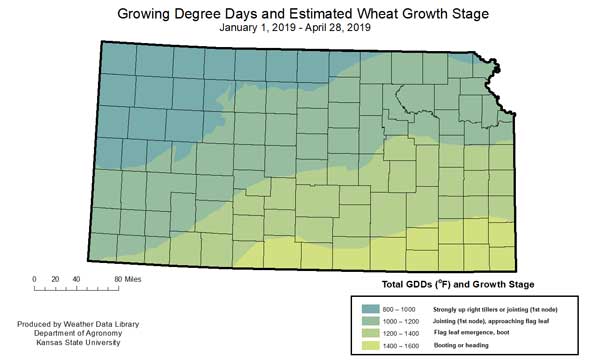 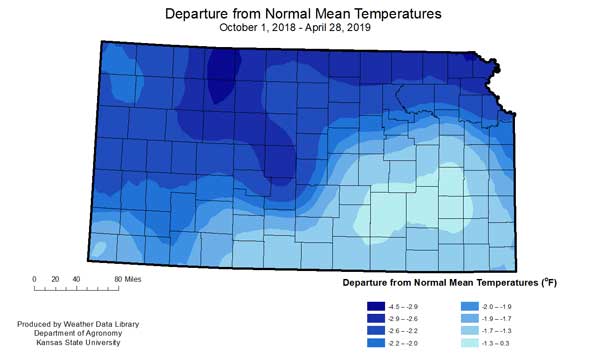 The consequences of this delayed development will depend on the weather conditions during May and June. If conditions are cool and moist, as Kansas experienced in 2015, 2016, and 2017, the crop might still go through favorable grain fill conditions and produce a decent yield. However, if temperatures are normal or above normal, the crop might go through heat stress during grain fill, which can severely limit grain yield. For fields that are currently at boot stage (south central Kansas), ideal weather conditions would result in as many as 50 days or more until maturity. However, if conditions are warmer and drier-than-normal, the crop might only have about 35 days or less, consequently reducing grain fill duration. Likewise, where the crop is still at the jointing stages of development, ideal conditions would result in as many as 70 days until maturity. However, warmer conditions might reduce this period to 50 days or less, restricting wheat yield. Heat stress during grain fill limits the photosynthetic production of sugars and decrease the accumulation of starch in the grain, reducing grain test weight and grain yield, consequently increasing the percent protein in the grain.

October 2018 was extremely wet, with all parts of the state recording at least ¾ of an inch more than normal. Parts of south central and central Kansas had between 5 and 11 inches greater than average precipitation. This caused the 2019 Kansas wheat crop to be planted either before ~October 5, or towards the end of October and into November. In addition, temperatures during the fall, winter, and early spring were cooler-than-normal, not allowing for much vegetative growth (for more details, see the March 8 eUpdate “Kansas wheat crop update - March 8, 2019”). This difference in development is being carried over until today, with huge differences in development and yield potential between early- and late-planted fields (Figure 4). The early-planted field in Figure 4 is at the flag leaf stage, while the late-planted field is still at the beginning of stem elongation. These differences in development will cause heading and grain fill to occur later in the small crop, and thus having the potential to expose it to hotter grain fill conditions further limiting its yield potential. 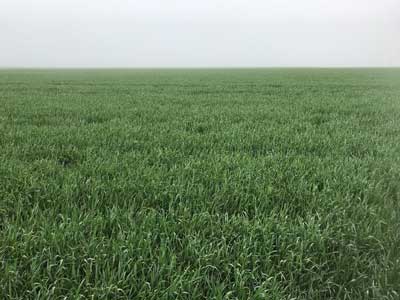 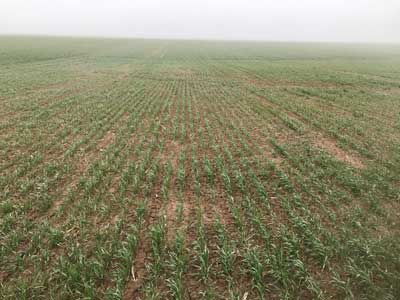 One common theme of the 2019 Wheat Quality Tour was nutrient deficiency, specifically nitrogen and sulfur. While the frequency of fields showing nutrient deficiency symptoms was higher in some regions such as Edwards and Stafford counties (Figure 5), nutrient deficiencies were common across the entire state. Some potential explanations are: 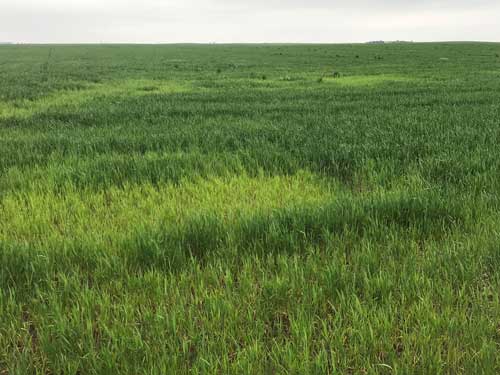 Central and east-central Kansas are also facing an additional problem of water logging. Many fields in the region between Stafford and Dickinson counties have extremely moist soil conditions, which are showing symptoms of water logging (Figure 6). Symptoms often consist of portions of the field where the entire wheat plant is dead due to anaerobic conditions (these portions would be white and will not produce grain yield, or plants would be completely absent as in Figure 6). The high incidence of water logged fields is resultant for high total growing season precipitation coupled with poor drainage capacity of soils in the region. 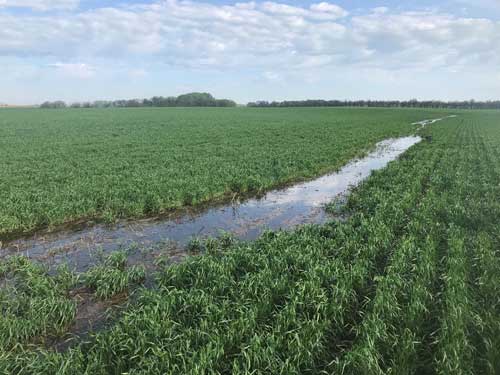 Figure 6. Water logged conditions leading to plant death due to anaerobic conditions in the lower parts of the fields. Photo taken in Marion County, KS, by Romulo Lollato, K-State Research and Extension. 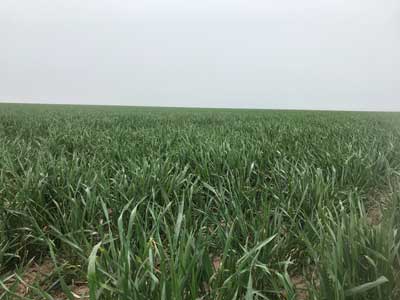 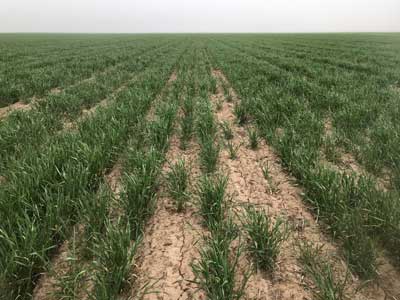 Figure 7. Example of a field that looked uniform and with a high yield potential from the road (upper panel) but showed an extremely variable stand upon close inspection. Photo taken in Gove County, KS, by Romulo Lollato, K-State Research and Extension.

On a positive note, the incidence of stripe and leaf rusts in the 2019 tour was very low and mostly in the second day of the tour, when the group scouted south-central Kansas and north central Oklahoma. While at low incidence at this time, stripe rust has been reported in Oklahoma for a few weeks and the recent rainfall events likely brought spores to Kansas fields. It will take approximately two weeks from the time spores are introduced to the fields until the lesions are visible to the naked eye; thus, we advise producers to scout their fields for the disease in the next few days. The majority of the state is still within fungicide application window and in case the disease is present, producers still have the option for spray. This decision should take into account the yield potential of the crop, the crop price, disease incidence, weather conditions, variety susceptibility to the disease, and the costs of product and application.

The above factors are a few of the major challenges that the 2019 Kansas wheat crop is currently facing. While all should contribute to restricted wheat yields to a certain extent, the largest uncertainty when estimating wheat production at the state level is the weather during grain filling. Because the crop is two to four weeks behind in development for the majority of the state, the cool and moist conditions during grain fill are essential to ensure a decent crop. If warm and dry conditions arise, the wheat yield potential can be severely limited.