The snow that fell over much of Kansas on December 28-29 evoked thoughts of a white Christmas.  Unfortunately, the warm weather expected over this coming weekend makes this scenario highly unlikely.  Manhattan recorded five inches of snow (with heavier amounts in surrounding areas) from the storm, but as of Thursday afternoon, most of the snow had melted (Figure 1).

Figure 1. Change in snow cover between Monday and Thursday in Manhattan (Kansas Mesonet)

The Climate Prediction Center’s 6 to 10-day outlook favors wetter-than-normal conditions for the period, but also warmer than normal.  Average high temperatures are near 40 oF with low temperatures in the upper teens into late December. Average rainfall is minimal with a few thousandths of an inch each day. Therefore, above normal moisture doesn’t have to amount to much (less than 0.25” on any given day is above normal). Temperatures warmer than normal also favor temperatures well above freezing during the afternoons. While some snow could still occur at night, it would be unlikely to achieve significant accumulation during a period of above normal temperatures.

Is this unusual? It depends on how you define a white Christmas. Does it count if there is snow on the ground, even if it fell before Christmas Day? Does it count when snow fell on December 25th, even if it is not recorded until the 26th? For most of us, it is a white Christmas if there is snow on the ground or if snow falls on the 25th. In northeast Kansas, this occurs only one in every five years (Figure 2). 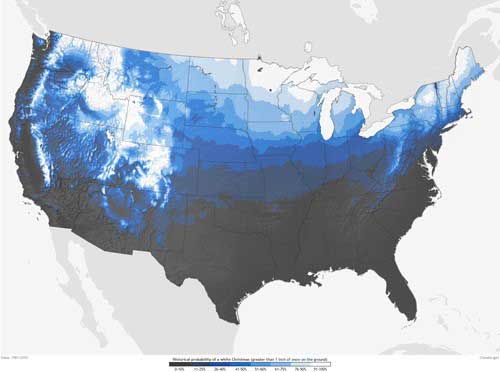 The last White Christmas in Manhattan was in 2017, when an inch remained on the ground from an earlier storm. The last time snowfall was reported on Christmas Day was in 2009, when 6.1 inches was recorded.

However, a snowy start to the new year is more likely than a white Christmas. Historical records indicate the odds are one in four years to have snow at the new year. The most recent Climate Prediction Center’s 6-10 Day Outlook indicates a strong probability of wetter-than-normal conditions to end the year (Figure 3).

The major question is what track the frontal systems will take, and how that track influences the form of precipitation. A more southerly track will bring colder air into play, reducing the amount of moisture and increasing the chances that it will be in the form of snow. A more northerly track will increase the amount of moisture available, but also make it more likely that the precipitation will fall as rain.

Check the National Weather Service for updated forecasts at www.weather.gov and to track current conditions, check the Kansas Mesonet at mesonet.ksu.edu.