Precipitation statewide averaged slightly above normal for the week (0.93 inches, 107% of average), but the distribution of rainfall across the Sunflower State was uneven (Figure 1).  The western third of Kansas received the least precipitation, with west central faring the worst: an average of 0.14 inches fell, just 20% of normal (Figure 2). Overall, northeast, east central and south central Kansas averaged 166 to 182% of normal weekly precipitation during the period (Figure 2).  North central and central Kansas had near to slightly below normal precipitation, as did southeast Kansas. South central Kansas had two generous rain events, on the June 22 and June 26.  On the 26th, Rock 3 SW NWS COOP (Sumner County) recorded 3.64 inches, the largest one-day rainfall of the week. A CoCoRaHS observer near Wellington (Sumner County) reported 5.83 inches, the highest weekly total in the state. North central and northeast Kansas had rainfall on the morning of the June 23 and again that evening into the pre-dawn hours of June 24.  The heaviest rain fell in the I-70 corridor from Salina to Manhattan, extending east to Kansas City.  A CoCoRaHS observer in Abilene (Dickinson County) recorded a 24-hour rainfall of 2.90 inches, while multiple observers in Riley and Pottawatomie Counties measured over 2 inches.  Southwest Kansas received needed rainfall on June 27, when as much as half an inch fell, but that was limited to the far southwest and still below normal for the week. 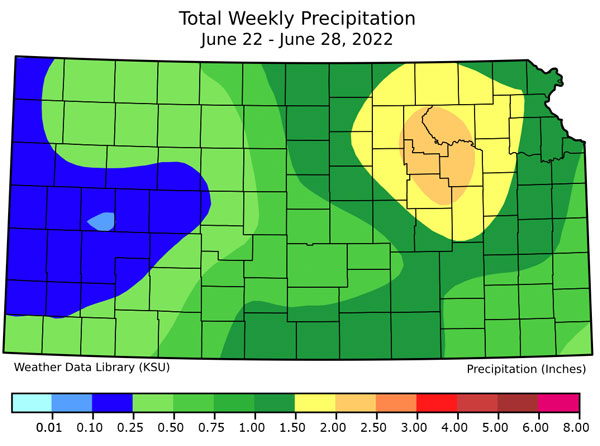 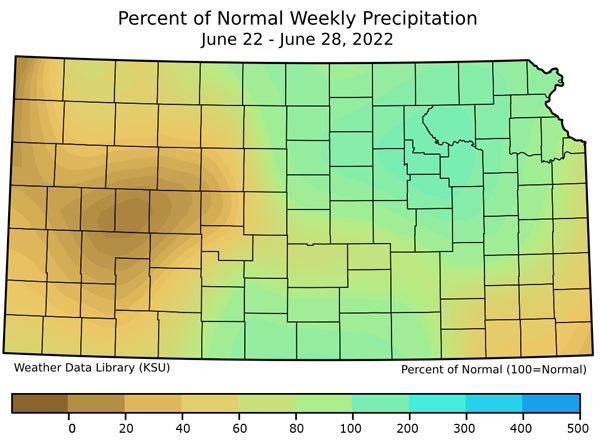 Figure 2. Percent of normal precipitation for the week. Map by the Kansas Weather Data Library.

With increased cloud cover and a cooler air mass, temperatures across Kansas averaged 1.9°F below normal for the week (Figure 3).  Southeast Kansas was the only part of the state that averaged above normal (+0.4°).  Southwest Kansas averaged the most below normal (-3.5°).   Even though the statewide average was below normal, there were some hot days.  Many locations in the western half of the state had highs near or over 100°F on both the afternoons of the 23rd and 24th.  Dodge City (Ford County) reached 102° on the 23rd and 106° on the 24th.  Hays (COOP, Ellis County) recorded the highest temperature of the week: 107° on the 24th.  The end of the period featured more comfortable conditions, with cooler temperatures.  Thirty of the Kansas Mesonet sites recorded lows in the 40s on the morning of the 28th, with Scott City 3SE (Scott County) the coldest at 41°.  The COOP observer 1 mile west of Tribune recorded a record low of 42°, 4 degrees colder than the previous record low for the 28th.  Record keeping at that site began in 1893. 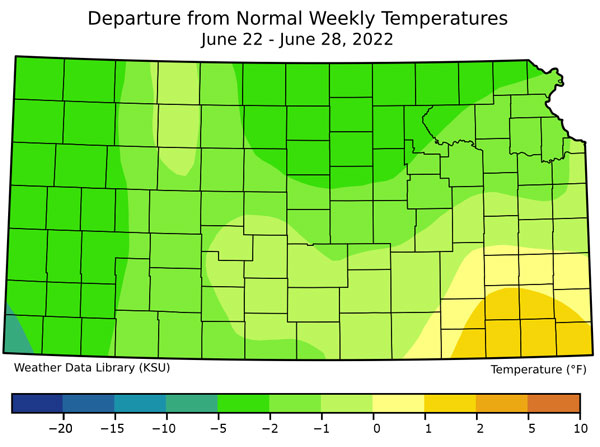 While parts of southeast and west central Kansas fell one class in the latest US Drought Monitor (i.e., worsening conditions), many areas of central Kansas improved one class (Figure 4).  A total of 43 percent of the state is classified as drought-free, an increase of 6% from last week (Figure 5).  This led to a composite Drought Severity Coverage Index (DSCI) decrease of 10 points from last week to 148.

The Weather Prediction Center’s 7-day total precipitation forecast, covering most of the first week of July, suggests northeast Kansas has the best chance at above normal precipitation, with the rest of the state seeing near or below normal precipitation (Figure 6). Temperatures will trend higher as we approach the 4th of July, with highs near or above 100° possible continuing through the week, particularly in western Kansas (Figure 7).

The 8 to 14-day outlook from the Climate Prediction Center forecasts a better than even chance of above normal temperatures statewide, especially in the east (Figure 8).  Precipitation is forecast to be near to below normal.  Should the precipitation forecast fail to verify, hot temperatures and little to no precipitation are never a good combination, as these conditions lead to worsening drought conditions. 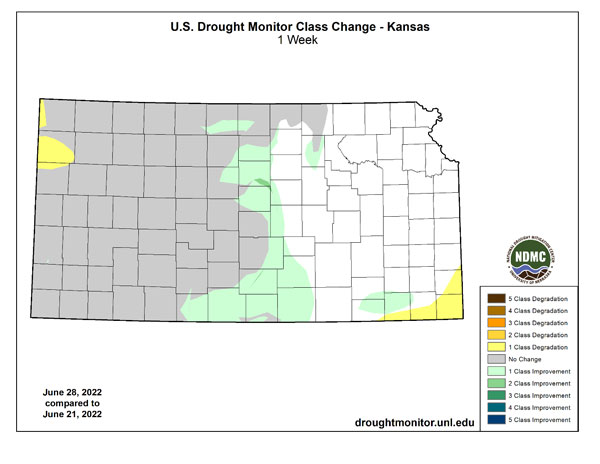 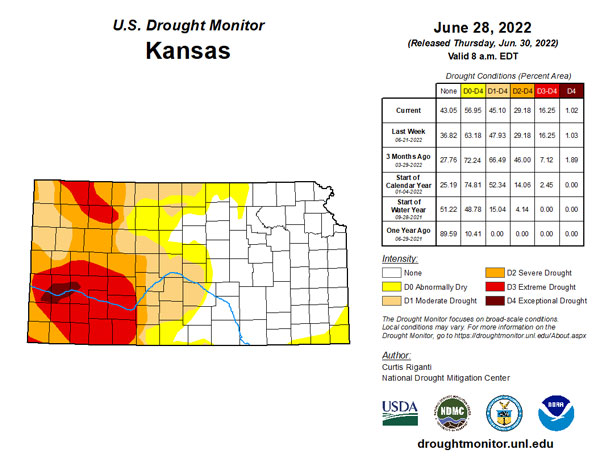 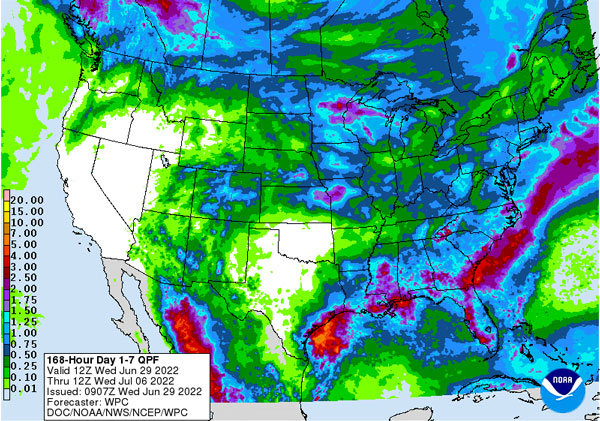 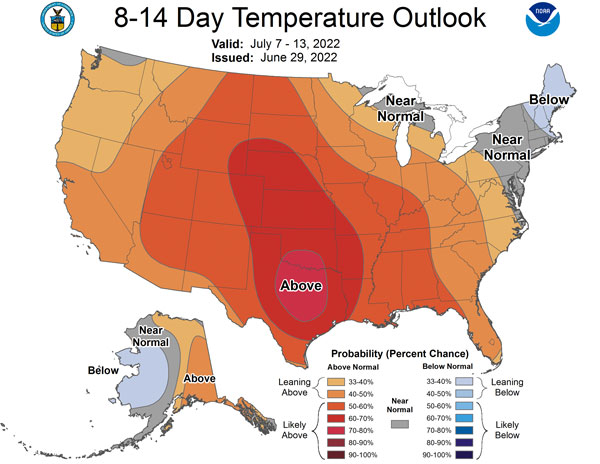 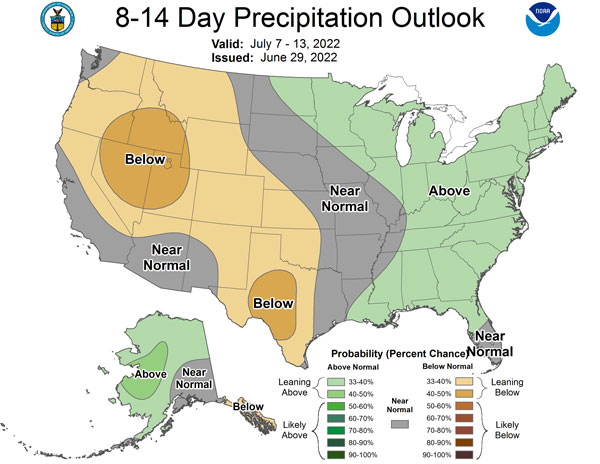